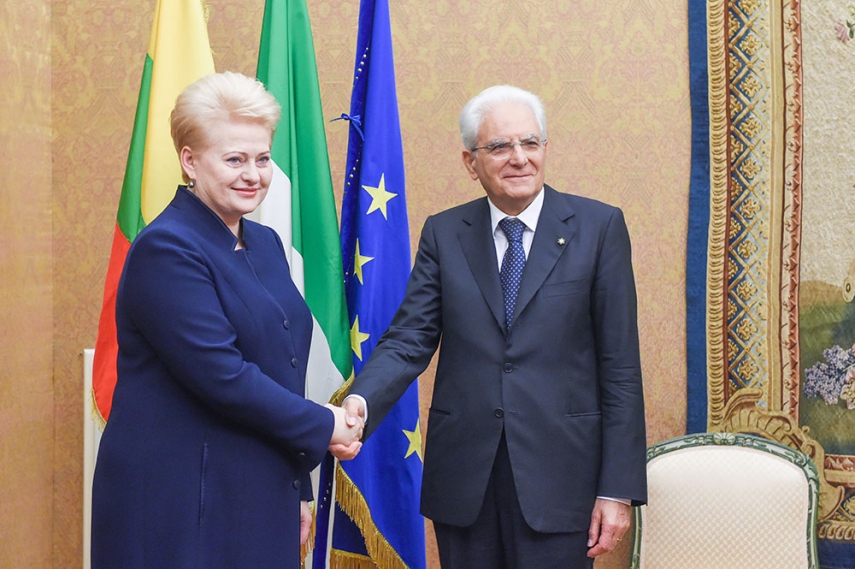 On June 15 2015, Lithuanian President Dalia Grybauskaite said the country is ready to take in its quota of refugees affected by the Mediterranean Refugee Crisis, but feels this measure alone will not solve human trafficking and immigration from North Africa.

Grybauskaite said without additional measures, she believes the European Commission's proposal of issuing quotas of refugees affected by the crisis to European Union member states could increase the amount of human trafficking from North Africa.

According to the Presidential Press Service, the issue was discussed with Italian President Sergio Mattarella during her state visit to Italy.

"We confirmed we are taking part in the migrant distribution program and helping lift the [refugee] burden from Italy, Greece and Malta," Grybauskaite told Lithuanian journalists present at the meeting.

According to the Lithuanian President, the refugees require assistance from the EU, but in part "this situation is used for the development of these [Northern African] countries' shadow economies."

"Only sharing and helping several countries to deal with the immigrant burden is not enough," said Grybasuakite. "It's a consequence."

"We have to think about what has caused people to flee, then invest in these countries so we don’t have these inflows [of immigrants].

"There's a much bigger problem and we discussed it with the Italian president.

"The passive distribution of immigrants will only encourage immigration even more," she continued. "Europe is being watched, and I have confirmation from the ambassadors of several North African countries who say if Europe passively solves this issue, immigration and the wish to enter Europe will increase," she concluded.

Lithuania will accept its quota of 250 refugees as proposed by the European Commission by 2017.

The specific number will be discussed by EU interior ministers next week.

In a bid to stop immigration from North Africa, the EU has stepped up border control in the Mediterranean Sea.

The EU has halted plans to destroy empty ships used for human trafficking from North African near its shores. Libyan officials refused to approve the operation.