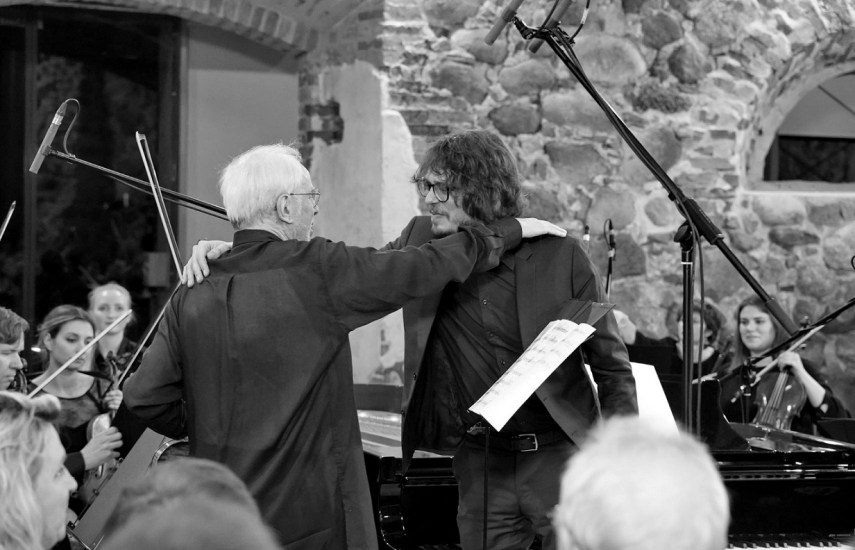 Latvia is a country that is fortunate to have many interesting newly built concert halls. Aside from those in Riga there are also several in other cities such as the Great Amber Hall in Liepāja, the Dzintari Concert Hall in Jūrmala, the White Grand Piano Hall in Sigulda and of course, the Cēsis Vidzeme Concert Hall.

In Cēsis Concert Hall, Gidon Kremer and his Kremerata Baltica gave on 3rd of March a truly extraordinary concert. Although Kremerata always reaches a very high standard, this concert was really something unique. The concert was titled “Tango” pointing to the Piazzolla which was part of their program. Next to it, Kremerata had a musical surprise.

Gidon Kremer has always been known for his innovative and bold choices of repertoire and his revival of composers who have been undeservedly forgotten. He states: “I want to bring the music to the audience, but if I believe in a score, then it doesn’t matter to me if one person or thousands will appreciate it. [--] Some day in the future people will appreciate it more, like they learned to appreciate Alfred Schnittke within the last twenty-five years. Now he seems to be an end of century classic.”

Gidon Kremer is also always supporting young musicians on their path. So, he has worked together with Daniil Trifonov, Seong-Jin Cho, Latvian talent Georgijs Osokins, Italian cellist Mario Brunello, Lithuanian conductor Mirga Gražynitė-Tyla. And he has worked together with French pianist Lucas Debargue who was one of the soloists at the event. Interestingly, it was Debargue who proposed a new musical idea to Kremer and Kremerata, the works of Polish composer Miłosz Magin. Magin lived in years 1929 – 1999 and spent half of his life in Paris.

Lucas Debargue speaks about his affection for Magin: “This idea, to play a concert and record Magin’s music I would never have even dared to think about without Gidon. He is a great inspiration! He chooses what he likes and Kremerata is following him. They pioneered playing Schnittke and Weinberg and now you see how Schnittke and Weinberg are played everywhere these days. When he proposed to me to be more active in Kremerata’s musical life, my first idea was to do something of Magin’s music. He is not known as a composer - more known among the pianists because he was the laureate of many competitions and recorded an impressive amount of Chopin music, but it’s amazing how many connections he had. In the 1970ties and 1980ties he was quite the important figure in the musical world of Paris.

I never met him in person, but he was a teacher of my first piano teacher madame Muenier and he was the greatest inspiration for her. I grew up with his music. I have a connection to this man not only as a composer but also as a pianist. He entered conservatory and started to really practice when he was a late teenager. Otherwise he learned music by himself. I can’t explain why I didn’t dare to connect with Magin’s daughter. But it’s amazing how things went. His granddaughter Alexandra wrote me a message on Facebook and then we could meet. We all spent a wonderful week in Lithuania with Gidon and Kremerata, working and recording Magin’s music.

It is an incredible feeling to rediscover music which is now not known and not played. Rediscovering a composer is a big responsibility, but it is something I have always wanted to do. At the Tchaikovsky competition it was the same with the Medtner Sonata, a piece that even the Russians didn’t really know.

When we practiced it with the orchestra it seemed like an easy score. But after some hours of playing everyone realized what difficulties there are and it’s really hard to keep the intonation precise all the time.

Magin’s active years as a composer were in the second half of the 20th century but he was never influenced by contemporary styles and experimentation. He developed his own very personal language, taking elements from Polish folk music and some individual harmonies. On one hand, it is music that you can appreciate on the first listening. It is not hard to get the structure, it’s rhythmically clear and has strong melodies. It is very intense and has strong passion inside.” The moment in Cēsis’ hall with Magin’s music was really the opening of something new. Debargue as the soloist at Magin’s 3rd Piano Concerto charged everything with his passion
and energy.

The second part of the concert was dedicated to Astor Piazzolla music. But before Piazzolla Kremerata played a piece of Latvian contemporary music, Arturs Maskats “Midnight in Riga”. The piece was commissioned and written for Kremerata and its soloists - Gidon Kremer and Giedrė Dirvanauskaitė. The composer here keeps in mind important people in his life and creates the nostalgic atmosphere of the old Riga in 1930th years – the time when Riga was called “the little Paris”.

Then the hall got wrapped inside Piazzolla’s timeless tangos. Kremerata played the “Grand Tango” and then “Celos and Fuga Y Misterio” with Gidon Kremer and Kremerata’s exceptional percussionist Andrey Pushkarev. All of them demonstrated wonderful unity and passion. The intense journey comes to an end with a special encore, Astor Piazzolla’s famous “Oblivion” in Gidon Kremer’s masterful rendition.