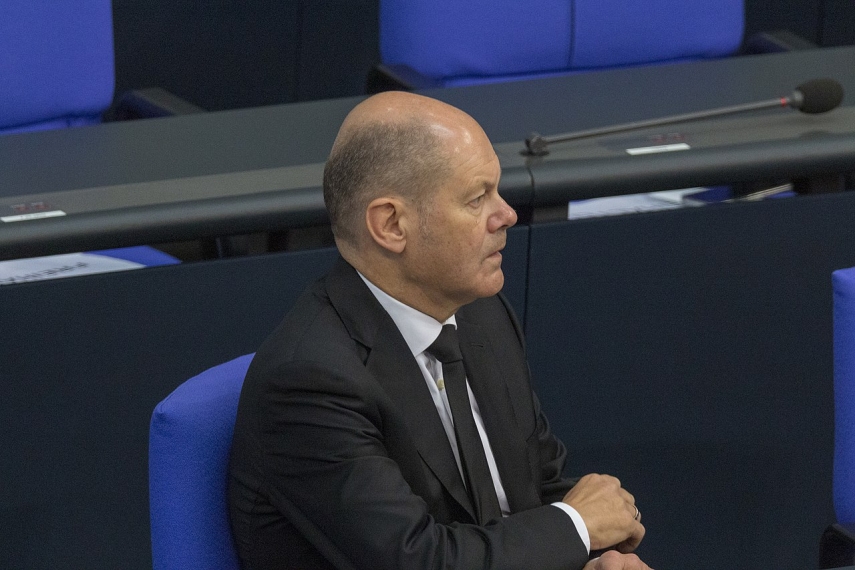 BERLIN - German Chancellor Olaf Scholz assured Germany's NATO partners in the Baltic region of support during a meeting in Berlin on Thursday with the leaders of Estonia, Latvia and Lithuania.

Russia has massed tens of thousands of troops close to Ukraine's borders, triggering fears that Moscow may be planning to invade. While the Kremlin has denied any such intention, Western leaders have been holding talks to try to avert conflict, the DPA news agency writes.

"We are united and determined," Scholz said, noting that the region was directly affected by Russian military activity.

"The need at the moment is for de-escalation," Scholz said, urging Russia not to underestimate the unity and steadfastness of NATO. "We take the concerns of our allies very seriously. We stand at your side. This is very important to me," he said.

"At the moment, nothing less is at stake than preventing war in Europe," Scholz said. He confirmed that Germany would send a further 350 troops to its units in Lithuania.

Russia and its ally Belarus launched joint military manoeuvres on Thursday in the midst of the crisis over Ukraine. All three Baltic republics share borders with Russia, and Latvia and Lithuania also have borders with Belarus.

"It is a matter of decisive importance that we strengthen NATO's eastern flank," Nauseda said. "Our alliance must be in a position to react rapidly and with determination in the region."

Kallas called on the European Union and NATO to show "unity, determination and strategic patience." Any sign of disunity or lack of determination could send the wrong signal to Russia, she said.

Karins emphasized that the EU and NATO had to "argue from a position of strength," adding that Germany's role was of "fundamental importance."

It was "essential" that Germany take a leading role in guiding EU and NATO member states through difficult times, Karins said.

After talks with Scholz, Kallas told DPA and Politico Thursday evening that Estonia was still waiting for Berlin's response on whether it could supply German-origin howitzers to Ukraine.

The howitzers had been sold first to Finland on the condition that Berlin would have to give its permission before they are sold to a third party, and then they were given to Estonia.

Taking German public opinion into account, she said it looked like the chances of success were unlikely. "Looking at your public opinion, it's rather that it's going to be a no," she said.

The approval process has become somewhat symbolic for those who have criticized Germany's reluctance to provide weapons to Ukraine while many of its allies have expressed willingness to send arms.

Berlin's opposition to delivering lethal arms is in line with its general stance of not supplying arms to crisis areas.

The Estonian defense ministry's request has been under way since December, and Kallas expressed surprise at how heated the discussion has become.

"We are feeling a bit uncomfortable that we are in the middle of this discussion," Kallas said.

Lithuanian Prime Minister Ingrid Simonyte announced on Thursday during a visit to Ukraine that Kyiv would soon receive anti-aircraft weapons from Vilnius.

The US-made Stinger missiles would arrive in the coming days, she wrote on Twitter. "I hope and sincerely wish that Ukraine never has to use them," she wrote.

"We must keep in mind that neither NATO nor the European Union has caused this crisis," Kallas said. She said NATO was not planning to attack anyone and is a defensive alliance. "So it is Russia who must de-escalate."

Kallas spoke out against making any concessions, saying the European security architecture had to be upheld and de-escalation could not come at gunpoint and at the expense of Ukraine.

"Anything seeing as an appeasement by Russia would send an encouraging signal to Russia and could lead to similar or even bolder strong-arm pressure elsewhere," Kallas added.

Some observers say Moscow may be seeking concessions from NATO, as the build-up of troops came as the Kremlin demanded that NATO halt its eastward expansion and pledge to never admit Ukraine.