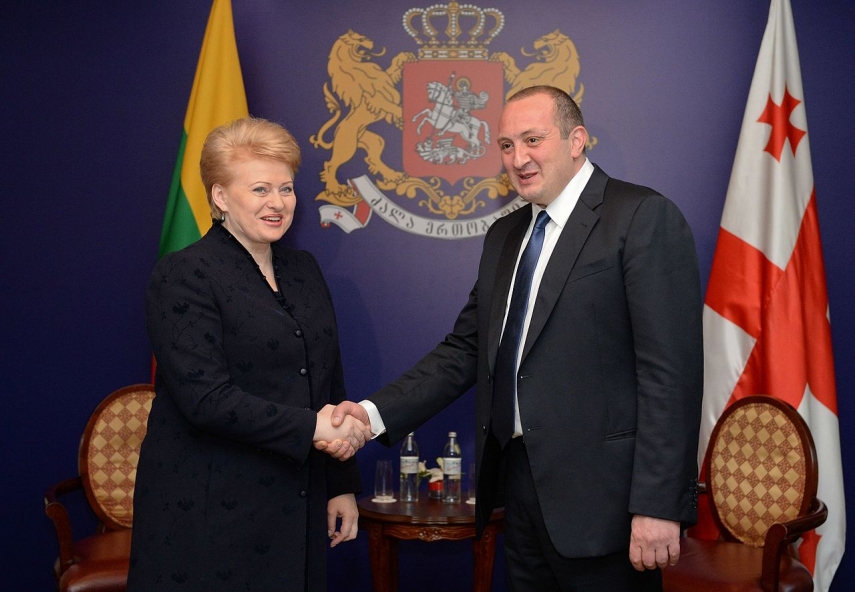 TBILISI/VILNIUS – Georgia's President Giorgi Margvelashvili says it would be more acceptable for Lithuanians to change the name of his country to Georgia or Sakartvelo, as the current Lithuanian-language name, Gruzija, reflects the Russian version of the name.

"In a way, the name in this case defines, through which country we associate each other. By calling us Gruzija, it was defining that our relationships are going through Russian direction and I think the change of name to a more bilateral, more appropriate format – be it European Georgia or Georgian Sakartvelo – is more descriptive of what our relationships are. We don't communicate to each other through the Russian vector, we have direct communication which could be Sakartvelo as bilateral or European format of Georgia," Margvelashvili told Lithuanian journalists in Tbilisi.

Lithuania's official language watchdog has found no reasons for changing the Lithuanian version of the name of Georgia, as the current version has a long history of use and a unique form that fits the Lithuanian language, adding that the authentic name of Sakartvelo was not used by any country in the European Union (EU).

The Georgian president said his country sought closer relations with residents of the occupied regions of South Ossetia and Abkhazia, however, was prevented by Russia.

"The occupation really happened not in 2008, the occupation happened in the beginning of 1990s, through the format we're now calling a 'hybrid war.' And from that starting moment, this was something that we had to pay, unfortunately, for our freedom, for our dignity to be an independent country and independent nation. And Russians did this, they envisioned that through the occupation, they would stop the development of Georgia," said the president, noting that 300,000 people had become refugees and needed to be taken care of.

"And the development means further integration to Europe and further democratization of our society and strengthening the state," he added.

In Margvelashvili's words, it is the insufficient response of the international community to the occupation of South Ossetia and Abkhazia that triggered the Russian aggression.

"Inclusion of the Georgia issue in the relationship with Russia strengthens the safety of Georgia and the rest of the region. Had we forced Russia back in 1990s and 2008 to pay for introduction of the military units into a peaceful neighboring country and the occupation of part of our country, the Ukrainian crisis would have been easier to forecast and prevent. They have learned the lesson, learned how to act, they were moving fast, they were much more organized than our allies for whom it was one more surprise after Georgia," he said.

"So I think being very clear and very sincere with Russians is a right thing to do. Russians are sincere, they're talking about their foreign policy, they're have their doctrine of privileged interest areas, they're speaking it out very openly. And they are openly talking about the Russian Federation's right to police and to influence its neighbors. And we have to be clear on responding to Russians, all the countries that believe in good will, international law, who believe in the rules of games among the countries," Margvelashvili told journalists.