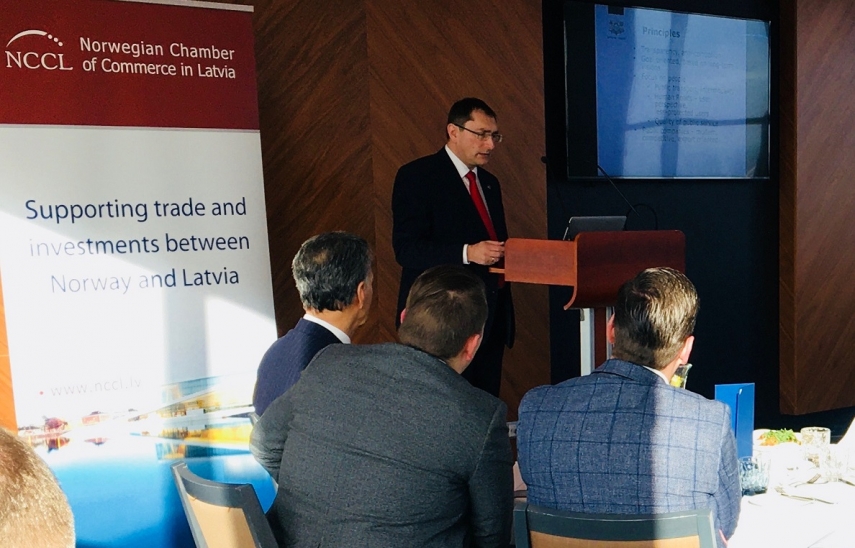 While there are internal politics at play for Latvia’s Transport Minister Tālis Linkaits to keep his job and pursue his vision, he appeared to instill confidence among Norwegian investors in Latvia, who surveyed the Minister at a business luncheon on February 5 seeking clarity on the future of Latvia’s transport infrastructure, mobility and connectivity. Among many projects under discussion, one of the central topics in the conversation was the progress of the Rail Baltica project, which the investors invited to see as a historic opportunity and catalyst for regional cooperation and creating positive spin off effects for the development of Riga, Latvia, and the whole Baltic region.

“I particularly appreciate that the Minister of Transport presented a long term vision, which we haven’t seen often before,” says the Chairman of the Norwegian Chamber of Commerce in Latvia Alf Erik Lundgrenn. “Since foreign investors make investment decisions in a long-term perspective, there needs to be clarity of where Latvia is heading in terms of its transport infrastructure, which is a absolutely critical for economic activity and growth,” adds Lundgrenn.

“Linstow as one of the leading real-estate developers in the Baltic countries highly appreciates Minister’s efforts to promote development of Rail Baltica project in integrated and cooperative way,” says Frode Gronvold, CEO of Linstow Center Management. “It is very important that this upcoming railway infrastructure project is seen as a catalyst for business development, connectivity, mobility and improvement of the adjacent urban spaces and landscapes also outside the railway line corridor”, says Gronvold citing the example of Oslo S / Bjorvika area in the capital of Norway, where the state, the city and private investors joined forces revamping a part of the city for the common good.

Norwegian investors appreciated hearing from the Minister of Transport that the cooperation with the Riga City has lately significantly improved and emphasized that it should be fostered further to ensure the successful implementation of the Rail Baltica project and impact on the cityscape and the overall development. In the conversation, the Minister of Transport introduced the timeframe for each of the initiatives ranging from this year up to 2040. In his presentation, Linkaits also outlined several windows of opportunity for participation in public procurements, be it in development of regional transport networks, Rail Baltica project, or road renovation.

Linkaits explained that his work is driven by principles of transparency and anti-corruption, which for a long time has mired the transport sector, goal-orientation based on a long-term vision and focusing on people and their needs. The last component involves creating a sustainable and well-integrated multimodal public transport system, addressing the needs of less-protected users and quality of service. In his remarks, the Minister projected mobility shift from the private to public transport, which, once in place, should provide more sustainable and environmentally friendly transport solutions.

Among many questions asked, representatives of the tourism industry inquired about the possibility to expedite building the shuttle services to and from the Riga International Airport or at least fixing the tarmac. There were questions about electrification of the Latvian Railway network, regulation for the size of trucks permitted on Latvia’s roads, safety of public transport, cargo flows and announced layoffs at the Latvian Railway, as well as attraction of international shipping companies.

Responding to a question about the situation at Latvian ports after recent shake-up related to the U.S. imposed sanctions on mayor of Ventspils Aivars Lembergs affecting Freeport of Ventspils, Linkaits invited foreign investors to “trust the Latvian government”, which has recently taken over the control of Ports in Ventspils and Riga with a mission to ensure transparent, professional and strategic governance and increase their competitiveness in the region.

While the minister’s vision appears to be clear and resolution strong, it is pivotal to ensure political stability and stick to the long-term planning and implementation, after the meeting concluded discussants. As Linkaits jokingly stated, the government runs “from Thursday to Thursday” – the day when the Latvian Parliament convenes – and when the opposition parties could surprise the government with a no-confidence vote.

The discussion with the Minister of Transport, which was organized by the Norwegian Chamber of Commerce in Latvia, on February 5 was moderated by NCCL Vice-Chairman and Partner at Spīgulis & Kukainis Law Firm Matīss Kukainis.