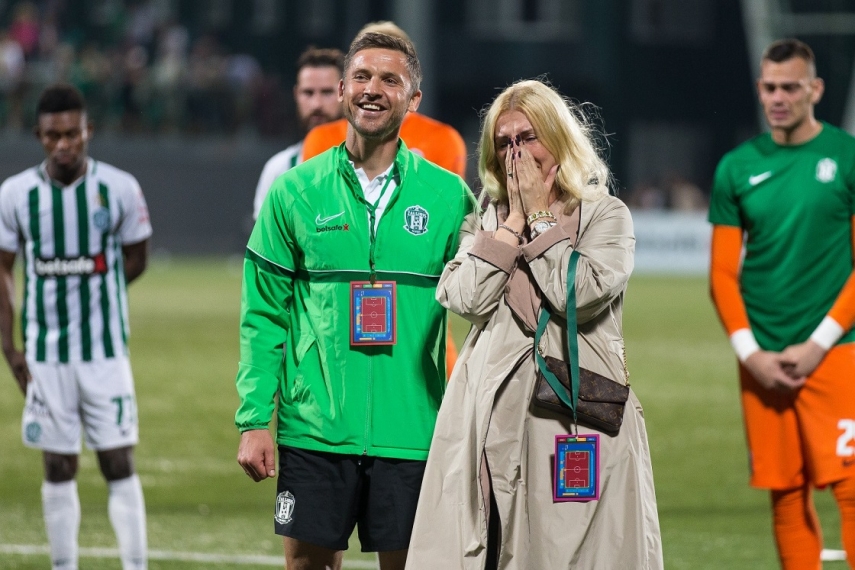 As you make your way through the gates into the Lithuanian Football Federation (LFF) Stadium, you can immediately spot her. Amongst the hustle and bustle of the spectators and the boisterous roars coming from the Pietu-IV - Futbolo Klubas Zalgiris's most hardened supporters, stands an imposing yet radiant-like figure strolling anxiously back and forth upon the rooftop of the east stand. You may find yourself asking: “Who is that?” – well, that projected figure happens to be Vilma Venslovaitiene, the woman who is not only spearheading FK Zalgiris, but Lithuanian football into a new dawn. In an exclusive interview, The Baltic Times Magazine caught up with Vilma Venslovaitiene to gain a further insight into FK Zalgiris’s recent success as well as Vilma’s journey into the world of football.

What is the key to our success? It’s a result of having a competent group of people who want to achieve their dreams and achieve something special in order to leave a legacy behind them rather than going through the motions of life. My goals for the team have been set according to this. Secondly, you need ‘love’ – a passion for what you do. Without love, you cannot achieve big things. Thirdly, a saying that I mention often: “beat yourself to beat the world”. A person can either create or break. In order to create something, you need to get over yourself to do what is necessary.

These principles also apply to me. When I first started this journey of reviving FK Zalgiris, I understood almost immediately that I could not leave this post as this club is a gargantuan of Lithuanian football and its remarkable supporters were involved in the independence movement at the end of the 1980s. When I took on this responsibility, I told myself that I can only depart when I feel our objectives have been achieved. I also explained this to everyone else at the time that we cannot just leave without finishing what we started.

The UEFA Conference League – in the end, it was not quite meant to be. However, the club undoubtedly created history in 2022 by qualifying for the group stages of the competition gaining a notable victory against Football Club Pyunik Yerevan of Armenia and a well-earned draw against experienced Swiss outfit, Fussball Club Basel 1893. What did you learn, experience and feel throughout this season’s European adventure? Can the club go a step further next season?

We were all devastated that we did not get through the group stages of the UEFA Conference League. It was not meant to be in the end, but we will most certainly do our homework to be ready for next season. I was fortunate to find an excellent coach – Vladimir Cheburin, who happens to be the best coach whom I have worked with in football. The results that we achieve are also due to him, the playing squad and all of the staff.

Matches in UEFA competitions possess a different kind of feeling altogether. It’s a football fairy tale that you never want to end! However, a lot depends on the yearly budget. We cannot purchase players, only sign them on a free-transfer. The players that are available usually have been without a club for months. Therefore, as I always say, our goal is to create miracles. Many agents understand what we are searching for, figuratively speaking, determined and motivated players - those who performed very well but were unfortunate in some kind of way. Our objectives for next season will depend on what players we are able to keep hold of and who we can find in the transfer market. We will aim high, but in football it’s not just about the president, director or coach – it’s about the players. All of us must stick together, just like a family. The supporters share our dreams and we will continue to strive for them.

Unfortunately, despite improvements, professional football is still very much a male-dominated sport. It’s completely atypical that a female figure holds such a position of authority in a football club as you do, especially in the context of Lithuanian football. Does being a female chairwoman bring more added scrutiny and criticism than one would normally expect? Can you explain to us some of the hardships which you have faced being a woman in a sport that contains many machismo-like characters?

Football is indeed a male-dominated sport. Honestly, it was extremely difficult to get to this point, to put it mildly. I just had to get on with my job and ignore other scenarios happening in the background – if I arrived at FK Zalgiris and did not perform well in my job, both my name and reputation would be on the line. To put it bluntly, the term ‘easy’ does not exist in any kind of job. If you are someone who spends too much time listening to what others are saying about you, then you should simply not work in this area or take a leading role somewhere. The most difficult thing for me personally, as a woman who is working with the team every day and attending almost all of the training sessions and meetings, is that I cannot be in the dressing room on matchdays. I feel a bit lost and I do not receive any information regarding what is happening within the squad etc. This is what I miss out on the most because I am a female.

A chairwoman or chairman can often be found seated in a comfortable section of a stadium enjoying a glass of champagne while engaging in conversation with other senior or well-known figures. Vilma Venslovaitiene, however, can be frequently spotted strolling along the roof of the LFF Stadium, occasionally enjoying the odd cigarette to settle any nerves! Why exactly do you watch games standing on the roof, often alone, instead of sitting down?

I must tell you that I’m not only the chairwoman, but also the director and the sporting director. At our stadium, as modest as it is, we try to welcome as many VIP guests as we can, therefore, there is no space left for me to sit in a more comfortable section. I do hope that there shall be a nice space available for me in the new stadium!

Why do I want to stand alone on the roof? Well, after 13 years here, FK Zalgiris has become an enormous part of my life. I can truthfully tell you that I’ve spent some of the best years of my life at this club. The point that I’m trying to make is that it’s too difficult for me to be in the stands and to hear all the noise. It’s very normal that people come to matches and display their emotions - happy or sad ones. Personally, I prefer to avoid the atmosphere and be in a calm place where I can focus and think about the next objective. The following day, you may have to speak about the game and enquire about what happened across the course of the ninety-minutes. Chatting away with someone or sipping on some champagne – you would not see that from me. To me, football is not a show, it’s my life and my profession. Working at FK Zalgiris is not just a job, in essence it’s something larger than life itself. I want to create miracles! For that, I need to be focused and not to be distracted by anything.