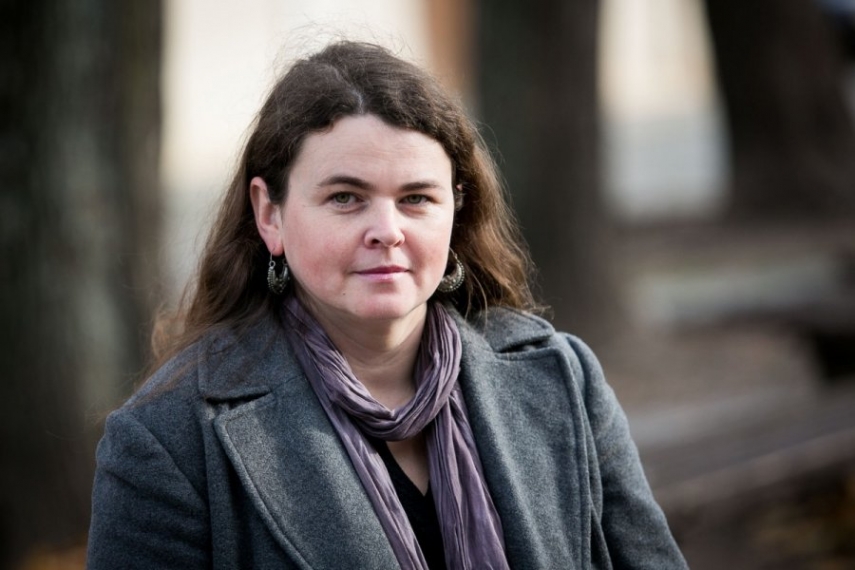 KLAIPEDA - Single Lithuanian artists make a living from what they do best: creating art. The majority, meanwhile, ekes out juggling various jobs to make ends meet, while a few are outspoken activists for human rights or a social cause. But Vilma Fiokla Kiure, an artist and a staunch human rights defender, who usually goes by the moniker, Fiokla, has perhaps been a stand-out among the creators, taking the civic expressions of art further, bending the boundaries and unfazed by the fury-prone public. The Baltic Times sat down to talk to this daring artist.

Browsing the web turns up an array of your descriptions: from an independent artist, to poet, feminist, decorator and to human rights activist. How do you see yourself first?

Frankly, I always get confused when somebody asks me this. Just because the art I produce and the activism I am engaged does not reflect at all what I feel and endure encountering all the realities of life.
Tersely speaking, I do not want to put any labels on myself. I’d prefer, frankly, being called a human being, one who cares about others. Remaining a human in this alienated world is really very important, I believe.

Still, devoted to the Muse the way you see it, you are a civic activist, capable of triggering rage like in a recent gathering against conscription, an appearance that has drawn condemnation by many.

I believe that art, and creation on the whole, is a live action, which does have to get reflected in a way on artworks, in one way or another.
Just in some of them you can see perhaps more or less politics while others are about aesthetics and pure art.

How do you believe the recent gathering against “militarization of Lithuania and conscription”, part of which you were, interacts with art and citizenship?

Indeed, I was among the young people and I delivered a speech supporting them. To say once and for all, I do see danger from Russia, but I believe that despite our efforts to withstand it we are hopelessly losing [the battle]. Just because we have failed to create an open society able to show solidarity when it matters.
I have a friend of mine in Visaginas [a town in eastern Lithuania known for the being decommissioned nuclear power plant-L.J] who encountered horrible homophobia upon returning from London.
Aghast, she tells me that wherever she goes in the town she hears all talking virtually about the same — pedophiles and homosexuals.
Furthermore, that Putin will save all the children from the plot by the paedophiles and homosexuals in the West.
This where the biggest danger lurks, as however irrelevant it may sound, homophobic citizens see Putin as their savior.

What do you believe to be wrong about conscription amid the geopolitical tensions?

When it comes to conscription, I believe that it disunites society and has pushed part of it torward Putin’s embrace. Just because of the contempt to the youth who disobey or are against the conscription and who therefore are put up for public ridicule.
Just because I voice my opinion which is opposing the official views some, I heard, call me a Russian agent. But this is ridiculous! I have been a staunch supporter of Ukraine, let all hear it.
Although I can certainly appreciate what Lithuania has the best — it always comes in comparisons, in my case, against Belarus, which I visited a year-half ago — I am still fearful that we are racing towards an authoritarian system and becoming similar to Russia and Belarus, which makes me sad.
The information warfare and propaganda that we are talking a lot about nowadays cannot be solely Russian, nor Lithuanian, just because it seeks to manipulate the mind. Let’s admit, it is streaming both ways.

Are you implying that artists are being forced, too, to take a “proper stand” amid the roughed up geopolitics? Do you see many attempts, like during the Soviet era, to get artists engaged in the information (art) warfare?

Like in any political formation, there are attempts of the kind and there will always be artists pandering to the political hierarchy.
That being said, please note, there will always be some underground artists, who bristle against the attempt. I am obviously among the latter.
I believe that every artist draws the line himself or herself in deciding how big a sacrifice they can make for the sake of freedom of the word and of art.

Is it easy to make a living for an artist in Lithuania?

Absolutely not. Most of my peers get extra jobs to get it through. But this is how not only in Lithuania, but in the richer Western countries, too. Only single artists can guarantee livelihood from their art.

How has the country‘s evolution, from the restoration of Lithuania‘s Independence to the accession to the European Union, changed your personal life as an artist?

The change, certainly, has been huge, with many of the artists “Europeanized.” What I mean by it that, after the break-up of the Soviet Union, the borders opened up and all the Lithuanian artists have become very interesting to the art curators in the West.
Thence the abundant invitations to attend international exhibitions and events and so on. I had criss-crossed nearly all of Europe well before Lithuania became part of the European Union.

I know that you‘re spending quite a lot of your time on the road, going back and forth to work to Vilnius on the weekdays and making it back to a rural village on your weekends. Can you tell a bit about your “rural“ experiences? How do the villagers accept you, an obvious stand-out?

Indeed, life brings me to the very heart of Vilnius’ Old City during the weekdays, but I end up being in a bucolic area on my off days. That allows me experience the gamut of all life‘s colors and tints.
As an Old City resident, I deal with the most acute issues of the city, including the pollution, traffic jams, and noise, so, understandably, I seek solace in my countryside refuge on the weekend.
I really love wild nature, the meadows and wonderful forests that escaped Soviet melioration. But to be honest, I tend to get into chats with the villagers very little, apart saying that I buy ecologic provisions from a few local farmers. They are indeed hard-working and sincere people.
But I can’t not mention that the deserting villages around, including the one in which I dwell, have been abundant with other kinds of people, whose days are all about booze and who, having lost any hope for a change in the life, are giving up.
After a recent weekend, I missed a blossoming bush of forsythia in my yard; somebody pinched it, perhaps for an occasion. As a single occasion and personal experience it may seem to be, but that is happening in the village nearly daily — what is unlocked will get snitched by someone. Not surprisingly, the villages are getting more and more deserted. Living in the hinterland is an obvious challenge.

I‘ve read that you had to deal with your neighbors’ fury after one of your performances — re-writing the national anthem from a feminist‘s point of view.
I was under attack by the worst of the scum. When it comes to the description, the police have confirmed the violent people stand up to it. Just because I‘m sort of a local outcast, they had terrorized my family before, but the publicity over the anthem’s alteration has triggered the flare-up.
But again, I do not want to see it as a personal case and the ambush was not just about the notoriety of the otherwise artistic expression. For me, it was about the hate for “those smug townies”, who are looked down on by some of the villagers.
The contempt derives from the anger some of those unhappy villagers have and tend to vent out it against those who do not belong to them.
What make things worse is that virtually  no one tackles the issues of the people. Getting them behind bars does not do any good, as after the imprisonment they tend to be even more abusive to their spouses and neighbors.
Ironically, this is the category of people who yearn for an authoritarian ruler and autocracy. Obviously, they are most susceptible to the most primitive propaganda.

Nevertheless, you have to agree that some of your artistic performances, like that one with the anthem, are understandably seen offensive and combustible, to say at least.  Where do you see the line between art, stunt and social experiment, if any?

The performance which was called as “re-writing national anthem” by some of the nemeses was done, in a quite humorous way, by a group of artists sympathizing feminism ideas in an endeavor to draw attention not only on them, but essentially to women’s rights altogether, which I support, therefore I got engaged in the performance.
Frankly, it was aiming a small bunch of friend artists, not the wide public. Honestly, we did not expect the notoriety and backlash, but, at the end of the day, the whole thing got heavily politicized and criminalized.
By people who have nothing to do with art, by the way, who cannot grasp the language of modern art. So, at the end, the social experiment has been besmeared and the culprits, the artists, had to go through the criminal investigation. Like “The Pussy Riots” band, as some analysts justly pointed out.
I always wonder what the term “sacrilegious”— that is how some people called our performance — contains? In a wider meaning, the term, I reckon, has a connotation of something divine, belonging to God, but, hey, a hymn is just a mere hymn, in other words, a psalm meant to fire up the nation. But worship it and make it tantamount to sanctity is, well, a form of idolatry. I am really dumbfounded to see it happening in Lithuania, a Christian country.

Anyways, you cannot deny your rebellious side.

Quite on opposite, I think I am an exemplary citizen. I’ve never had any run-ins with police over the traffic rules’ violation over 20 year at the wheel. I pay taxes on time and do not owe anything to anyone.
To make it through, I have to tear myself apart to make ends meets not to get in debt. That is the picture of most artists around.
To eke out, I sometimes do lodging repairs and decorations works, among other things. But it works- for my personal freedom and the art, too.