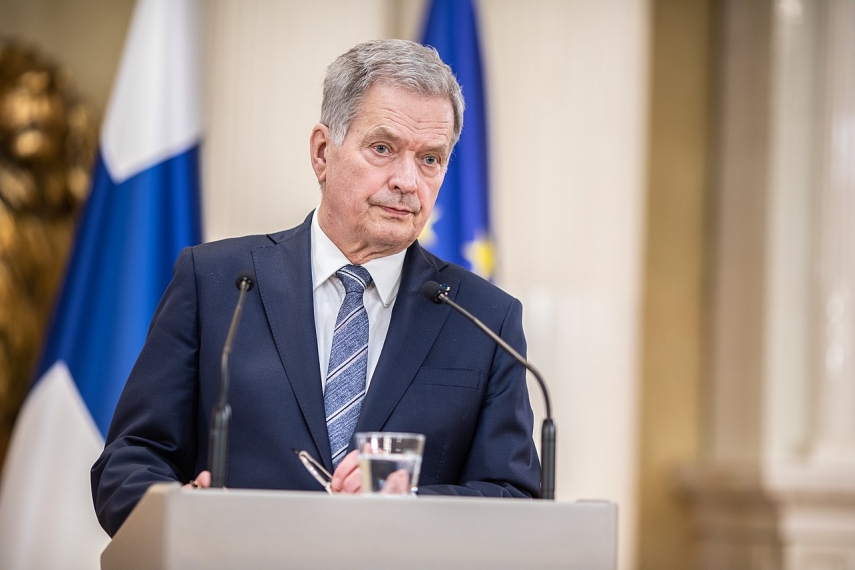 RIGA - Moscow does not have to be given any security guarantees, Finnish President Sauli Niinisto, who on Monday was attending a meeting of heads of state and government from Joint Expeditionary Force (JEF) partner nations in Riga, said while commenting French President Emmanuel Macron's statements.

During an interview which aired on French TV channel TF1 last Saturday, Macron said Europe needs to prepare the continent's future security architecture and must consider "how to give guarantees to Russia".

"I do not agree that Moscow should be given any security guarantees," the Finnish president told journalists shortly before the JEF meeting, pointing out that it is Europe which is under threat.

Niinisto noted that since the last meeting, the situation has substantially changed and the war in Ukraine is ongoing.

At today's meeting, Niinisto would like to discuss further cooperation in all areas, particularly in NATO.

Times have changed. Now we have to think about entirely different cooperation directions. The key issues differ on all parts of Europe. The Baltics have their own painful issues, while the North have others. Completely different issues are being considered elsewhere in Europe. But in my opinion, it is paramount to listen to one another, find the middle-way, and whatever happens, cooperate more closely, the Finnish president said.

Commenting Macron's statement, Lithuanian President Gitanas Nauseda told journalists that  to receive guarantees Russia must withdraw its forces from Ukraine and becomes a normal civilized country. "Now we see that it is us and Ukraine who need security guarantees," Nauseda said.

The Lithuanian president noted that Ukraine is being attacked with missiles on a daily basis. We are talking about a country which in the 21st century is following an unthinkable policy by invading a sovereign European state, Nauseda said.

Nauseda underscored the importance of implementing the commitments made at the NATO summit in Madrid. It is also important that Finland and Sweden join NATO as soon as possible, ideally before the next NATO summit, which Vilnius is due to host in summer 2023.

Sweden's Prime Minister Ulf Kristersson also noted in his brief comment to journalists that there is no need to provide any guarantees to Russia, reminding that it was not the West who invaded a neighbor country. At the same time, Kristersson welcomed the fact that since the start of the war, Europe has been united in its stance against Russia.

The Swedish prime minister has no doubts that Sweden will join NATO soon, thus strengthening the region's security.

Latvian Prime Minister Krisjanis Karins (New Unity) indicated that nobody has any illusions that the only threat to the region is Russia and that everything in our power has to be done to support Ukraine, "as long as and as much as necessary".

We have to avoid speaking about some premature peace process in Ukraine, a peace process Russia might take advantage of to regroup and attack Ukraine even more fiercely, Karins said.

The Latvian prime minister also underlined the importance of the JEB in building security. "The JEB is extremely significant - as one of NATO's so to say co-workers," Karins said.

As reported, Riga is hosting the third summit of the Joint Expeditionary Force (JEF) on Monday.