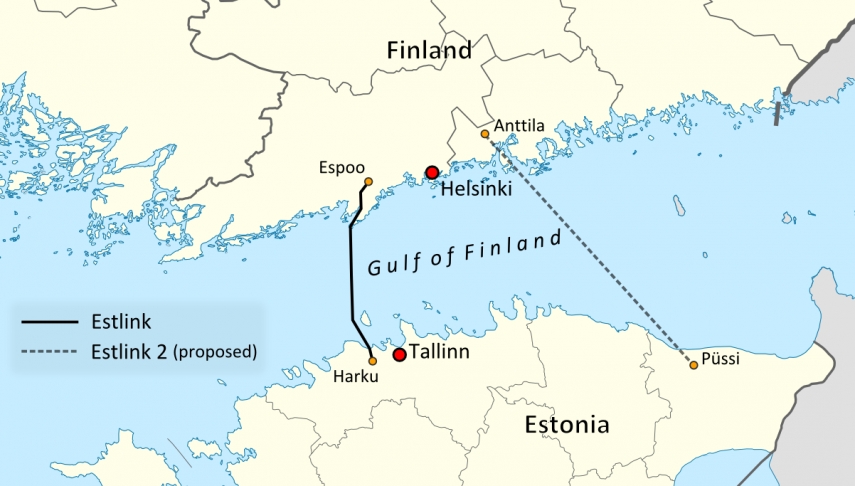 The Finnish government has vowed to apply for EU funds to link their gas network with Estonia’s, defying concerns from its state run gas company.
Connecting the gas networks of the two countries for the first time would open Finland up to competition and tie in the Nordic country with EU gas transmission networks in central and eastern Europe, Finnish and Estonian officials have said.
The proposed project, known as the Balticconnector, includes an underwater gas transmission pipeline that spans 81 kilometres across the seabed of the Gulf of Finland, with compressor stations on both coasts.

According to the proposal, the Balticconnector would allow for gas flows of up to 7.2 million cubic meters per day and the total cost is estimated at 250 million euros.
Following a ministerial committee meeting where Finland’s decision was made last Friday, Olli Rehn, Finland’s minister of economic affairs, said the project would be impossible without 75 per cent of the cost being covered by the EU’s Connecting Europe Facility.
The deadline for proposals is Oct. 14 and both governments have now resolved to file the Balticconnector proposal jointly, having come to terms regarding the division of the remaining 25 percent of costs.

But the Finnish energy group Gasum, which oversaw the project’s planning together with the Estonian transmission system operator Elering, has warned that the project is not commercially viable and has backed away from the project.
“The Finnish gas market and its future outlook have changed substantially since 2008 when plans for the projects were initiated,” the company stated in a press release last Friday. “The competitiveness of gas has deteriorated and gas consumption has decreased.”

Gasum has stated instead that it is committed to the active development of gas in the Nordic region rather than fostering costly connections with Estonia, and to do so with domestic Liquified Natural Gas (LNG) terminals.
“Gasum is investing constantly in the development of Finnish gas infrastructure. Our key objectives are to ensure our customers’ access to clean and competitive fuels and at the same time develop the Finnish biogas market and Nordic LNG market,” Gasum CEO Johanna Lamminen is quoted as saying.

The Finnish government’s decision, however, will mean the creation of a new state company to oversee the Balticconnnector project regardless of Gasum’s objections, subject to the EU approving funding.
Some Estonian analysts believe Gasum’s involvement in the project will not be missed, accusing the company of dragging its feet from the start. “Gasum has a vested interest in the status quo,” says Emmet Tuohy, a Research Fellow at the Tallinn-based International Centre for Defence and Security, a think tank.

“It makes considerable profits bringing in pipeline gas from Russia, profits it can invest in smaller-scale LNG terminals aimed at the marine shipping and industrial markets,” he tells The Baltic Times. “It has no incentive to change.”
“But the region as a whole would very much benefit from the pipeline,” he adds. “Regional companies would be able to negotiate more effectively with outside suppliers of LNG, given the greater commercial attractiveness of an integrated market (with its significantly higher demand). Another factor is that Gazprom is more likely to renegotiate supply agreements if the region has alternatives.”

The Finnish Government’s decision was applauded by Estonian officials. “This is a very positive decision,” chairman of the board of the Estonian transmission system operator Elering Taavi Veskimagi told BNS. “We have put in a lot of effort to submit an application in the second call for proposals for projects of common interest already this fall.”
“The necessary documents for lodging a funding application for Balticconnector basically exist. The project certainly has advanced to such a stage of readiness that, now that a political decision has been made in both countries, it can be submitted to the second round of funding applications,” he added. “Approval of this application by regulators and ministries is still required. I believe that now that both countries’ political decision is in place this can be achieved within the said time frame.”

According to Veskimagi, he is unable and unwilling to comment on Gasum’s decision to back out. “From our perspective, it has no importance which concrete legal entity on the Finnish side is in charge; it’s for the Finnish state to decide how they will organize their gas market in the future,” he added.

Russia has watched on in consternation as energy link ups between EU member states in the Baltic Sea region have gotten underway — a result of policy makers in Brussels pushing for diversified energy supplies to counter dependence of some EU member states on Russia.

During an interview with the US TV channel CBS, Putin expressed dismay and alarm at the process of integrating Nordic-Baltic energy networks with central and western Europe’s. “In practice, it means that a number of zones will emerge between several regions of the Russian Federation, where we will have no power transmission lines, since previously we used to have a loop transition through the Baltic countries,” he said in conversation with TV presenter Charlie Rose. “And it means that we will have to reform the system, spending billions of dollars, as well as our European partners who will also have to spend billions of dollars to integrate the Baltic countries into their power grid. What for?”

Analysts acknowledge that the Baltic states’ plan to integrate into the European grid might lead to the isolation of the Russian region of Kaliningrad, wedged between Lithuania and Poland, and raise tension in relations with Moscow.
At the moment, the Baltic States’ power systems still synchronically operate with Russia as part of the so-called BRELL ring, linking Belarus, Russia, Estonia, Latvia, and Lithuania. It means that certain key parameters of the Baltic systems are centrally-controlled by Moscow.

The Baltic states want to become part of the European grid to free themselves from Moscow’s influence in the energy sector.
Lithuanian President Dalia Grybauskaite has said the synchronization with continental Europe would step up Lithuania’s energy security and political independence.