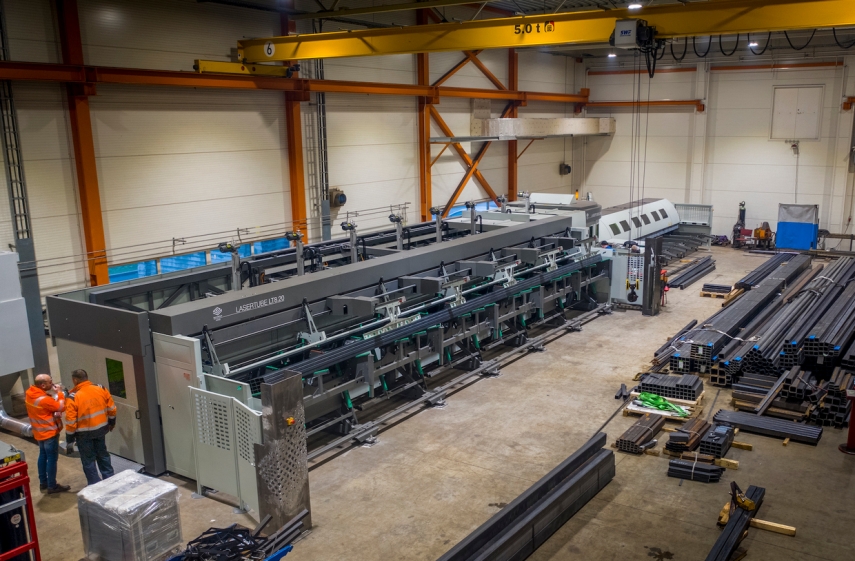 According to FinEst-Hall Factory board member Jaanus Laane, the new device speeds up the preparation of parts for production more than ten times.

"There is a significant decrease in the preparation of craft parts, and the accuracy in both time and quality improves. The new tube laser is a natural continuation in the development of our production; all operations can be done by one machine with a couple of operators; after all, it is no longer reasonable to produce with a band saw, disc cutter, and drill press. Our engineers can now design more complex parts, the manufacture of which is much faster and easier than before. In addition, the new devices are greener and consume significantly less energy than their predecessors, and production logistics are simpler and faster," he explains.

The goal of Fin-Est Hall is to digitize all processes and automate them as much as possible; based on this, the company has planned its next investments.

Martin Ivanov, the sales director of FinEst-Hall, describing the market situation, says that despite certain anxiety of customers, inquiries are constantly coming. Those who previously planned to build a warm warehouse now think rather about a cheaper solution that is easier to install and dismantle. "It can be felt that the market is looking for cost-effective solutions. There is a lot of research into how to integrate solar panels onto a PVC hangar. We have thought about it, and our first prototype of the Solar Hall is being installed today. Thanks to the tube laser, we can optimize our production and set up warehouses even faster," says the sales director. According to him, the market volume of PVC hangars in Estonia is nearly 15 million euros. The corresponding market volume in Finland is estimated to reach 65-70 million euros. FinEst-Hall Factory has about 40 percent market share in Estonia and a considerable market share in Finland. The expansion plans envisage an increase in sales revenue of more than 10 million euros by 2024 and the opening of sales offices in Scandinavia.

FinEst-Hall Factory OÜ is a manufacturer and installer of PVC hangars, the company that started under the name Steel Express has been operating for 12 years. During this time, more than 300,000 square meters of PVC hangars have been manufactured and installed. Since December 2021, FinEst-Hall has been operating in a new 5,500-square-meter factory in Ringtee Tehnopark, where almost 40 people are employed. FinEst-Hall manufactures PVC products, tube lasers, and plasma parts as an outsourcing service. The company has carried out work in Latvia, Lithuania, Finland, Norway, France, Portugal, and even Komi Oblast.