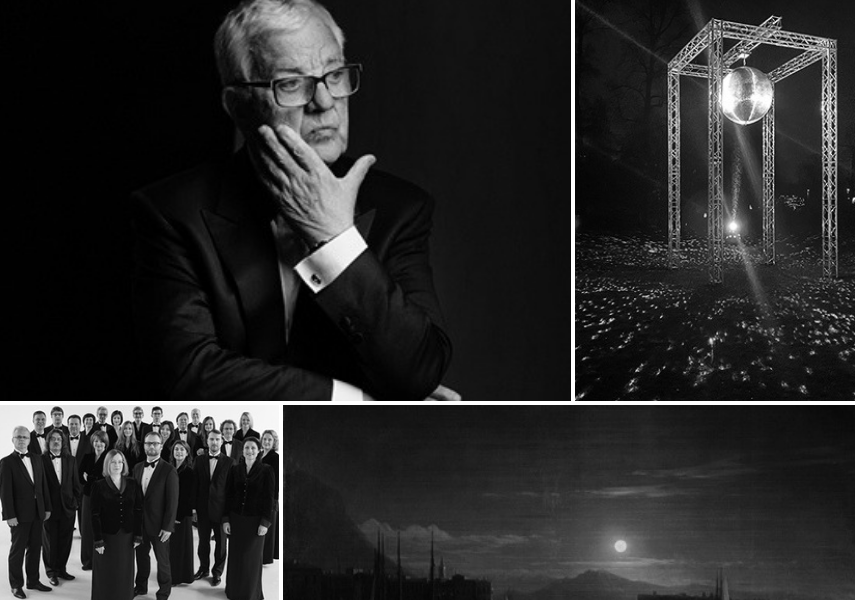 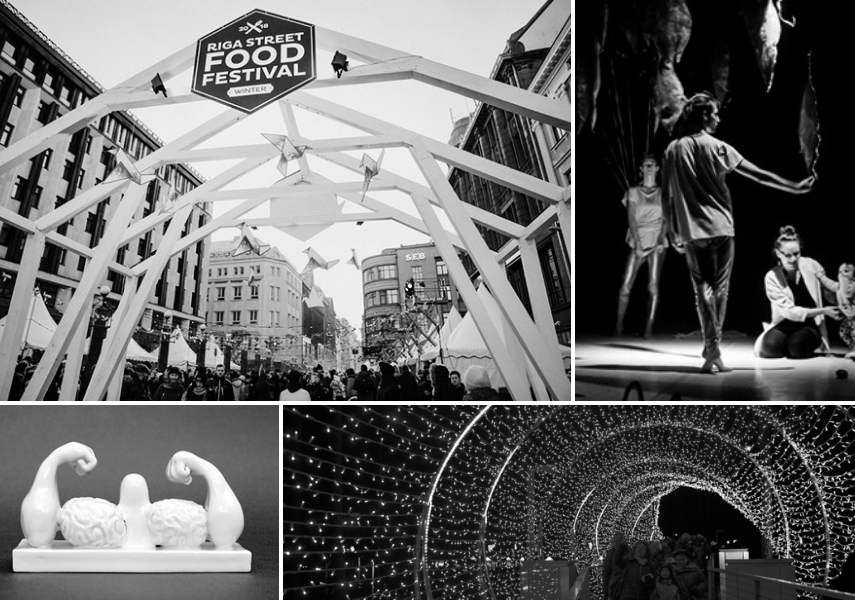 Maire Mannik (1922–2003) was a sculptor who lived and worked in Paris for decades after World War II and studied with the famous Russian-French artist Ossip Zadkine. In her work, she combined motifs of nature with abstract elements. In 2004, her son donated most of her studio legacy to the Republic of Estonia. For more information please visit www.kumu.ekm.ee

Launched nine years ago by a group of enterprising Finnish filmmakers in Helsinki, the DocPoint documentary film festival has since gone on to become a prestigious event throughout Europe. For full information on the films, program and tickets please go to www.docpoint.ee/en/

The New Year Gala concerts at the Latvian National Opera sparkle like Champaign. Let’s celebrate together with the most enchanting opera melodies and musical stars! More info is available at www.opera.lv

Open till January 04, Solo Exhibition by Juris Dimiters ‘The Signs of My Time’, MuseumLV, Riga

Juris Dimiters is a socially active artist who creates posters in response to current world events. As a true magician, he moves the viewer through time and space, becoming a theatrical stage designer. The artist does not lose the presence of irony in his paintings, however his works are very intricate and always surprise with a metaphysical mood. This time, by revealing the secret facets of his artistic personality, Dimiters’ alter-ego, or avatar, speaks to us about his attitude to what is taking place in this world and the time we live in, using new means of expression. The entrance to the exhibition is free.

Artist of Armenian descent Ivan Aivazovsky (1817-1900) is a world renowned sea landscape master, who already during his lifetime was admired by his contemporaries. The exhibition will show artist’s works from various periods, where light and illumination are the main components of the composition. There will be around 30 works in various genres at the exhibition: marines, historical compositions and landscapes. The tickets price range EUR 1.60-3.50.

Open till January 05,
Winter Garden of Light, the Botanical Garden of the University of Latvia, Riga

During the darker hours of December and January, the Winter Garden of Light will bring together 20 of Latvia’s best light artists where they will set up light installations to illuminate garden landscapes, and create a fabulous winter setting for unprecedented evening walks for visitors of all ages. To buy tickets online please go to www.bilesuserviss.lv

The Latvian Radio Choir, conducted by Sigvards Klava, invites to Orthodox Christmas concert featuring Pyotr Tchaikovsky’s Evening Prayers. The Latvian Radio Choir is one of the most in-demand professional chamber choirs in Europe. The choir’s special success is due to the extraordinary creative development of their work, which can be called a sound laboratory – choir singers regularly diversify their vocal arsenal, focusing on both the secrets of traditional singing and the art of quarter-tone and overtone singing. More information on the concert and ticket purchase is available at www.bilesuparadize.lv

Aleksandra Belcova (1892-1981) arrived in Riga in 1919 and is one of the first modernist artists in Latvia. She was not only a painter, but also an illustrator as well as a graphic and porcelain artist. In the 1920s she worked mainly in watercolor technique, but in the 1930s - pastel technique. In her work, Belcova preferred the portrait genre, depicting loved ones, friends and acquaintances. In her paintings, the artist often chose motifs from the folklore of different nations or created geometric abstract compositions, focusing on religious themes. The exhibition at the Latvian National Museum of Art features works by Aleksandra Belcova from several museum collections and private collections. This will be the first retrospective of such a large scale in honor of the artist, which will comprehensively showcase her versatile creative heritage. The tickets price range EUR 2.00-3.50.

On January 12, which is also Raimonds Pauls’ birthday, the maestro will perform together with his beloved Latvian Radio Big Band and talented singer Daumants Kalnins, and will feature the premier of the Southern Watercolors program. The latest program of Raimonds Pauls and the Latvian Radio Big Band focuses on the music of the maestro composed during the 1960s. It was a time when R. Pauls used a lot of jazz references – that he loves so much – in his music. More information on the concert and ticket purchase is available at www.bilesuparadize.lv

The exhibition features paintings from the V.I.V.A. collective of artists from Latgale – Vesma Uspele, Ilze Griezane, Vija Stupane, Agra Ritina, who were recognized at the annual Janis Pigoznis Award in Latvian Landscape Painting 2019. The exhibition also features works made by potters in Latgale’s Rezekne Region. The tickets price range EUR 1.00-3.00.

The Riga Street Food Festival, together with the best chefs of Riga, will take to the streets of the Latvian capital for the third time. As the temperatures become colder, the chefs will help warm up visitors with creative and unusual Latvian tastes. Tastes which are bolder than the ones on restaurant menus, just like Latvian winters – unpredictable. The Riga Street Food Festival was also named the third best event in the world at the Best Event Awards World awards ceremony in 2018. The jury was impressed with the uniqueness of the event, which featured an almost unbelievable balance of restaurant quality and creativeness with reasonable prices. Meanwhile, the Riga Street Food Festival certainly helps put Latvia as a hot destination on the global culinary map. Opening hours are from 12:00 to 20:00, and the entrance is free.

Since 2006, the Riga Porcelain Museum has been organizing the annual International Small Form Porcelain Exhibition, gathering artists from all over the world. The aim of the exhibition is to show the newest art pieces by Latvian and foreign artists which are at least 70% porcelain and do not exceed 15x15x15 cm in their dimensions. The diversity of the artists and the art pieces allow to demonstrate a mini cross-section of contemporary ceramics trends, as all of the pieces of art on display have been created within the past two years, and frequently especially for this exhibition. The tickets price range EUR 1.00-2.50. Learn more at www.porcelanamuzejs.riga.lv

During winter evenings, Dzintari Forest Park transforms into a true fairy tale, with light decorations lit from thousands of lamps: a milky way with stars, bridges and arcs, baby animals, elves, and many other light objects. Every Saturday in December, from 4:00 p.m. to 9:00 p.m., creative workshops are up and running, as well as musical performances and fun and games for the whole family. The entrance is free.

Open till January 07, Christmas in Vilnius, various venues in Vilnius

This Christmas in Vilnius is the largest and most impressive festival in Lithuania’s capital. It consists of five unforgettable weeks of winter holidays in the city, where the variety of festivities and pleasant Christmas surprises make Vilnius the true Christmas capital. The Christmas towns at Cathedral and Vilnius Town Hall squares create a special festive mood in the heart of Vilnius Old Town and offer a show of remarkable Christmas beauties and goodies. A special holiday tradition in the Lithuanian capital has become the Vilnius Christmas Train, which turns festive circles around the center of Vilnius. Another one is the annual 3D projection of a Christmas Fairy Tale, which is displayed in all its vivid colors on the main outer wall of Vilnius Cathedral every evening from 25 to 29 December. On New Year’s Eve, the Cathedral Square fills with residents of Vilnius and guests of the city who welcome the New Year with colorful festive fireworks. On 6 January, the end of Christmas in Vilnius is announced with the traditional playful Three Kings Procession. Christmas in Vilnius pleasantly surprises residents of Vilnius and guests of the city with new ideas and special celebrations every year. Come be a part of Christmas in Vilnius! Full information on the festival is available at kaledossostineje.lt

For the sixteenth time, the festival of Orthodox Christmas in Lithuania will bring joy to the residents and guests of the Lithuanian capital. The Slavic School of Traditional Music is the initiator and main organizer of the festival. As every year, the festival will be attended by the most famous artists from Lithuania and other countries. The festival is open to music of all traditions and geographies and attracts everyone’s attention with intriguing projects. The festival’s program can be found at www.vilnius-events.lt and tickets can be purchased online at www.tiketa.lt and www.bilietai.lt

From 11-19th January 2020 the Arts Printing House will become the biggest playground in Vilnius – festival for children KITOKS will take over the venue. More information on the festival is available at www.menuspaustuve.lt

Vilnius International Short Film Festival is one of the biggest short film festivals in Baltic countries, presenting the newest and best short films from all around the world. In thirteen years, the Festival became a unique platform in Lithuania, screening not only European but Worldwide professional short films presented by the upcoming generation of talented filmmakers. For more information please visit www.filmshorts.lt

Light installations in Old Vilnius, on its streets, in public gardens will inspire the city and its citizens for a new life, warm the cold Middle Ages, paint the city’s architecture, pull the townspeople out of their houses into the streets; foreign guests will be attracted to our capital city. Bridges and temples, squares and sculptures – the light will play with them, as well as with the audience. The entrance is free. More information on the festival is available at www.lightfestival.lt