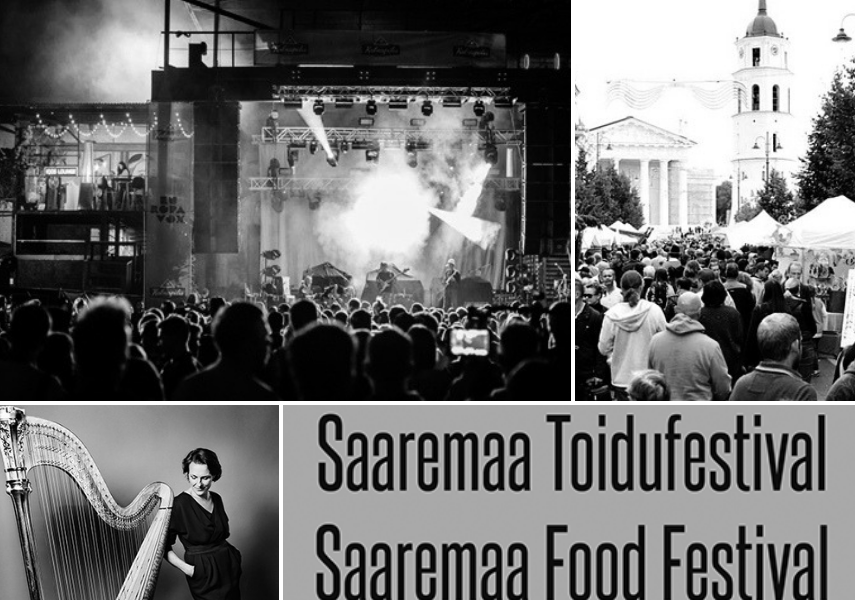 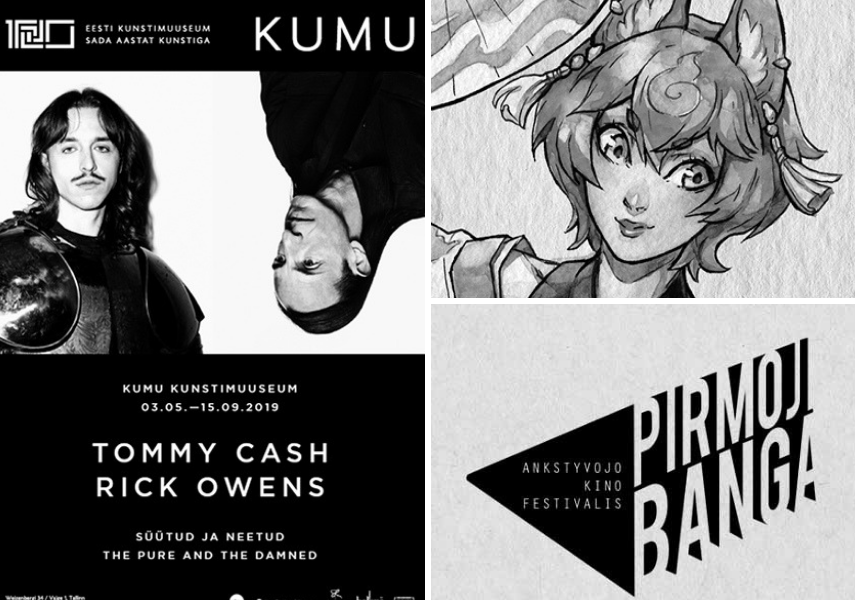 Even though summer will be over by September, Saaremaa still welcomes everyone.

Saaremaa Food Festival is an exciting 11-day programme, the motto of which is ‘a happy eater also makes happy food’. There is something for everyone in the programme: Saaremaa Restaurant Week, Cake Concert, Market Day, village centres, special dinners, Kuressaare Street Picnic, Children’s restaurant, and more. Come to the islands! The official information on the festival is available at the official web site www.saaremaatoidufestival.ee

The exhibition at the Kumu Art Museum in Tallinn displays both the individual works of Tommy Cash and Rick Owens, as well as their jointly executed artworks for the show. Although different in practice and background, Cash’s and Owens’s interests overlap considerably: Cash’s visuals feature a great deal of aestheticized uncanniness, whereas Owens’s practice carries a kindred approach to the balance between functional design and the pure manifestation of form. This exhibition aims to emphasize their artistic positions, which, although originating from different realms of culture, boldly shape the larger picture of the visual arts today. The constellation of the exhibited materials – sculptures, garments on mannequins, objects, videos and sound – progresses into a realm of its own. The exhibition, consisting of multiple zones with different atmospheres, operates as a total spatial installation, where opposite poles of the same mind are questioned. This realm of Tommy Cash and Rick Owens works as a concentrate: it’s an amplified version of usually subtle hints and whispers. For all official information please go to www.kumu.ekm.ee

Tallinn Design Festival demonstrates the achievements of designers from Estonia and other countries, and starts discussions about the role of design in modern society. The venues of the festival have often been the neglected pearls of architecture. In the collectively composed festival program, one can find formats going deeper into design world, cultural and entertaining events, and initiatives promoting design trade. Festival visitors can renew their design knowledge and experience design as a holistic discipline integrated into our everyday life with its aesthetics and human-centered processes and solutions. Please visit www.tallinndesignfestival.com for full information.

AniMatsuri is a Japanese pop-culture festival held for the 13th time and intended mainly for youngsters. Interesting lectures, exciting competitions, workshops, martial arts demonstrations and much more will take place. The main attraction is the cosplay contest taking place on the second day. The winner of one of the categories will fly to London for the European championship. In addition, many exciting events will take place during September. Extensive information on the festival can be found at www.animatsuri.eu

Everybody is welcome to the broadest Riga Food fair in Kipsala to draw inspiration from a diversity of menu ideas, to taste new products, including local craft products, as well as see competitions featuring professional chefs, pastry cooks and bartenders. On the other hand, professionals are invited to derive from ideas, knowledge and information for their further professional and business development. To learn more about the fair and ticket purchase please visit www.bt1.lv

In 1997, the internationally acclaimed violinist Gidons Kremers introduced the world the a completely new orchestra – the Kremerata Baltica chamber orchestra – made up of young musicians from Latvia, Lithuania and Estonia. The orchestra quickly captivated audiences with its unrestrained joy and exuberance and with the variety and vitality of its programming. In just a few years, this talented group of musicians has developed into one of the best chamber orchestras in the world, with an excellent reputation performing at many of the world’s most prestigious concert halls. This year the chamber orchestra returns to the Dzintari Concert Hall with its annual festival. To learn more please visit www.dzintarukoncertzale.lv and to buy tickets online please go to www.bilesuparadize.lv

Metaphorically speaking (in the Romantic languages), white nights mean “sleepless” nights, and this year, as usual in early September, you are cordially invited to join the crowd in experiencing a sleepless night chock full of surprises. The evening will be packed full of various contemporary art form – concerts, installations and performances in the urban environment, exhibitions, multimedia projects, poetry readings, film screenings etc. Participating in the organization of the night will be various art galleries, cafes, art and cultural studios, as well as other active Riga residents and like-minded individuals. This year the festival’s theme will be connected with the centenary celebrations of Latvia, Lithuania and Estonia, thus, the festival will emphasize the work of Baltic artists. The entrance is free of charge. Full program of events with detailed descriptions will be available at www.baltanakts.lv

The main focus of the summer jewelry exhibition is on colors. Color is the sum of feelings, the association abc-book. Color is organic. It makes things alive. The artist creates in his work his own color environment, which forms human thoughts and feelings in one way or another. Contemporary jewelry artists play successfully not only with materials, but also with colors, using them in their jewelry collections. The colorful jewelry wearer can be highlighted, emphasized, contrasted, relaxed and harmonized with the outfit and the surrounding environment. A colorful jewelry can be an outstanding ally in communicating with the environment and with yourself. Learn more at www.putti.lv

In their day-to-day lives Marie-Pierre Langlamet plays harp with the Berliner Philharmoniker, and Vincent Lucas is the Principal Flute of the Orchestre de Paris. The acclaimed musicians will join their talents for the opening of Sinfonietta Riga’s 14th Season to treat the audience to Mozart’s heavenly double concerto. It is well matched with Mozart’s older colleague Haydn’s Symphony No. 102 – one of his twelve London Symphonies, at times praised as Haydn’s best work of the genre. Following established tradition, the third movement of the opus is a minuet; the same dance takes a different, impressionistic character in young Claude Debussy’s “Petite Suite”. Finally, the juicy contemporary cherry on top of the musical cake will be the vibrant Musica Profana by Estonian Lepo Sumera. . To learn more please visit www.latvijaskoncerti.lv and to buy tickets online please go to www.bilesuparadize.lv

Let’s go on an unforgettable weekend trip to exotic Japan at the largest Japanese cultural festival in the Baltic region – nowJapan – held on 10-15th of September. A true Japan’s cultural beacon in Lithuania presents nowadays Japan: the fusion of vibrant pop culture, millennial traditions and innovative contemporary ideas. All official information is available at www.nowjapan.lt

The Film Festival First Wave is a satellite event of the European Film Forum “Scanorama”. It represents the cinema of the early 20th century, thus, emphasizing the importance of origins and history of the cinema. The program is structured to cover the most diversified spectrum of genres and schools of national cinema. To learn more please visit www.pirmojibanga.lt

The summer is over, but the festivals continue. Take part in the only urban music and arts festival in the Baltics. High-quality music stages, art performances, night-time movies, open-air exhibitions – be at the center of an art adventure taking place in former factories. Enjoy street food, look for something nice from the young Lithuanian designers or get some vinyl at the night market. The entrance is free. Learn more at www.menufabrikas.lt

Theater is an integral part of culture, but not everyone can afford to buy a ticket to a play. The MOSAIC project gives the opportunity to enter the world of theater to anyone at no cost whatsoever. And most importantly, it takes place at a historically remarkable and wonderful time when Lithuania celebrates its 100th anniversary. Therefore, this year, all participants will come to Lithuania for this special occasion. In the performances, fire is used as a symbol of light, a symbol of life, namely in the dark, revealing all its beauty. The International Street Theater Festival “Mosaic of a century” is the thirteenth festival organized by the Vilnius Old Town Theater – Vilniaus senamiesčio teatras. With art groups, actors and performers from the Netherlands, Hungary, Yugoslavia, Poland, France, Italy, Turkey, Latvia, Bulgaria, Russia, Belarus, Ukraine, and Estonia who took part over the years, the festival became a good tradition of the city of Vilnius. The festival is an opportunity for budding talents to gain experience and expose themselves to new ideas. It opens new roads for them, changes their understanding of Lithuania and the European Union. For more information please visit www.senamiescioteatras.lt

You will definitely smell the aromas of the fair first – various stands offering national food in the streets of Vilnius will lure you from afar. Get acquainted with national customs and traditions, from famous German sausages, pastries made by Georgians and Karaims, and other delicacies that will definitely tempt you to taste everything. But this is not just a foodie paradise; the most active masters of arts and crafts from the national communities living in Lithuania will present their arts, songs, and dances for the audience. Learn more about the event at www.tautumuge.lt

Vilnius Documentary Film Festival (VDFF) is an international documentary film festival launched in 2004 in Lithuania and is the main documentary film platform in the Baltics. The festival has continually supported the diversity of documentary films by composing rich and captivating program. Each year the main and special festival programs show the most recent internationally awarded documentaries while a retrospective is dedicated to an acknowledged filmmaker.

Nicolas Philibert, Pawel Lozinski, Sergej Dvorcevoj, Viktor Kossakovsky, Leonard Retel Helmrich are among those who honored the festival with their presence. These film professionals lead master classes designated for young documentary filmmakers. The best Baltic documentary film award is also organized during the festival. It is a platform for documentary film production from the Baltic States and is announced by an international jury. The festival has always been searching for a dialogue with its audience; therefore, various discussions are organized to bring the spectators together with the filmmakers and to raise awareness of the fascinating possibilities of documentary film genre. Learn more at www.vdff.lt

Comic Con Baltics is coming back to Lithuania for the third time! It is an annual popular culture phenomenon that is going to usurp 16 000 sq. m. of Litexpo Exhibition Centre. It is the one and only place where you can find all of what the pop culture is under one, huge rooftop. Here you can meet famous Hollywood stars, film directors, comics artists, stuntmen, crazy costume creators, mind blowing photo booths, props, newest computer games and trendy board games. The organizers of the pop-culture event Comic Con Baltics 2019 have just announced that Steven Ogg, the actor known for his unique appearance, award-winning voice and outstanding acting skills is coming to Lithuania. The Canadian-born actor is known world-wide for his roles as Trevor Phillips in the video game “Grand Theft Auto” (“GTA V”), Simon in HBO series “The Walking Dead” and Rebus in “Westworld”. For more information on the event please go to www.ccbaltics.com