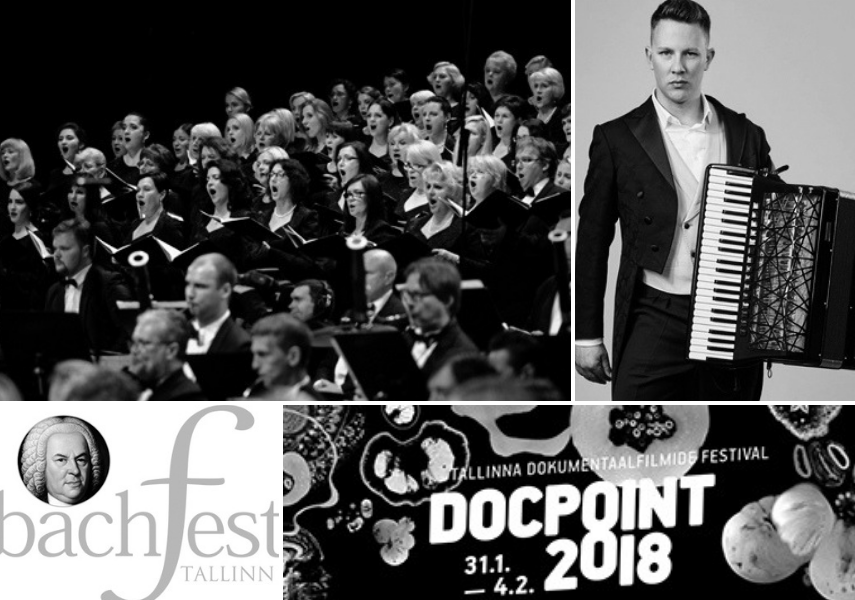 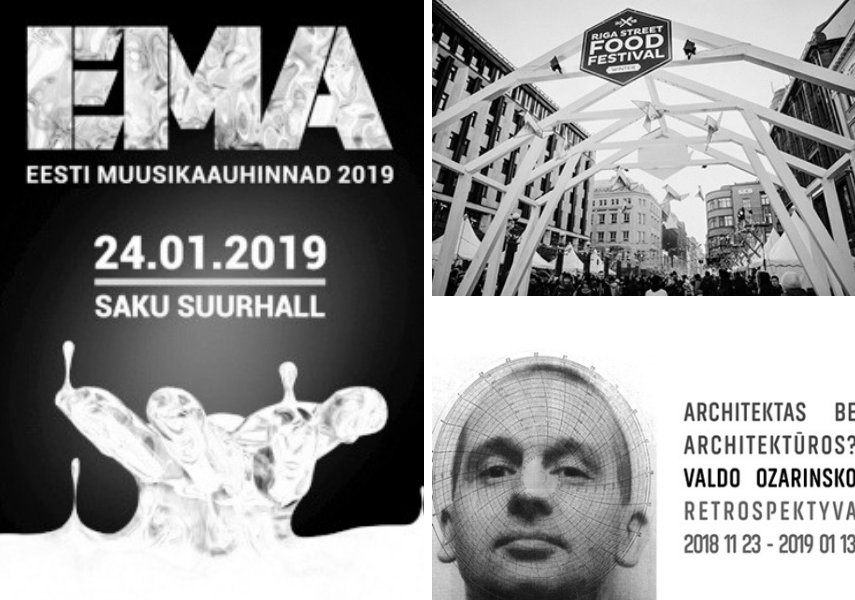 bachFest Tallinn Music Festival takes place from the 1st to 7th of January 2019. For the eighth year in a row, Tallinn will start its New Year with the marvelous sounds of music by the famous German composer Johann Sebastian Bach. The festival has become a tradition and an original, warm and beautiful New Year’s greeting from Tallinn to all inhabitants and visitors of the Estonian capital. The concert program presents organ, instrumental, orchestral, choral, vocal and Christmas cantatas – works by Johann Sebastian Bach. The festival concerts will take place in the large concert hall of the Niguliste Museum (Church of St. Nicholas) and the St. Anthony Chapel of this museum, where the most famous work of art in Tallinn has been preserved and is currently displayed – the fragment of the original wide painting of Bernt Notke’s Danse Macabre (Dance of Death). The best works of J.S. Bach, as well as the works of other great composers, will be performed by musicians from Estonia, France, Italy, Germany and Poland. Detailed information on the festival can be found at www.arsmusica.ee/en/bachfest

SchoolJazz is a three-day camp and festival for young musicians at which they can take part in workshops and discussions, enjoy concerts and finally take to the stage themselves. For more info please visit the event’s Facebook page.

Orthodox Singers invite all their fans to a traditional Christmas concert at the Tallinn St. Mary’s Cathedral on Friday, 4 January at 7 p.m. The concert performances will include both old and modern orthodox Christmas songs and masterpieces of the world’s ecclesiastical music. The program is full of beautiful Christmas songs. The group will perform Old Russian, Serbian and Greek music, and a Syrian Christmas song will be performed in Aramaic – the language of the era of Christ. In addition to Valeri Petrov’s ecclesiastical compositions, we can also enjoy Christmas songs by Valeri Kalistratov, Mihhail Lagunov, John Tavener and Galina Grigorjeva. The vocal ensemble Orthodox Singers is known as the introducer of Orthodox Church music and as a promoter both in Estonia and abroad. Its manner of performance is characterized by profound attention to every word in the sacred text, flawless vocal production, a carefully thought-out dynamic plan, and an extraordinary sense of style. Critics have repeatedly praised their almost super-natural skill of retaining the composition's uniformity of form in their performances, all the while achieving an exquisite dynamic piano described best with the saying of ‘sound melting’. The ensemble consists of professional musicians and is especially focused on early Orthodox songs, which are rarely heard in concert performances.

GARBA6E473 (artists Sidney Lepp and Kertu Rannula) have opened their exhibition ‘U R Part of It’ in the Showcase Gallery of the department of photography at the Estonian Academy of Arts, and it will remain open until January 27, 2019. The artists present a collage that is referring to the new national tradition of Estonians to go to Latvia for purchasing large amounts of cheaper alcohol. The exposition focuses on a group of young Estonian artists consuming alcohol and killing time in Riga. Learn more at the exhibition’s Facebook page.

Launched nine years ago by a group of enterprising Finnish filmmakers in Helsinki, the DocPoint documentary festival has since gone on to become a prestigious event throughout Europe. To find out more about the festival’s program please go to the official page www.docpoint.ee/en/

Riga Craft Beer Weekend is the largest craft beer event of its type in Northern Europe, bringing together dozens of craft brewers from all over the world and offering over 480 different types of beer. On 4 January at 7:00 p.m., the German synth-pop band De/Vision will take the stage. If you like Depeche Mode, you will certainly also like De/Vision. To buy tickets online please go to www.bezrindas.lv

The concert program performed by Latvian National Opera and Ballet soloists Ilona Bagele and Samsons Izjumovs will feature popular Russian romance songs composed in the 19th and 20th centuries. For full information on the concert and to buy tickets please go to www.bilesuparadize.lv

During Orthodox Christmas, the Latvian Radio Choir invites all to attend its concert featuring Russian sacred choir music from the 18th century to today. Conductor – Sigvards Klava. Program: P. Tchaikovsky’s Liturgy of St. John Chrysostom and spiritual chants. For full information on the concert and to buy tickets please go to www.bilesuparadize.lv

Raimonds Pauls – accomplished pianist, jazz musician and composer – has been a symbol and legend of Latvia for a long time. He is famous for being not only a highly gifted composer, frequently compared to his own favorite composer, George Gershwin, but also for being a man who discovers ‘stars’ –  thanks to him many talented singers have become stars in their own right, with many of them performing on this evening. Performing songs by Raimonds Pauls will be the Latvian Radio Big Band, Kristine Prauliņa (vocals), Radio Trio and the vocal group Framest. The concert’s program and tickets are available at www.bilesuparadize.lv

For the third year in a row, Riga’s top chefs will gather outside of their comfort zone in the cold of winter to prepare their versions of Latvian street food. Continuing their search for the true Latvian taste, the chefs will offer visitors a variety of culinary surprises at an acceptable price for all. The entrance is free.

Aldis Klavins has been nominated the best Latvian landscapist in the 2017 competition Jazeps Pigoznis Award in Latvian Landscape Painting that entitled him to organize his solo exhibition at St. Peter’s Church. Aldis Klavins (1938) has been working in the Liepaja Secondary School of Applied Art for many years, has been the chief artist at Liepaja Theater, and is a professor in visual arts at Liepaja University. The artist takes active part in exhibitions and plein-airs, and is frequently organizing solo exhibitions.

This concert will be the first meeting of Sinfonietta Riga and erudite Estonian conductor Olari Elts who has curated this contemporary composer’s conversation with Wolfgang Amadeus. Hungarian Peter Eötvös’ offers a modern and sophisticated play with thematic sketches by Mozart that creates a captivating, unpredictable dialogue between the past and the present. With a Mozartian ease Valentin Silvestrov is able to reveal what cannot be expressed in any other way and speaks to us in a musical language from the past, conjuring poignant echoes and ghost-like apparitions from far away. The messenger in his composition’s title refers to a literary character in existentialist philosopher Yakov Druskin’s works, symbolizing the link between our world and the after-world. Along with these contemporary revelries – a piano concerto and the magnificent Symphony No. 40 by the Viennese genius himself. Full information on the concert is available at www.latvijaskoncerti.lv and tickets can be bought at www.bilesuparadize.lv

The Estonian artist Eduard Zentsik is a multi-talented artist who works in the fields of painting, photography, graphics, installations and performance. His latest exhibition Soul will feature his newest paintings. The artist tells about his works: “The soul is the most important, the essence of everything, which travels through the world of everlasting love. This exhibition, in a symbolic way, touches and gives direction to those trying to find the hidden meaning. The viewer is given the opportunity to open a window to an unknown world created by the artist’s soul. The viewer has the freedom to interpret and comprehend however he or she likes. Souls are united by love – how diverse is it?” The entrance to the exhibition is free of charge.

His passion for the accordion and the musical atmosphere created are limitless – it spreads around the world and makes its way into the hearts of people. This time, Martynas Levickis, with the Vilnius Mikroorkéstra band invite listeners to cozy concerts in a chamber atmosphere. The new program Concerto Classico will feature exceptional Renaissance, Baroque and Romanticism era works. Tickets can be purchased online at www.bilietai.lt

Tres Dei Matris Symphoniae (Three Symphonies of Mother of God) was commissioned by the Brandenburg State Orchestra (das Brandenburgische Staatsorchester Frankfurt) and composed in 2002–2003. Three large-scale movements – Angelus Domini (symphonia prima), Bethleem (symphonia secunda) and Mater Dolorosa (symphonia tertia) – embrace three decisive episodes of the New Testament involving Christ and Mary – the Revelation, the Birth of Jesus and the Crucifixion. This triptych is framed with a short introduction (Introitus), which uses fragments of the Song of Songs, and a closing prayer (Oratio) on a text by Hildegard von Bingen. Traditional texts of Ave Maria, Gloria and Stabat Mater were used as a basis for the main movements of the work. All texts are in Latin. This is not an oratorio in the conventional sense, but rather a symphony or three symphonies, where a choir, even though entrusted with a very important role, is only one of many voices. Often distanced from directly articulated canonical text, related or rather enacted by the instruments, the story becomes more personal and intimate, while at the same time more generalized. Indeed, it was a personal consideration, not a ritualistic reiteration of well-known truths, which induced the composer to approach the issues contemplated upon for centuries. To learn more and to buy tickets please go to www.opera.lt

Valdas Ozarinskas (1961–2014) was an architect and artist, and one of the most remarkable representatives of interdisciplinary art and conceptual architecture in Lithuania. Over the course of three decades, Ozarinskas was prolific and multifarious in his work; he designed exhibitions, interiors, private houses and public commissions, theatre and event productions, produced fashion collections, art installations and videos, edited publications, curated exhibitions of work by the Private Ideology group and organized music and art events. “An Architect without Architecture?” provides an overview of nearly three decades of this extraordinary artist and architect’s work. It is the first opportunity to see his relatively recent work alongside some of his early projects, and a rare occasion to draw analogies between his works across various fields. For more information please go to www.cac.lt

The festival Winter Screens starting on 24 January 2019 is the fourteenth film festival organized by the French Institute in Lithuania. The event, which will take place in eleven cities throughout Lithuania, will again introduce the audience to the French film genre – engaging, cheeky, light and hard at the same time, extraordinary and unusual. This is a subtle art nurturing an active and intellectual spectator, and at the same time – a sensitive and open dreamer in search of new emotions and excitement. The festival Winter Screens is rich in coincidences and everyday curiosities, indescribable sadness and crazy laughter. Leave the cinema changed – inspired and enriched. Celebrate cinema this winter! For official information on the festival please visit www.ziemosekranai.lt