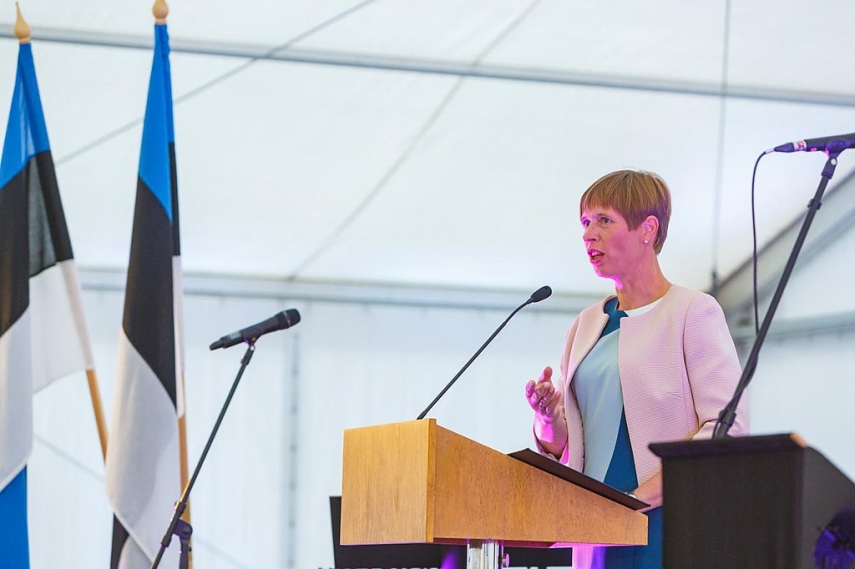 TALLINN - Estonian President Kersti Kaljulaid in a speech made at the opening sitting of the eighth session of the 13th Riigikogu invited MPs to seek possibilities for strengthening the welfare state.

"Dear Riigikogu, I wish you strength and understanding to discuss whether our secure foundation and bearing walls could already handle the kind of superstructure that economically successful countries similar to us can afford to have -- the kind that we all know in the broader sense as a welfare state, a caring state," Kaljulaid said.

The president referred to the fact that Estonia's gross domestic product (GDP) has reached the level it was at in Finland in 1994. "How we then marveled at the possibilities there for creating an environment that cares about its people!" Kaljulaid said.

"It is time to pluck the fruit of the work done by you and the all people of Estonia. For the benefit of all people of Estonia. It would be unseemly now that our opportunities actually do not differ much from the European average -- 75 percent is still lacking by a quarter but nevertheless a magnitude similar to the European average -- to start sharing the fruit from our tree grown jointly, patiently and often in deprivation in a less solidary manner than before," the head of state said.

"Competition belongs to the field of economy and economy should continue to be as free as possible in Estonia, not restrained by unnecessary restrictions. But the benefits maintaining and carrying forward the society -- the distribution of them must be solidary," Kaljulaid emphasized.

"Education, healthcare, social support, protection from violence and aid in the event of accidents -- all this must be accessible regardless of address or salary figures," the president said. Only by fulfilling these conditions can tensions inevitably arising from wealth stratification be tamed in the society, the head of state said. "This kind of comfort -- at least our kids go to an equally good school and will go to an excellent university, at least our heart surgeries will be carried out by the same good surgeon, at least the police and ambulance will arrive to me as quickly as to my rich neighbor," Kaljulaid said.

"Inequality and economic stratification are as natural a sight in the free society as the jealousy when seeing one's neighbor's big new car or awesome lawnmower. But in a welfare state that unavoidably gives people the necessary to at least maintain the hope for a better future, at least for the children if not for yourself, jealousy is a progressive rather than a destructive power," the president said.

"Hope will disappear, people will take offense and develop bitterness toward their state. Each decision of the state will then seem as a personal insult and politicians will not actually understand why it is now exactly that the taxes are going to Latvia or will simply be not paid because the Tax Board is not able to look inside an envelope. The matter does not necessarily lie in practical personal damage, but simply in being offended by one's state, which in turn generates alienation. And alienation in turn will create anger and wickedness, not caring and noticing," the president said.

The eighth session of the 13th Riigikogu will last from September 10 until December 20. This is the final fall session of this composition of the parliament.