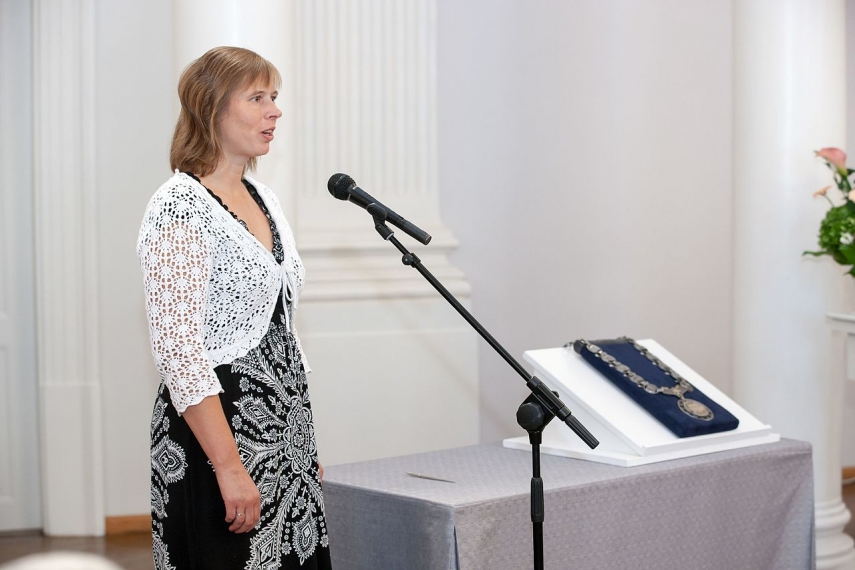 TALLINN - President Kersti Kaljulaid emphasized in her Independence Day speech that Estonia will never stand alone again as our partners and allies are with us unconditionally, respecting our language and our culture, our traditions and wishes, but she noted at the same time that new decisions are needed for further development.

"In today's world such allies are extremely important. The world may not be totally out of joint, but we see that things which have been self-evident for decades may no longer be absolute. This world requires countries like Estonia be especially vigilant. It requires the resolute observation of the values that form the basis of society, and especially international law. It requires that we act responsibly on the international stage and in its corridors. I stress this today when, in only 127 days and a little more than seven hours, Estonia will assume the presidency of the Council of the European Union," the president said.

According to the head of state, Estonia's foreign and security policy has been successful during the last quarter century. "Our politicians have accepted international responsibilities and fulfilled them, sometimes at the cost of domestic popularity. Today we see how important this has been. We are being assured that, in turbulent times, we will not be abandoned," she observed, thanking all governments of Estonia for having made the right decisions.

"In 25 years, we have created our dream Estonia," she continued. "But this will not suffice for the future. We must now create our children's and grandchildren's dream Estonia. Our country is very different from others, clearly more creative and flexible. I see many opportunities for progress based on what has already been achieved."

The independent state of Estonia can only exist permanently in a space of democratic values. A small state cannot function in a geopolitically tense place such as ours if it is internally undemocratic, the president observed.

An important part of democratic values is human rights, which all people are entitled to simply because they are born human, Kaljulaid said. "In addition, there are the values that have been agreed upon in our Constitution, in order to preserve the Estonian language and culture, because otherwise, there would be no point to an independent Republic of Estonia. Language and the arts create the cultural space. By adding customs and traditions, we get a behavioral space that is inherent to us. We get a cohesive environment, and we have the right to demand that anyone who comes here for a longer period, or for good, recognizes this. Anyone who appreciates our language, customs and values can be an Estonian. Thus, they, as well as we, can consider them Estonian," she said.

In her words, it is possible to write laws about how to become an Estonian citizen but not on how to become a part of the Estonian nation. "If we would attempt that, we would turn into a totalitarian society and destroy our freedoms in the name of preserving our conduct. We cannot prohibit everything that we don't wish to see in our behavioral space; because, in the end, we would also destroy our own freedom. We cannot make Estonians of everyone who wants to live here. This should not be our goal. In this way we would destroy our Estonian nature," she said.

According to Kaljulaid, she understands that most Estonians want to hold onto their behavioral space more jealously than many West European countries. "The majority of us are not ready to live in a multicultural society where Estonian conduct would not be more important than others. The countries which we believe are losing their identity to newcomers have been more successful than we have been in creating a uniform linguistic space, even when they have been less committed to protecting their behavioral space. Integration into the linguistic environment starts in kindergarten and pre-school, through natural communications between adults and children, not through language instruction.

"The customs of the other ethnic groups who live here do not differ very much from ours. There are peoples in the world whose understanding of society is radically different than ours. This does not mean that there is no place for them in Estonia, be they war refugees or labor migrants. However, we must be able to formulate what we expect of them in order to function together in Estonian society," the president stated.

In her words, the preservation of the behavioral space cannot be limited to teaching people the language as well as respect for the freedoms of our society, and not to restrict these freedoms at one's own initiative. "This is simply the precondition, the minimum. Our behavioral space is ensured by our constant readiness to remember the values that are important to us. A role in the protection of our behavioral space must also be played by the respect we show to the customs of others, but only if they do not start to infringe on our behavioral space.

"Describing the behavioral space is complicated; after all, we are not homogeneous robots attending to Estonian affairs. We also have different habits, different expectations of life, and different worldviews. But since we are apparently not ready for a multicultural society, we must be able to formulate our own society, Estonia's society. We must be able to describe it as well as consistently and deftly teach it," the head of state said.