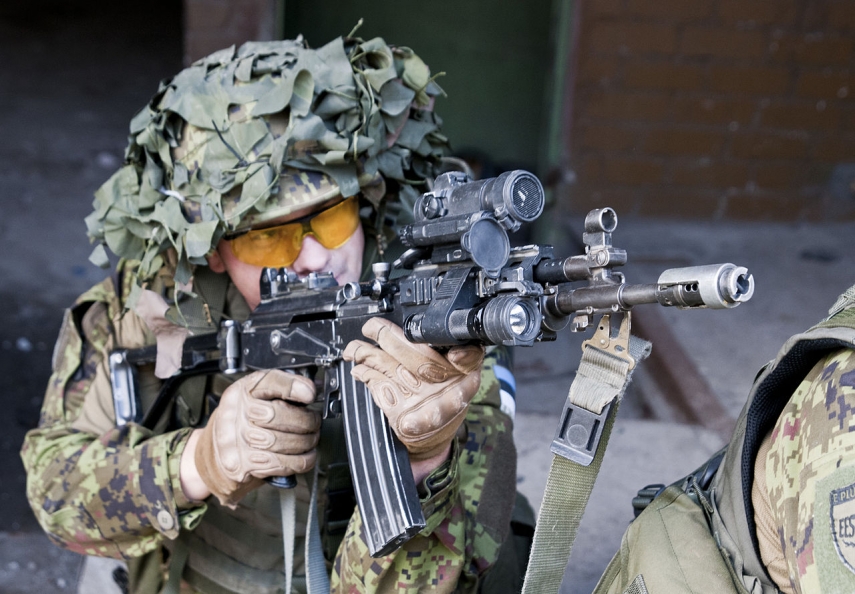 TALLINN – The Estonian public procurement dispute settlement committee has satisfied a request by Sig Sauer challenging the selection of a tender offer by Lewis Machine & Tool Company (LMT) as successful in a tender for the acquisition of automatic rifles for the armed structures of Estonia.

The director of the Estonian Center For Defense Investment, Col. Rauno Sirk, at the beginning of December declared the offer by  LMT as the most successful in the tender at the proposal of the tender committee.

Sig Sauer Inc., a US company grown out of the Swiss arms manufacturer Sig Sauer, challenged the outcome of the selection process as according to them the final phase of the selection -- the verification of the most successful tenderer -- was carried out partially unlawfully. Specifically, Sig Sauer finds that LMT was allowed unacceptable concessions compared with the terms of the tender.

It appears from the decision of the public procurement dispute settlement committee that in the so-called rough handling test the weapon must not have sustained structural or functional damage when dropped onto concrete from a height of 1.5 meters.

"Based on the procurement documents, rifle butt is a part of the weapon, and each weapon must be also equipped with a red dot sight. Thus there is no reason whatsoever to consider that a butt and a red dot sight did not have to be on the weapon during said test," the dispute settlement committee said.

In the documents concerning the conduct of the test there is no information on whether rifle butt and a red dot sight were attached to the weapon during the test and what damage or impairment these components sustained during the testing of the weapon.

This means that even though no damage may have been sustained by the weapon itself, it was not possible for the dispute settlement committee to establish the final verification of the tender offer filed by LMT because the verdict and its appendixes do not contain clarifications by the Center for Defense Investment.

In addition, it is not possible to ascertain as a result of insufficient records whether the weapons were tested with the Magpul and Blackhawk straps shown in the offer of LMT.

Sig Sauer suspected that the straps used in the test were a product of Blueforce, which the dispute settlement committee denied, however.

The spokesperson for the Center for Defense Investment, Ingrid Muhling, told BNS that the center will examine the decision of the procurement dispute settlement committee and will decide this week how to proceed with the tender.

"Although most of the claims made to the dispute settlement committee were not proven and the procurement has not been canceled, it is too early to say what the next steps will be in said matter. We will analyze the situation once again in the coming few days in order for there to be no legal of substantive ambiguities in the decisions," Muhling said.

"At this point we can say that the products offered by Lewis Machine & Tool Company meet the requirements of the Estonian defense forces, which is demonstrated clearly also in the decision of the dispute settlement committee. Lewis Machine & Tool Company will examine the reasoning of the decision of the dispute settlement committee and decide about further steps within the period set out  for challenging the decision," representative of the company Ingvar Parnamae told BNS.

"Considering the importance of the procurement for Estonia's defense capability, contestations are natural in the case of such large-scale procurements," he added.

Lewis Machine & Tool Company can contest the decision of the dispute settlement committee in an administrative court within 14 days.

The offer of LMT achieved 99.3 points in the appraisal and was the most favorable when it comes to the price, life cycle support and guaranteed number of shots alike. A test shooting of the weapons organized by the defense forces demonstrated that the accuracy and precision of all the weapons met the requirements set out in the terms of the tender and there were no significant differences between them.

In the appraisal of the offers, the outcome of a shooting test conducted in March made up 10 percent of the overall score, the guaranteed number of shots throughout the weapon's life cycle 20 percent, length of the useful life of the weapon 30 percent, and the price 40 percent.

The tender of the Center for Defense Investment to buy new 5.56-millimeter and 7.62-millimeter automatic firearms for the 1st and 2nd Infantry Brigades and eventually for the entire operations structure of the defense forces in 2019-2021 was announced in June 2017. The total number of automatic firearms to be acquired is 16,000 and the estimated value of he procurement is 22 million euros.

Sig Sauer was one of the three companies the offers of which were deemed as having met the minimum requirements. The other company was German arms producer Heckler & Koch and the winning offer was made by US manufacturer Lewis Machine & Tool Company.