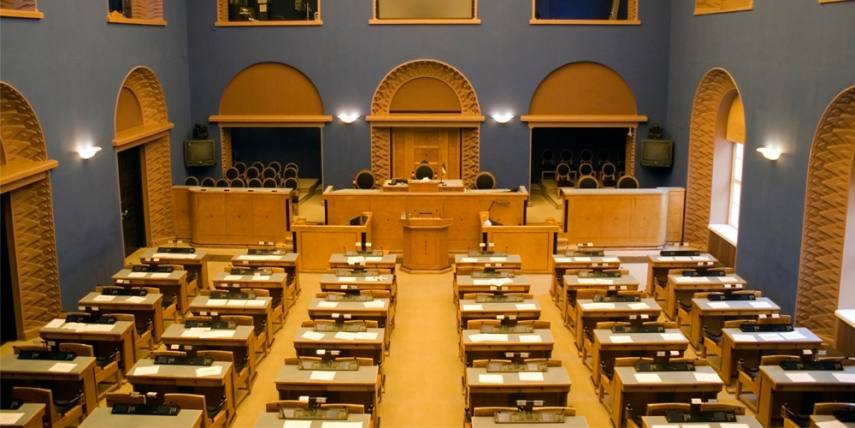 The Hall of the Riigikogu [Rastrojo]

TALLINN - Leaders of Estonian parliament's party groups this afternoon once more asserted their support of the presidential candidacy of Kersti Kaljulaid, with only the Conservative People's Party (EKRE) group expressing considerable differences in opinion with Kaljulaid concerning some issues.

Chairman of the Pro Patria and Res Publica Union (IRL) group Priit Sibul disclosed that on Tuesday the party was already prepared to establish Kaljulaid’s candidacy and on Wednesday following their meeting with her their feelings remained unchanged.

Head of the Centre Party group Kadri Simson said that their party group had not made a binding decision and each party member would decide whether or not to back Kaljulaid. However, she  noted that most members of the group support the candidacy. "We understand that a compromise is a situation where it is not possible to focus on one's candidate," Simson explained, adding that Kaljulaid seemed likeable.

According to Andres Herkel, chairman of the Free Party, his party had already announced their support to Kaljulaid yesterday. "Today it was solidified even more. Answers to a wide spectrum of questions were good, exhaustive, and erudite," Herkel remarked, adding that Estonia is going to have a very good president.

The head of the Reform Party group Urve Tiidus verified his party's hope to elect a head of state on Oct. 3. "We are ready to unanimously support the candidacy of Kaljulaid. This morning's meeting was very necessary for us. There were a lot of questions, and answers were informative and good," Tiidus said.

Andres Anvelt, the head of the Social Democratic Party's (SDE) parliamentary group, stated that the party group had no need to deliberate on the matter as all members already backed Kaljulaid. Anvelt stressed that “it is great to see that we are moving toward a consensual candidate and exiting the political dead end.”

According to the leader of the EKRE group, Martin Helme, the meeting with Kaljulaid was pleasant and constructive. "Today we asked a bunch of questions, answers to some of which were very nice, but there are some issues concerning worldviews which form a wide gap between EKRE and the candidate," Helme said.

Due to their differences in opinion, he emphasised that he cannot predict whether EKRE's members would be among the MPs setting up Kaljulaid's candidacy, although by no means would EKRE block the election. "We need time to think if we will give our votes to Kaljulaid on Monday," Helme said.

Chairman of the Riigikogu Eiki Nestor said that Kaljulaid undoubtedly has the required 68 votes from the 101-member parliament, but it will be apparent on Thursday or Friday exactly how high the number is.

The nomination of candidates for the first round of an extraordinary vote on the new president of Estonia in the Riigikogu will start at 9 a.m. Thursday and end at 6 p.m. on Saturday.

The procedural rules are identical to the voting rounds which were held in August: the right to nominate a candidate rests with no less than one-fifth of the membership of the Riigikogu, or 21 MPs, and a member of the Riigikogu may nominate only one candidate, spokespeople for the National Electoral Committee said.

The Electoral Committee will convene on Sunday to register the candidates.

The first round of voting on the president in the Riigikogu will start at 1 p.m. on Monday, Oct. 3.