Effects of the geopolitical crisis on the Latvian economy are limited 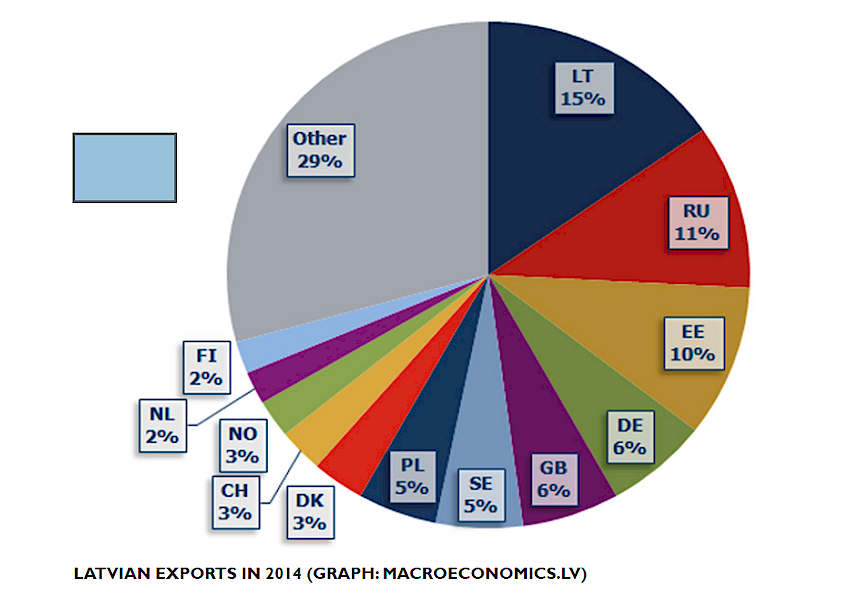 RIGA - The effect of the geopolitical crisis between Russia and Ukraine on Latvia has so far been less sizeable than initially feared. Although last year Russia’s importance in exports and imports declined slightly, taking into account international trade in both goods and services, Russia is still Latvia’s second largest trading partner. It is the economic weakness of Russia rather than the imposed sanctions that act as a bigger drag on the Latvian economy.

Overall in 2013 the exports of products under embargo to Russia amounted to 4.5% of total goods exports to Russia and only 0.5% of the total goods exports. The largest negative impact of the Russian sanctions is arguably on dairy farmers. Partly due to the embargo and partly due to global dairy price developments, farmers are facing significantly lower milk prices, i.e. a 22% fall in the average purchase price of milk since August. Manufacturing of food is also affected, especially the manufacturing of dairy products. After reaching a post-crisis high in February 2014, the output of dairy products has been on a declining trend. Since dairy production constitutes a quarter of the food processing industry, the overall food production index was downward-sloping in 2014. However, several of the businesses in the sector have been successful in conquering new markets, e.g. China and CIS countries (except Russia). The latest data for January are positive and signal a month-on-month increase in the output of dairy products as well as in overall food manufacturing.

The Russian economy has been weak since the beginning of last year, and this weakness has been felt by Latvian enterprises beyond those linked to the food industry. The fall of the ruble and the drop in the purchasing power of consumers in Russia have had an significant impact on the performance of certain companies. Sub-branches of manufacturing, such as textiles and apparel, and a number of enterprises in the machinery and equipment, other transport equipment and electrical equipment sub-branches are closely linked to the Russian market, and these saw negative developments last year.

Since the food products under embargo were mostly transported by road, businesses in this sector have also suffered due to a lost market, fiercer competition and decreased road freight rates. At the same time, a relatively small proportion of the total number of trucks (approximately 10%) were used in the export of perishable food products to Russia, and many of them have reportedly been able to find alternative markets. Data suggests that, overall, last year was a good one for the sector: road freight turnover increased by 6.7%.

The transport sector is of great importance to the Latvian economy (11% of GDP). Except from freight transported by road, it is highly dependent on Russia: in 2013, 77% of import and transit cargoes by rail came from Russia. Despite several warnings from Russia about it potentially leaving the Latvian transport corridor and switching to their own Baltic Sea ports, the transport sector performed well in 2014 (its value added increased by 3.2%). Latvian ports, especially the port of Riga, have been successful in attracting new business, but it would be impossible to fully replace the Russian market.

Latvia’s dependence on Russian gas is an important risk: potential disruptions of gas deliveries from Russia would have a very significant negative impact on the economic activity in Latvia. A positive development in this area is the recent completion of the liquefied natural gas terminal in Lithuania, which is a major step towards ensuring energy security for the Baltic States.

Finally, investment has suffered due to the geopolitical uncertainty. Last year gross fixed capital formation increased by 1.6%, but the growth mostly resulted from a better first half of the year: investment declined in the third and stayed unchanged in the final quarter of 2014. Despite the feeble investor confidence, the inflow of FDI continued, albeit at a weaker pace than in the previous years (1.5% of GDP in 2014). Furthermore, the ongoing Russia/Ukraine crisis notwithstanding, several rating agencies upgraded Latvia’s credit rating which is a positive sign for future investment prospects.

Despite the weakness in foreign demand, Latvian real exports increased by 1.9% in 2014. Latvian entrepreneurs have achieved the rise in their export market shares by diversifying markets as well as creating new products. Numerous initiatives both at national and international level have been set up in order to help the farmers and enterprises suffering from the sanctions. Although the macroeconomic impact on the Latvian economy seems to be limited so far, risks remain.

The writer is an economist at the Latvian Central Bank.
An original version of this article appeared in Latvijas Banka Monthly Newsletter, In Focus, March