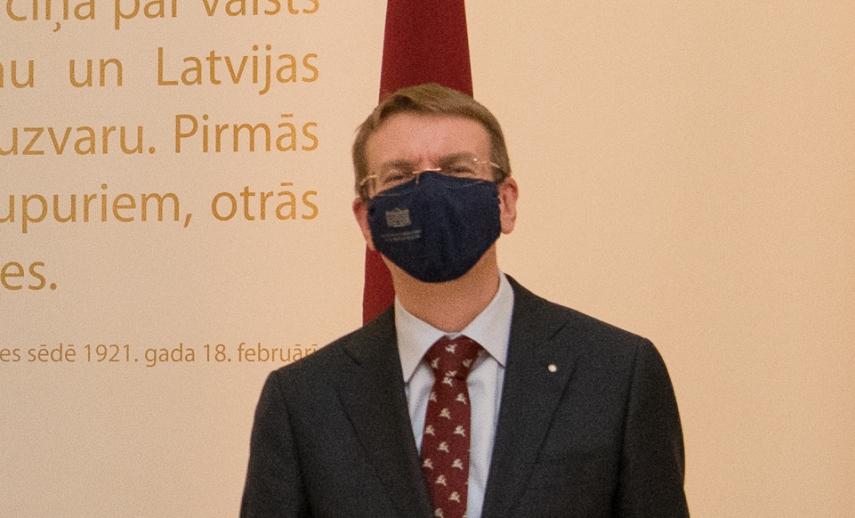 RIGA - The Baltic States and the United Kingdom are like-minded countries joined by the values and interests they share on so many aspects of the international agenda. In a meeting held on 10 March 2021 in Tallinn, the Foreign Ministers of the Baltic States and the United Kingdom agreed to continue their close coordination and cooperation on foreign policy matters including at the regular meetings of foreign ministers in the “3+1” format, LETA was informed by the Foreign Ministry.

The Ministers discussed current foreign policy and regional security issues: security policy in the region, cooperation in NATO, the state of affairs in the Eastern Partnership countries, latest developments in relations with Russia and China, and working together on climate policy, combatting disinformation, and strengthening media freedom.

In an exchange of views on relations with Russia, Latvian Foreign Minister Edgars Rinkevics noted that differences in foreign policy goals and objectives between Western states and Russia is only increasing. It has been observed for quite some time that Russia has opted to progressively disconnect itself from Europe and lacks any interest in the improvement of relations. He called for coordinating a concerted response from the Western countries including through the use of mechanisms of international organizations to hold Russia accountable for violations of its commitments and obligations in the field of human rights.

As Rinkevics pointed out, the COVID-19 pandemic has proven that democratic societies are not resilient enough against disinformation. Disinformation operations present a challenge to which transatlantic allies should seek joint answers. In this respect the Latvian Foreign Minister welcomed support from the United Kingdom for the initiative advanced by Latvia at the United Nations on the “infodemic” in the context of fighting COVID-19. Latvia also appreciates close cooperation with partners to promote responsible state behavior in cyberspace. Such cooperation should be actively pursued to deter authoritarian regimes from undermining democratic values and institutions, Rinkevics underlined.

In a discussion on China, the Latvian Foreign Minister noted the importance of unity and a principles-based position among like-minded countries on matters of values, economic cooperation and security. Latvia believes that a more active coordination is needed with the new United States administration on issues related to China.

In the context of security matters, the Latvian Foreign Minister expressed the view that NATO should retain its focus on collective defense and deterrence. Latvia highly appreciates the strong support received from the UK for the strengthening of security of the Baltic States and Europe as a whole in its capacity as a framework nation for the NATO enhanced Forward Presence battle group in Estonia and through its regular participation in the Baltic Air Policing mission.

During the visit to Estonia, Rinkevics also had a bilateral meeting with the Secretary of State for Foreign, Commonwealth and Development Affairs of the United Kingdom, Dominic Raab, to talk about the main areas of cooperation between the two countries. Rinkevics noted that Latvia and the UK have excellent bilateral relations. He pointed out to the need for further strengthening of bilateral contacts and cooperation in regional and multilateral formats. Security remains one of the priorities in cooperation with the UK, the Latvian Foreign Minister said.

The Latvian Foreign Minister warmly thanked the United Kingdom for close cooperation with Latvia in strengthening the media and in the fight against disinformation. The ministers also discussed joint activities of both countries in combating economic crime.