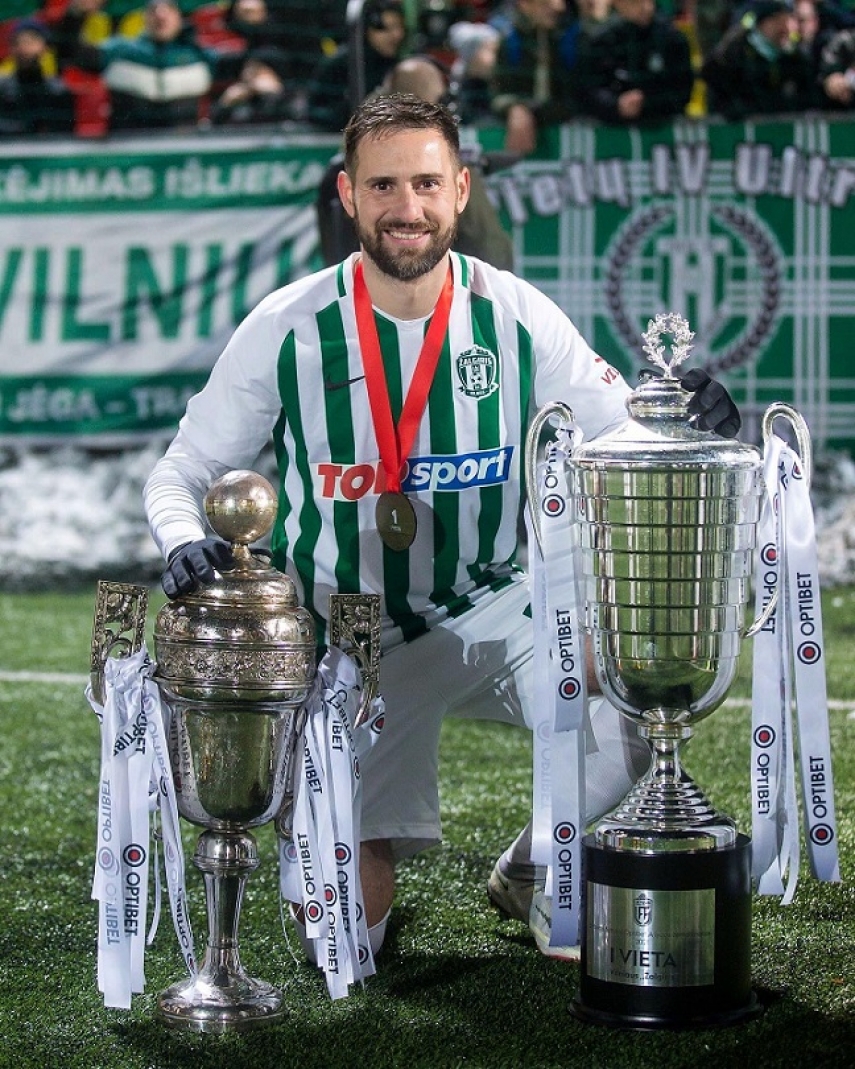 With three Lithuanian A Lyga titles, two Lithuanian Cups and one Lithuanian Super Cup, Croatian born Josip Tadic is well on his way to being one of the most decorated players in the Lithuanian game. Following his recent title success, Josip talked to The Baltic Times Magazine about his experiences in Lithuania so far and his observations for the future of Lithuanian football.

Firstly, I must begin by congratulating you for yet another successful season in Lithuania, becoming an A Lyga champion once again, this time with Futbolo klubas Zalgiris. How does it feel? Do you have a message for the supporters?

Thank you very much! It feels extremely satisfying to become an A Lyga champion yet again, as I only joined FK Zalgiris last season from FK Suduva Marijampole. We also lifted the 2021 edition of the Lithuanian Cup as well. As a player, you continuously work hard throughout the season in order to lift such cups. I am surrounded by a fantastic group of players, it really is a wonderful feeling. The FK Zalgiris supporters stuck by us throughout the whole season and I would personally like to thank them for their continued support. I sincerely look forward to seeing all of the supporters once again, during the upcoming season, as I know that they shall always be behind us.

You grew up in Dakovo, a small Slavonian town, in eastern Croatia. Other famous Croat footballers such as Davor Suker and Mario Mandzukic also hail from this region. How did you originally get involved with football?

Well, I was around seven years old when I first became involved with football. My father was also an avid football fan himself, so I can remember both watching and playing football with him since a young age. One day, I decided to sign-up to a football academy and since then, the rest is history! Croatians absolutely adore football; many youngsters take part in football from a very early age. Croatia has always had a rich footballing heritage and it shows from the amount of young talents which we continue to produce year by year.

How does the Lithuanian A Lyga compare to other leagues which you have competed in, with regard to quality?

Throughout my career to date, I’ve been fortunate enough to be able to play in some very competitive leagues, all of which are of a high standard. Some of these include Ligue 1 (France), Bundesliga (Germany), Prva HNL (Croatia) and the Ekstraklasa (Poland). On top of this, I have also had the pleasure to play in Australia and Hong Kong too.

Overall, these leagues are a lot stronger than the A Lyga, but there are certainly many positive developments taking place within Lithuanian football at the moment.

FK Zalgiris is a fine example of this, as we have showed over the past couple of years that we can match or even be stronger than other domestic European sides which we have faced, such as FK Bodo/ Glimt, from Norway and Ferencvarosi TC, from Hungary. From all that I have witnessed on and off the pitch, I believe that the A Lyga has a bright future and it will begin to show over the coming years.

Does your family also live with you in Lithuania? If so, how have they settled in? Is there something particular about Lithuanian culture which you enjoy?

For the past three years, my family has been living with me here in Lithuania. However, from the beginning of this year, my family moved back to our homeland, Croatia, as my eldest son shall start school there. I will most certainly miss my family, but they will all come to visit me during the summertime, which I am thoroughly looking forward to. In the beginning, my family and I lived in Marijampole, which was a city full of nature, pleasant walks and lots of greenery. Following our time spent living in Marijampole, we then moved to capital city, Vilnius, which we found to be full of opportunities, places to visit and beautiful architecture. My wife and I are extremely fond of Vilnius, as there are many places to eat, drink coffee and walk, which reminds us of our home in Zagreb. Lithuania has definitely been a pleasant and comfortable country to live in.

Through a foreigner’s eyes, do you notice positive developments taking place within Lithuanian football? From a British perspective, it can be heart breaking at times to witness such low attendances throughout the league, especially for matches of high importance. How do you feel about it?

The A Lyga has certainly improved over the last few years, I myself have noticed such developments. The league itself is very competitive and while there may not be large amounts of funds available as there is for other domestic European leagues, this has paved the way for many young, talented players to be presented with an opportunity to play regular first team football. More foreign players are coming to the A Lyga, most famously, Keisuke Honda, from Japan. Regarding attendances, I have noticed two contrasting sides: during A Lyga games, the stadium is not particularly full, but for domestic European competitions, the stadium is full. I’d like to see more full stadiums for A Lyga games across the country as it benefits us players enormously in terms of spirit and desire.

In total, you can speak three languages: Croatian, English and German. Do you enjoy learning new languages and what other interests do you have outside of football?

I began to learn English when I was a child, but when my professional career really took off, I needed to improve my skills, as the English language is the most widely spoken common language throughout the world these days. When I played in Germany, the club whom I was playing for sent me to a school in order to learn German, as I needed to communicate to my teammates and coach efficiently. On the flip side, I do regret not learning French to a good standard, I’ve slowly lost my efficiency over time due to lack of regular conversational practice. Outside of football, I mostly spend time with my family and play with my children. When my family is not around, I enjoy indulging in a series on Netflix or even playing video games.

You have now played football professionally for eighteen years and counting. How many more years do you plan to play for and have you got any plans in place for what you’d like to do after finishing your career?

Honestly, I do not know how long I will continue to play professional football for. It all depends on how healthy I feel and to how content I feel with my own performances on the pitch. At the end of the upcoming season, I shall decide what may be the best way to proceed. Despite everything, I would just like to focus on one thing at a time and my next primary goal is to have another successful season with FK Zalgiris. One thing that is for certain though, is that I’d like to remain within the football industry after my playing career ends. I adore this sport and believe that I can offer a lot of knowledge and experience to the game.