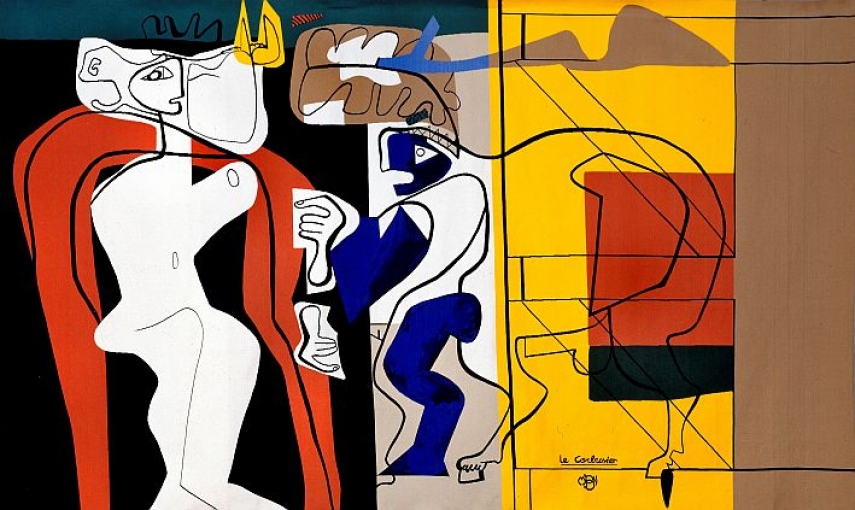 RIGA - A Latvian centenary exhibition, Colour of Gobelins. Contemporary Gobelins from the “Mobilier national” Collection in France, will be on view at the Museum of Decorative Arts and Design in Riga (Skārņu iela 10) from 6 June to 30 September 2018, complementing the programme of the 6th Riga International Textile and Fibre Art Triennial Tradition and Innovation.

The exhibition Colour of Gobelins offers a look into the textile collection of Mobilier national (National Furniture Foundation) in France, where the Gobelins Manufactory, since its founding in the 17th century, continues to cultivate outstanding traditions of craftsmanship and maintains a constant link to modern art, reflecting every period’s originality of aesthetic values and its special role on the stage of art. Along with works made from sketches of many famous artists, the exhibition also includes two recent large-format tapestries made at Mobilier national manufactories in Paris and Beauvais by Latvian textile artist Egils Rozenbergs, Reflections – Contemplation 1948.13 and Reflections – Contemplation 1948.20.

France can pride itself with gobelin-weaving traditions and manufactories, which have over the centuries realised sketches of important French artists in the gobelin technique. In the 20th and 21st centuries this valuable experience continues to be carefully kept and preserved. Under the supervision of the French Ministry of Culture there are three large historically active gobelin-weaving manufactories and two workshops: La Manufacture nationale des Gobelins (Paris, established in 1601 during the reign of King Henri IV), La Manufacture de Beauvais (Beauvais, established in 1664 during the reign of Louis XIV), La Manufacture de la Savonnerie and Les ateliers de dentelle d’Alençon et du Puy, which are joined together in Mobilier national (full name – Mobilier national et Manufactures nationales de tapis et tapisseries). Mobilier national is a state-owned institution of national importance. The fund’s collection consists of around 200 000 objects created from the 17th century to nowadays.

The curator of the exhibition is Marie-Hélène Massé-Bersani, Director of the Gobelins, Beauvais and La Savonnerie Textile Creations Production Department. During a visit to Riga in January 2017, having studied the collection of textile art of the Museum of Decorative Arts and Design (MDAD) and appreciating the historically unique pearl of 13th century Romanesque architecture that is the St. George Church which currently serves as the museum’s main exhibition hall, Massé-Bersani chose colour, which owing to the specifics of the gobelin technique possesses suggestive power, as the guiding theme in the selection of works for the exhibition in Latvia.

“The choice of 15 tapestries was based on colour and its essential role in the art of weaving. The exhibition scenography is conceived as a dialogue of colours performed by outstanding masters from Henri Matisse to ORLAN, and also including Jean Lurçat, Joan Miró, Le Corbusier, Raymond Hains, Patrick Tosani, Philippe Favier, Erró, François Boisrond, Gérard Schlosser, Vincent Bioulès, Jacques Monory, Christophe Cuzin or Éric Sandillon. Like movable walls the tapestries shape the exhibition’s architecture without closing the space completely and inviting the visitors to see the works from both sides,” says curator Marie-Hélène Massé-Bersani.

The aim of the project is to let visitors appreciate the unchanging traditions and canons of the Gobelins Manufactory, which are kept and cherished as treasures of French national culture. From generation to generation, artists continue to offer their sketches, which are transformed into gobelin tapestries. The work of the state manufactories is based on establishing close dialogue between the craftsman-weaver and the artist. The weaver cannot be considered either the author of the original work or a mere performer of a commission. By participating in creation of the co-work, he is an interpreter in the most noble sense of the word. The weaved tapestry is not a copy, but an authentic work, where the potential of each sketch is expressed on an entirely new level. The material, size, dyers’ work and the talent of weavers gives the textile a true originality and special expressiveness. The works by Egils Rozenbergs will serve as the basis for a documentary story about the transformation of the artist’s sketch into a monumental composition.

The exhibition Colour of Gobelins will delight everyone, not only because of the beauty of the selected exhibits, the creation of which has involved the experience nourished for generations and the work of many minds and hands. It is an inspiring story of the power of traditions which are still able to re-create the world and time in which we live.