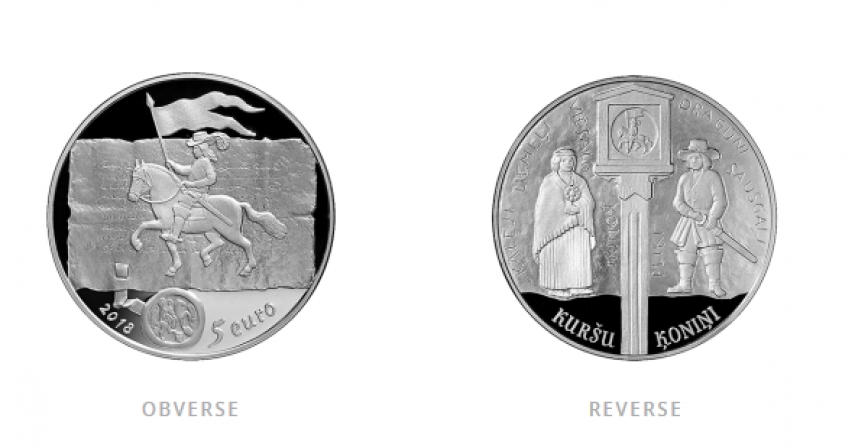 RIGA – The whole mintage of the new silver collector coin dedicated to the Curonian Kings, a cultural group of free Latvian peasants that for many centuries inhabited seven villages in western Latvia, has been sold out at Bank of Latvia Cashier’s Offices, the central bank’s spokesman Janis Silakalns told LETA.

“People’s interest in the collector coin Curonian Kings was very strong and the coins have been sold out both via www.e-monetas.lv and Bank of Latvia Cashier’s Offices in Riga and Liepaja,” the Bank of Latvia spokesman said, adding that the sale was limited to four coins per buyer.

Part of the mintage, or 300 coins, will be offered to numismatists and philatelists in a joint issue with a special postage stamp dedicated to the Curonian Kings, due out in September. This is the first such joint issue arranged by Latvijas Pasts national postal company and the Bank of Latvia.

As reported, the Bank of Latvia on Friday issued a new silver collector coin dedicated to the Curonian Kings.

The obverse of the new collector coin features a rider on a horse, with a feather in his hat, a sword at his side and a banner in his hand, against the background of a document. The reverse depicts the Peniki column with Koninciems' coat of arms, a woman dressed in the folk costume and a man with a sword; in the background, the names of the seven free villages of Courland are inscribed.

“In the run-up to the centenary of Latvia, we are both looking at the past and thinking about the future. This coin is dedicated to Curonian kings, part of the Latvian nation who have managed to safeguard their personal freedom and independence for centuries,” the Bank of Latvia said in a statement to the press.

Curonian kings were the natives of Courland living in seven free villages of Konini, Kaleji, Pliki and Ziemeli in Turlava parish, Draguni in Rumba parsih, Viesalgi in Snepele parish and Sausgali in Padure parish. As vassals they received land and privileges from the Livonian order. In 1230, an agreement concluded between king Lamekin (Lammekinus Rex), representing most of the Curonians, and an authorized representative of a legate of the Roman Pope established that the Curonians had to take part in battles against pagans; they had the right to be free as long as they remained Catholics. The agreement was short-lived as the religious powers and the powers and influence of the Livonian Order tended to change; however, the tradition of freedom was established.

The collector coin Curonian Kings was created by artists Arvids Priedite (the graphic design) and Ligita Franckevica (the plaster model). The coin was struck by UAB Lietuvos Moneto Lalykla (Lithuania).

The price of the coin at Latvijas Banka Cashier's Offices and via e-monetas.lv is EUR 43. The maximum mintage of the coin is limited to 2,500.