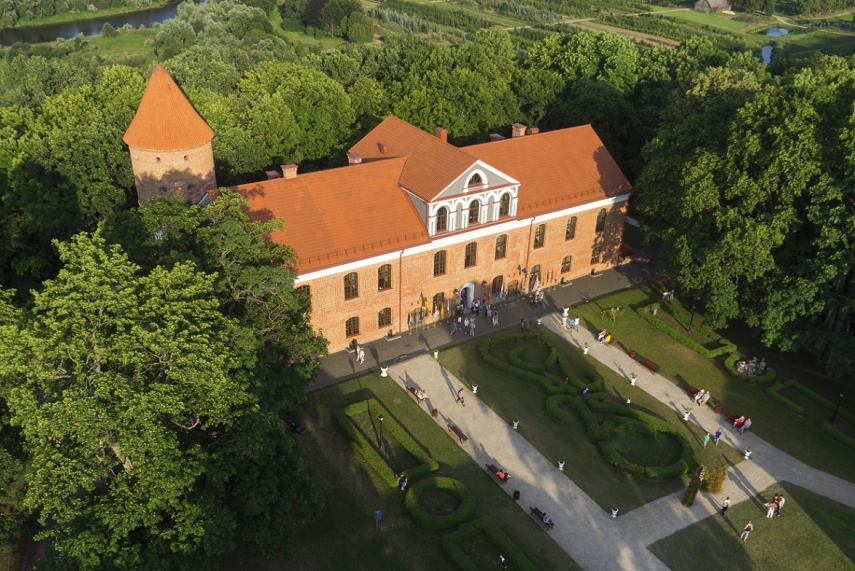 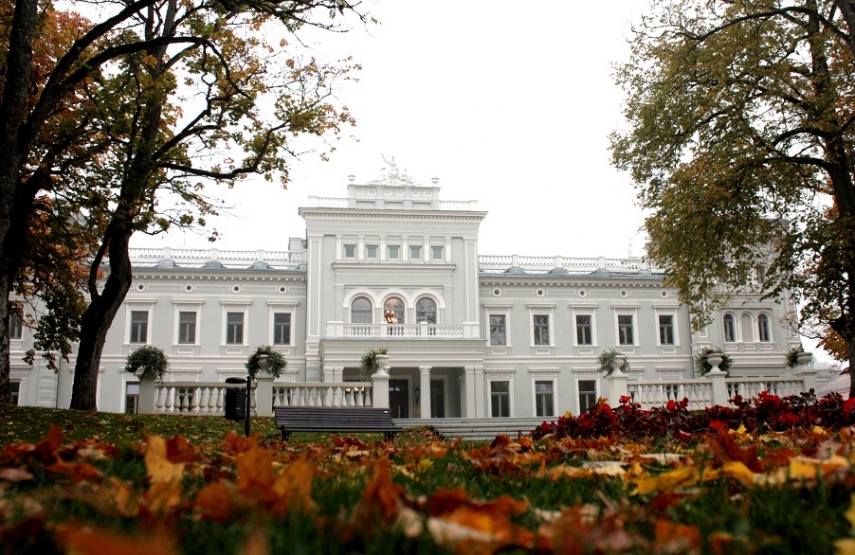 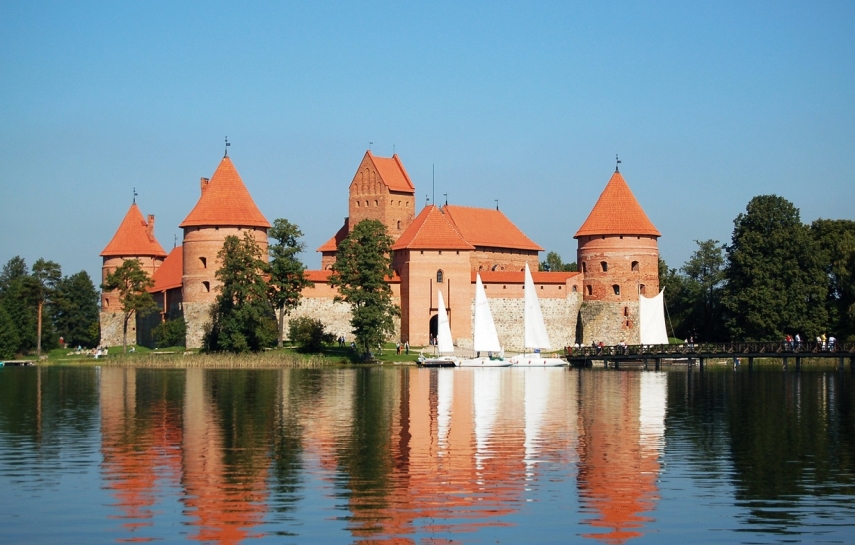 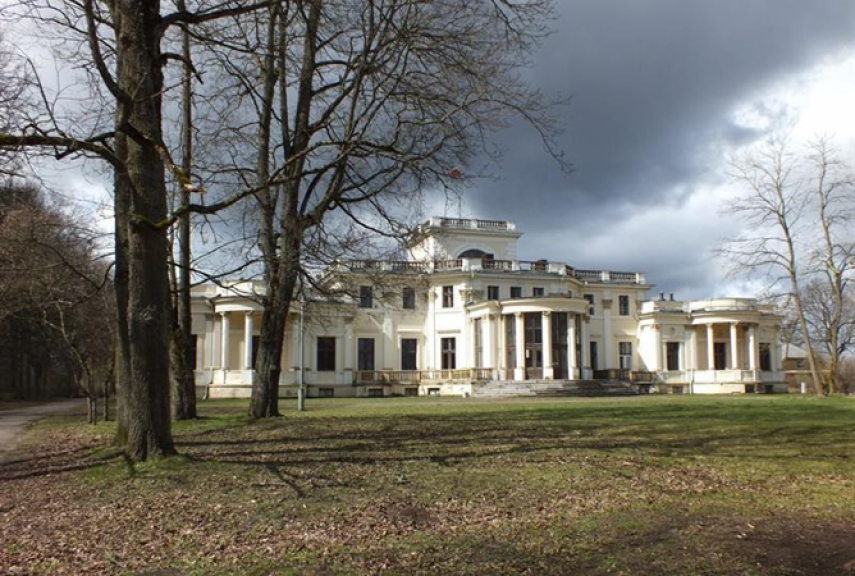 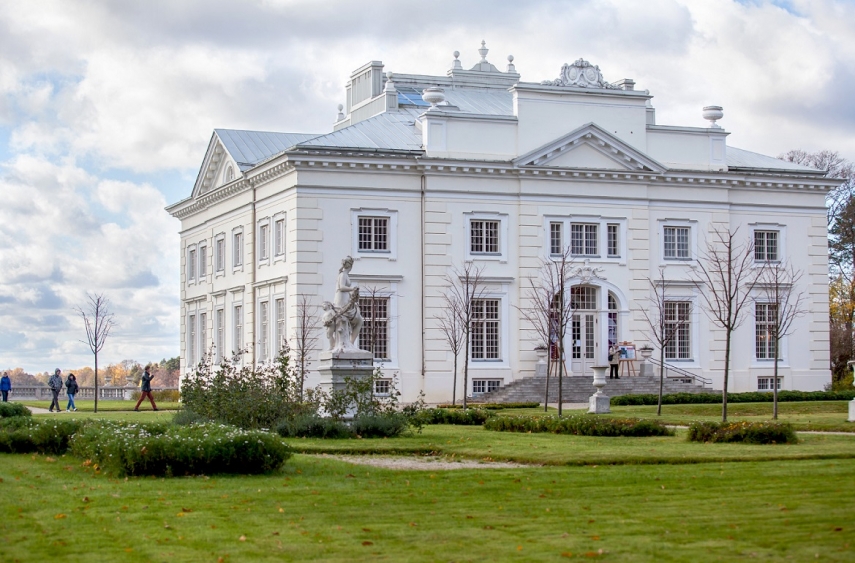 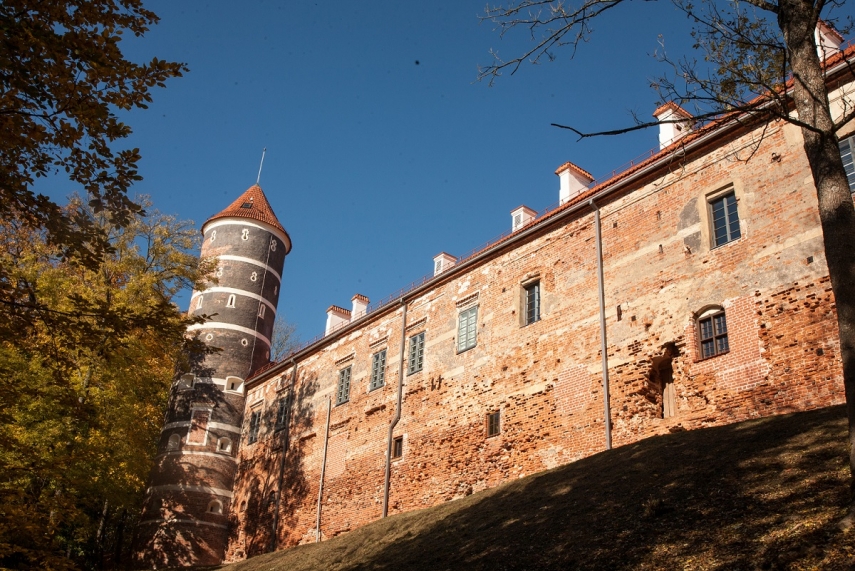 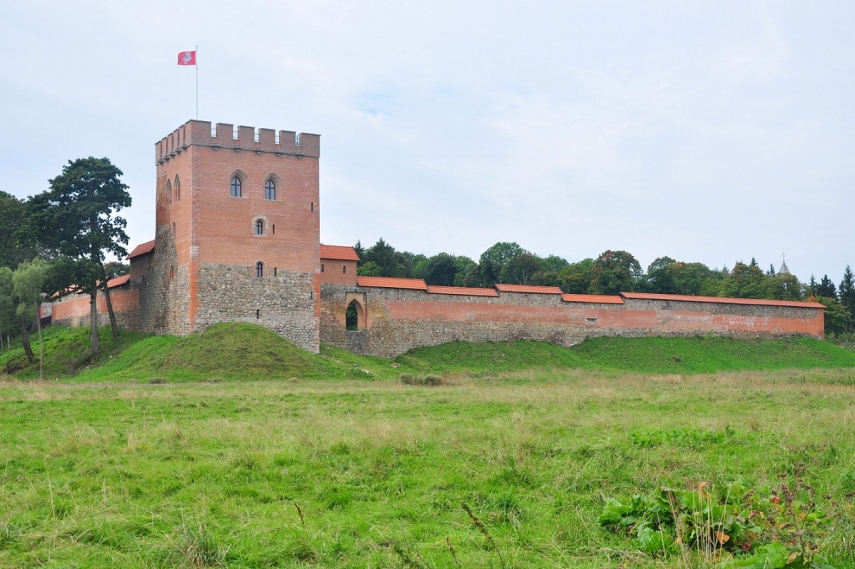 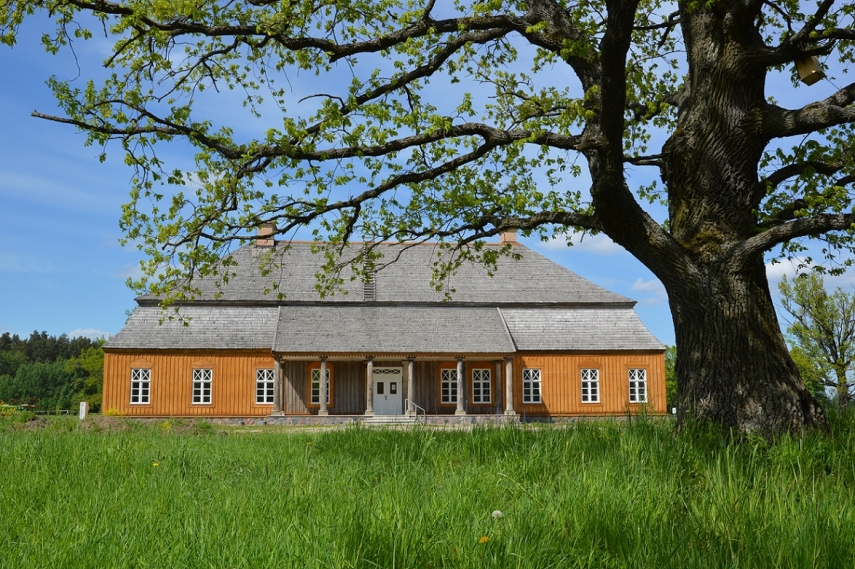 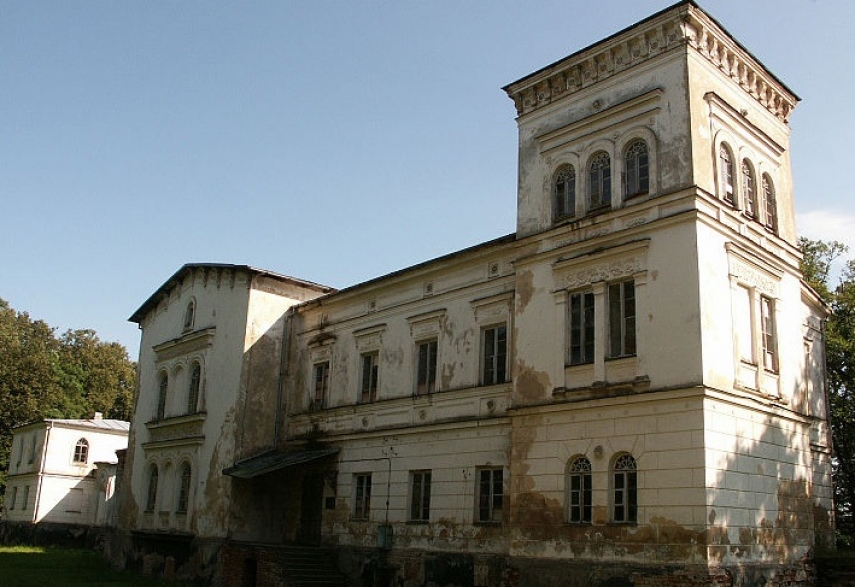 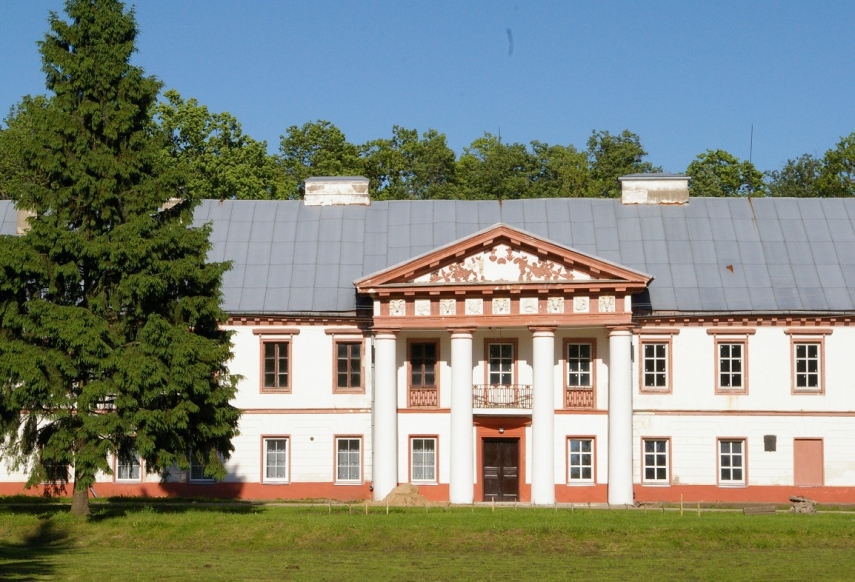 When you have a chance to visit the old buildings of Lithuanian historical castles and manors, have a closer look at the uniqueness, peculiar details and style of each and every one of them. It is, after all, an expression of the taste and ambition of some nobleman or castle/manor owner, the result of the architect’s creative work, self-expression, artistic impulses and the quest to reveal aesthetics of the prevailing architectural style. The exterior of Lithuanian historical buildings reflects the efforts to create the most beautiful pieces of architecture at different periods of time.

Castles and manors allow us to travel through time and admire different architectural styles, from Gothic to late Classicism, Romanticism and Historicism. Western European culture and professional architecture were spreading in Lithuania as the most powerful and influential noblemen of the Lithuanian State were building their residences, representative castles and manors.

The castles of Trakai and Medininkai – Gothic residential and defensive fortresses of Grand Dukes of Lithuania – date back to the 14 th century. Medininkai Castle was one of the fortresses used for defending the Lithuanian State against Teutonic and Livonian Orders. Trakai Peninsula stone castle was built in 1362–1382 and 1414–1430. It is one of the largest castles in Lithuania, covering about four hectares of land. The old towers and defensive walls still stand between the Lake Galvė and the Lake Luka. The surviving old defensive walls of Trakai Peninsula Castle and Medininkai Castle create a medieval atmosphere, where you can truly feel as if you have travelled through time deep into the past.

Many have a vivid picture of Trakai Island Castle, sharply contrasting with the lakes surrounding it. Built by Grand Duke Kęstutis, the castle is believed to have been designed by an architect from the Teutonic Order. The residential palace on the Castle Island in the Lake Galvė is surrounded by a defensive wall and has a stone-paved courtyard between the three-storey castle buildings.

While travelling along the River Nemunas, the father of Lithuanian rivers, it is worth visiting the Renaissance Panemunė Castle, a perfect example of the 17 th century heritage. The castle was built by Janusz Eperjesz, a noble of Hungarian descent, around 1604–1610. It is believed to have been designed by Dutch architect Peter Nonhart, who also reconstructed the Lower Castle of Vilnius. Panemunė Castle can be considered the most authentic residential castle of the 17 th to 18 th centuries in Lithuania – it has barely changed to this day.

Renaissance Raudondvaris Manor with a round tower was built in the early 17 th century – not only the manor, but also the settlement was named after its bright colour. After the fire in 1831, Benedykt Emanuel Tyszkiewicz invited famous architects to reconstruct the devastated castle buildings: Jonas Margevičius from Lithuania, Jakob Woller from Prussia and Cesare Anighini from Italy. F. Diubua de Monpere, who contributed to the renovation of the castle (1840), brought English neo-Gothic elements to the ensemble – the stables stand out with their ornate neo-Gothic shapes.

Architecture of wooden manor houses was widely spread in the Grand Duchy of Lithuania, compared to the neighbouring countries, but, unfortunately, it has not survived to this day. The oldest surviving examples in Lithuania are exceptional. They include Aristavėlė Manor built in 1700 and currently found in the Open-Air Museum of Lithuania in Rumšiškės. Aristavėlė Manor – a perfect example of wooden Baroque architecture – is decorated with a broken configuration roof with profiled cornices. While the walls of the manor house are classical, the ceilings feature both elements of Louis XV style and folk motifs.

Some of the surviving examples of manor architecture of the 18 th century can be found in Liubavas Manor near Vilnius. The old manor buildings, servants’ quarters (officine) and orangery were built in the Baroque style and have been fully restored. The buildings of Liubavas Manor were in extremely poor condition before restoration. There were some serious doubts whether the decaying buildings built of semi-burnt bricks were worth saving. However, thanks to the great enthusiasm and efforts of the preservationists of the Lithuanian heritage, today the oldest orangery in Lithuania and the adjacent servants’ quarters have been restored and adapted for cultural use. The brightly coloured baroque ensemble of Liubavas Manor buildings is surrounded by trees and ponds of the old park, as well as romantic serenity and tranquillity.

Between the late 18 th century and early 19 th century, residences of nobility in Lithuania were built in the Classicism style – the buildings are full of classics, symmetry and replicated forms of the Antique architecture. They were designed by the best architects of that time: Laurynas Gucevičius, Marcin Knackfus, Karol Podczaszyński, Mykolas Šulcas from the famous Vilnius School of Classicism, as well as renowned European architects.

In the late 18 th century, the design of Laurynas Gucevičius (1753–1798 m.), the most famous representative of Vilnius Classicism and the best Lithuanian architect, was used to build Čiobiškis Manor. The one-storey building with its portico and bold and elegant forms stands near the confluence of the rivers Neris and Musė.

Podczaszyński (1790–1860 m.), a representative of the late Vilnius Classicism and a student of Gucevičius, designed manors 1824 to 1828. One of his most famous works is Tuskulėnai Manor in Vilnius, built around 1825. The rectangular one-storey manor with volumetric composition radiates restrained classics.

In the 19 th century, the popularity of Romanticism was spreading in Lithuania, with representative buildings replicating the spirit of medieval architecture. An example of Romanticism is Italian-style Belvederis Manor, built around 1850, with an angular tower, asymmetrical structure and restrained, neo-Renaissance features. Raguvėlė Manor, designed by Podczaszyński’s student, architect Tomas Tišeckis (1824–1861), has features of Classicism and Romanticism. The building echoes forms of the Antique architecture and is decorated with romantic arcades.

Architecture in the second half of the 19 th century and early 20 th century was dominated by Historicism. At that time, the construction of manors did not require permission of the Russian administration, so founders invited architects from Western Europe. For example, neoclassical TrakųVokė Manor, commissioned by noblemen Tyszkiewicz, was designed by Italian architect Leonard Marconi (1880), and Užutrakis Manor by Polish architect Jozef Huss (1901).

Plungė Manor, commissioned by Duke MichałOgiński, was designed by German architect Karl Lorenz and built as a luxury residence in 1879. But not just the main building is impressive. The whole ensemble of the manor is gorgeous with bold neo-Gothic shapes in the stables.Meanwhile, the architectural ensemble of Zypliai Manor features neo-Baroque shapes that are not very common in Lithuania. This manor was reconstructed by Count Tomasz Potocki in 1898–1901.

Naturally, most of the castles and manors in Lithuania were built in the later styles of Classicism, Romanticism and Historicism, but there are also quite a few historical buildings from earlier times. A castle or manor ensemble, which has been restored and rebuilt multiple times, often contains features of both earlier and later architectural styles. Each historical building of the Lithuanian castle or manor ensembles will reveal interesting details, will tell you about the artistic taste and ambitions of the nobles who lived there, and so much more...