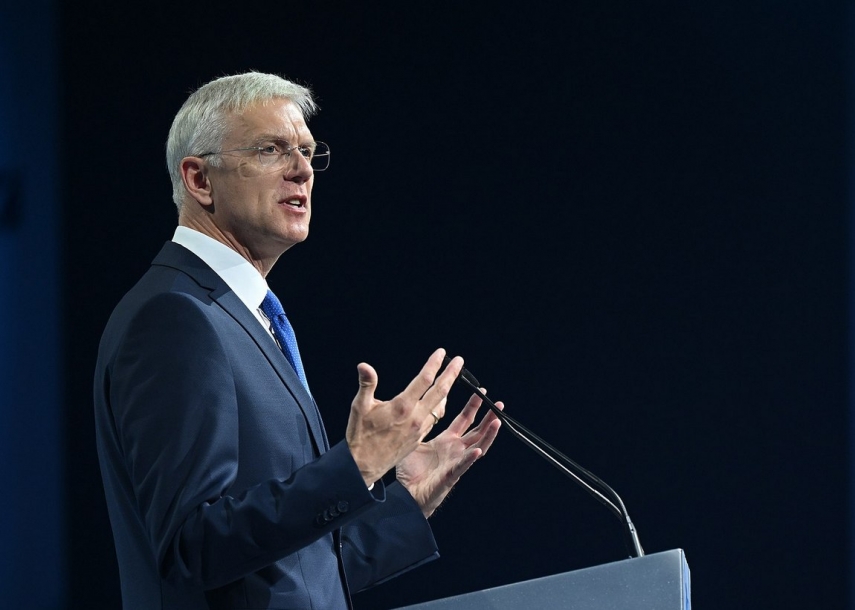 The Latvian prime minister indicated that the Baltic states have been spearheading the calls for sanctions on Russia and allied support for Ukraine. Lithuania, Latvia and Estonia have also been at the vanguard when it came to provide assistance to Ukraine, Karins stressed, noting that the Baltic stats have also been bearing the brunt of economic consequences of the sanctions on Russia, but that this has not weakened their commitment to Ukraine.

With our example we have shown that there is no need to be afraid and that it is much more important to support Ukraine than to think about short-term and seeming benefits of maintaining ties with Russia. We in the Baltics understand that Russia must be stopped and Ukraine must won, because our goal is to break Russia's imperialist thinking, tendencies and actions," the Latvian premier said.

Karins informed that the meeting of the Baltic prime ministers in Riga focused on the security situation, with the heads of government being unanimous on the need to increase investments in defense to 3 percent of GDP. The prime ministers also agreed to continue work with NATO allies to implement the decision taken at the NATO summit in Madrid to deploy a brigade-size unit in each Baltic state. Karins underlined that the Baltic states must also keep working on joint procurements.

As for discussions on energy, Karins said that the Baltic states must improve their infrastructure and continue investing in new power generation capacities. Latvia, Lithuania and Estonia are moving towards desynchronization from Russia's power grids as fast as possible.

The prime ministers also discussed the Rail Baltica railway project, which in Karins' words is one of the region's most important infrastructure projects, which besides its economic dimension also has a military and security dimension.

Estonian Prime Minister Kallas said that when it comes to energy security, the Baltic states have taken several important decisions over the past year to end their dependency on Russian energy. Soon, the Baltic states will stop buying Russian gas, ensuring at the same time that the region is not left without gas supply. "We have also concluded electricity trade with Russia already in the spring," Kallas said.

"These are important steps to limit the revenues of the Russian war machine. Russia is planning countermeasures to the price ceiling, which is a price floor. This shows that the price ceiling is definitely uncomfortable for them. But more needs to be done to reduce Russian energy revenues. We will return to discussions regarding the oil price ceiling in the EU in January," the prime minister added.

According to Kallas, support for Ukraine was also discussed at the meeting.

"Our support for Ukraine will continue until Ukraine wins this war. Russian soldiers must leave the territory of Ukraine. This is the way to peace. Talk of peace or a ceasefire today is dangerous. This is a Russian military interest. A break will give them time to prepare a new attack and also prepare those mobilized," Kallas said.

Lithuanian Prime Minister Ingrida Simonyte noted that Russia is barbarically trying to break the resistance of the Ukrainian people by destroying the country's civil infrastructure. These attacks highlight countries' moral duty to increase assistance to Ukraine even more.

Simonyte indicated that Lithuania, just like Latvia and Estonia, promptly responded to the urgent needs of Ukraine's infrastructure. During Friday's meeting, the Baltic premiers discussed how to increase support to Ukraine so it can win the war.

If it not stopped, Russia will be a threat to Euro-Atlantic security for a long time. Its aggression will continue beyond Ukraine's borders. We need to be strong and must not back down seeing that [Russian President Vladimir] Putin makes no attempts to start peace talks. He wants a break to regroup his forces, Simonyte warned.

The Lithuanian prime minister stressed the need to keep imposing sanctions on Russia and supporting Ukraine.

While discussing the strengthening NATO's eastern flank and Baltic unity, which already helped adopt many important decisions at the NATO Madrid Summit, including those aimed at boosting deterrence and defense, the prime ministers agreed that tangible results have to be achieved by the alliance's next summit in Vilnius.

"Next year, we will have to implement a number of projects related to military mobility projects (and) host nation support, which under NATO's standards are not included in the defense (spending) percentage, but that will be expenditures directly related to Lithuania's defense and security," the prime minister said.

"This means that the real spending on Lithuania's defense and security will be between 2.5 and 3 percent of GDP in any case next year," she added.

If Lithuania does not borrow for defense needs next year, its allocations specifically for defense will account for 2.52 percent of GDP, unchanged from this year.

Estonian Prime Minister Kaja Kallas said that her country will surpass the 3 percent of GDP target in two years.

"As to Estonia's defense budget, it will exceed 3 percent in 2024," she said. "Our trajectory has been mapped out, as have our purchases", she said.

The meeting of the Baltic Council of Ministers with the participation of Karins, Kallas and Simonyte took place in Riga on Friday.