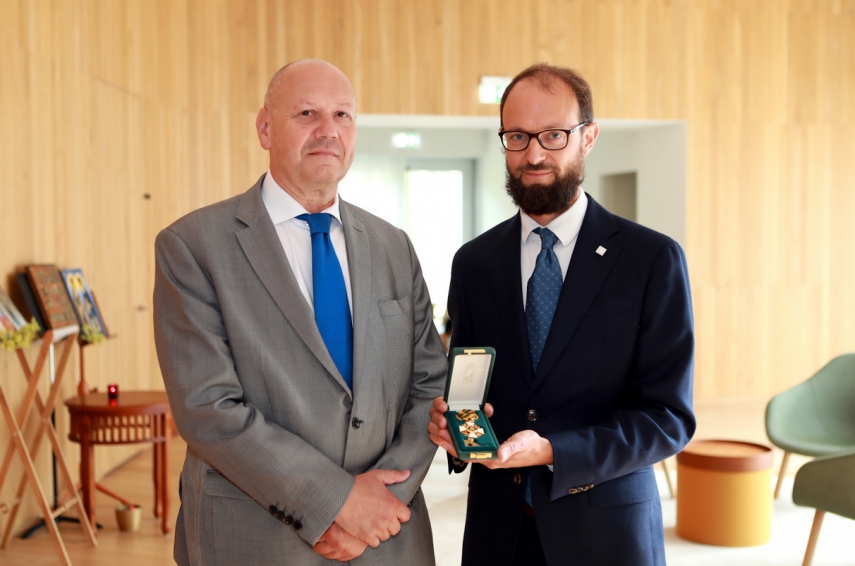 The composer Arvo Pärt was awarded the Officer grade of the Order of the Oak Crown of the Grand Duchy of Luxembourg (Ordre de la Couronne de chêne) in recognition of his outstanding merits as a composer and major figure of European culture. The high award was presented at the Arvo Pärt Centre by Ronald Dofing, Ambassador of the Grand Duchy of Luxembourg, and was accepted on behalf of his father by Arvo Pärt’s son, Michael Pärt.

“The music of Arvo Pärt has not only bridged the European musical legacy from its roots in Gregorian and Byzantine chants, as well as Flemish and northern choral masters up to the present, it has contributed to opening doors for a more humanistic future through its spiritual dimension and the unrelenting search for simplicity and the most adequate expression of the inner voice. The quest for truth and universal harmony overcomes barriers. This is also an essential lesson for our troubled times,” said Ambassador Ronald Dofing.

The Order was established in 1841 by William II, King of the Netherlands, Grand Duke of Luxembourg and Duke of Limburg, and it is awarded for outstanding merits in the fields of economics, social activities, culture or sport. In exceptional cases, the order is also awarded to foreigners. The Order of the Oak Crown has been previously awarded to Prince Charles, Japanese Prime Minister Shinzo Abe, British Prime Minister Winston Churchill and President of the United States Dwight D. Eisenhower, among others.