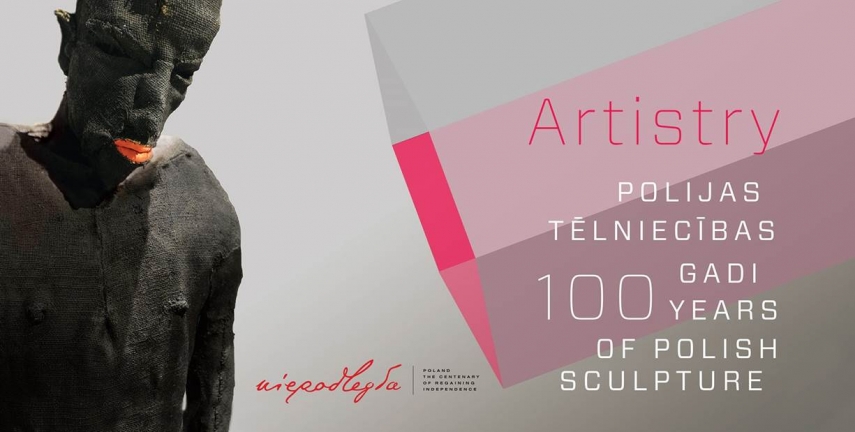 The Centre of Polish Sculpture in Orońsko in collaboration with Art Museum RIGA BOURSE and the Adam Mickiewicz Institute in Warsaw, with the support of the Embassy of the Republic of Poland in Riga is holding the Artistry. 100 Years of Polish Sculpture exhibition, which is taking place on the 100th anniversary of Poland regaining its independence and the establishment of the Latvian state. Daria Malicka’s work Kunszt or Artistry, a concept which could be translated into English as ‘mastery’ or ‘proficiency’ has been chosen as the motto for the project. These words describe the sculptures, objects, installations and video films that have been created in the past hundred years by several generations of Polish artists, which have been brought to Riga from the collection of about 2000 works.

The Orońsko Sculpture Centre’s collection of sculpture and environmental art works has developed historically, particularly in the past 30 years, with careful thought being given to supplementing the collection with the works of both classic as well as very young artists: starting from the stylization of form typical of modernists, abstraction, expression right up to contemporary spatial objects, installations, video and neon light projects. Along with such classic treasures as the works of Katarzyna Kobro, August Zamoyski, Barbara Zbrožyna, Jerzy Jarnuszkiewicz, Władysław Hasior, Magdalena Abakanowicz and Wojciech Fangora, sculptures from the currently powerful middle generation of artists Mirosław Bałka, Krzysztof M. Bednarski and Sylwester Ambroziak can be viewed at the exhibition, as well as sculptural forms from younger generation artists like Michalina Bigaj and Martyna Szwinta.

The selection of works is supplemented by photo documentation of objects which could not be transported to Riga from the Orońsko Sculpture Park, for example, Jarosław Kozakiewicz’s Transition or Maciej Szankowski’s Penetrations of Space. It was also important to show the phenomenon of the School of Timber Industry headed in the inter-war period by Karol Stryjnski, in the overview of Polish sculpture, which is characterized by several works from the Tatra Museum in Zakopane. The refined beauty of these works in the style of Polish Formism, created by professors together with students, embody both Polish art’s rebirth in the European avant-garde direction, as well as the local characteristics of the Podhale region.

The presentation of the collection is supplemented by Róża Fabjanowska’s and Sławomir Malcharek’s film about the Centre of Polish Sculpture in Orońsko.

The organizers of the exhibition would like to express their thanks to the Tatra Museum in Zakopane and the Polish History Museum in Warsaw.