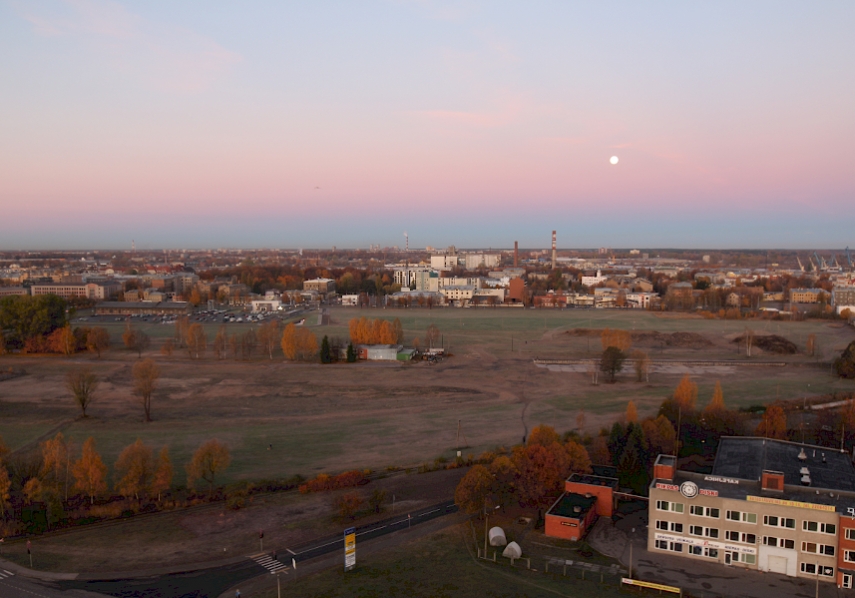 WIDE OPEN SPACE: The future location for a magnet of creativity and culture?

The Latvian Museum of Contemporary Art Foundation (LMoCAF) has announced that seven international architectural firms have been shortlisted to build the new Latvian Museum of Contemporary Art (LMoCA).
The museum will be the centrepiece of the New Hanza City (NHC), a 24.5 hectare commercial and residential development located in the northern suburb of Riga, less than a kilometre from the geographical city centre, and two kilometres from Vecriga (Old Riga), the historical centre of the city.
The territory of NHC is owned by ABLV bank.

NHC will see the development of the former Riga Cargo Rail Terminal in the area bordered by Hanzas, Pulkveza Brieza, Skanstes, and Sporta Streets.
The site stands at the margin between the old and new: Hanzas Street forms a boundary line between the Art Nouveau district and the industrial area of Riga. Ornate historical buildings give way to industrial complexes built in late 19th century and developed further during the Soviet era.
Once completed, the planned exhibition halls of LMoCA will offer the largest exhibition space for contemporary art within the Baltic States.

“The selection of the architects was made by balancing skills, talent, and ability as shown in past projects,” said Malcolm Reading, the competition’s organiser. “Knowledge and experience of a contemporary art display was important but so was cultural and civic place-making: a fascinating element of the project is trying to make a new place in this part of Riga.”

The LMoCA will be the first museum to be built in Latvia after the restoration of independence.

“This new museum is a major initiative for Latvia and will showcase the country’s culture and artistic flair. Creating a museum, which can compete with others around the world and establish a distinctive presence on the regional cultural map, is a specialised challenge, so in the competition we have sought to concentrate on international designers who are experienced in this field,” said Romans Surnacovs, the chair of the LMoCAF.
A special exhibition will be created enabling the general public to see the shortlisted architectural firms’ designs, and to hear feedback.

The competition is scheduled for the end of May of this year, when the best design will be chosen. The winner will be determined by a two-stage jury after evaluating the design by a number of criteria: the compatibility of the proposal with the quality, value, and significance of the location (cityscape); architecture; the suitability of the museum building for the planned functions; its convenience for visitors and the future museum staff (usability); the materials and solutions offered to make the building sustainable both during construction and use (sustainability); and feasibility — if the proposal is assessed as being suited to Latvian climatic conditions and implementable within the set budget framework.
It is expected to cost circa 30 million euros to build the LMoCA. Its construction will be funded by the Boris and Inara Teterev Foundation and the ABLV Charitable Foundation.

The museum has set itself high ambitions. It wishes to become the most visited art museum in the Baltic States, as well as a cultural and arts centre of interregional significance. Its unique collection will span art and visual culture in Latvia and the Baltic Sea region from the 1960s.
How will the LMoCA stand up to other ambitious works slated for the region? The building of the Daniel Libeskind designed Modern Art Center (MAC) in Vilnius, for instance. Or Kamu in Estonia? Even a possible Guggenheim in Helsinki ... Is the region positioning itself to become a powerhouse for contemporary art?

“Definitely, the region will attract attention,” said Vikmane. “Although one cannot draw the equals sign between the development of contemporary art and the existence of museums.”
She added that the prospect of the museum opening up has also opened up a discussion on whether or not it is paradoxical to host contemporary art in a museum at all. Paradoxical or not, Vikmane is sure that museums, to say the least, foster cooperation within the art world on an institutional, national, regional, and global level.

Nevertheless, she stresses, a museum like the LMoCA would be no magic wand for the creation of impressive new art works from Latvia. It requires a great deal from the education system, a strong national policy towards the arts, cultural benefactors and philanthropists, and the artistic community themselves to step up to the plate.
Vikmane believes that both competition and cooperation will develop between the three Baltic contemporary art institutions. So far this has always proved a stumbling block. “We have also visited and consulted with museums in Lithuania and Estonia both about the programmes and infrastructure,” she said.

“The better we cooperate with each other, the sooner we will become visible to other regions,” she added. “Another aspect that demonstrates the potential for the cooperation is the united participation of all three Baltic States in Architecture Biennale next year. If I am not wrong — this is the first time, and sends a good sign.”
It is difficult to talk about a direct competition since each museum in the region will have its own focus, its own objectives and museum programmes, and the geographic distance is too short to do exactly the same thing.

However, international competition between the museums is necessary, Vikane believes.
“Sensible competition certainly improves quality. I believe that a great number of tourists already visit all three Baltic States when they come to the Baltic region, and now the potential for so-called cultural tourism within the Baltic States will be even higher,” said Vikane.
The LMoCA’s creative focus and collection will be concentrated on reflecting the interactive processes of contemporary art and visual culture in the Baltic Sea region from the 1960s.

The museum’s collection is comparatively small. At present, stored in a location that is unavailable to the public, there is a part of the holdings for the Latvian Museum of Contemporary Art owned by the Latvian State (318 works by 72 authors from six countries) and a part of the holdings owned by ABLV Bank.
On Sept. 23, 2005, ABLV Bank — then Aizkraukles Banka — signed the Memorandum of Understanding with the Ministry of Culture, undertaking the commitment to invest 1,422,800 euros for the purchase of works for the future Latvian Museum of Contemporary Art.

At present, the collection comprises 204 works by 31 authors in the total amount of 720 thousand euros. The works will be deposited to the Latvian Museum of Contemporary Art Foundation for the preparation of the museum’s exposition. The museum’s holdings will be included in the Joint Catalogue of the National Holdings of Museums.
Prior to the opening of the museum, its collection is going to be significantly increased. The long-term aim of the foundation is to diversify and add to the museum’s collection, in order to create a long-term exhibition programme, with the potential for exchange with exhibitions of international partner institutions.

The formation of the collection will take place parallel to regional research projects and scientific conferences.
The new museum will contain a variety of spaces for education, public engagement, and events with an emphasis on making all visitors welcome. Since the building will be adjacent to the City Garden, a profound design interaction between the park and building is expected, using the programme of events and experiences for this purpose.
The museum’s creative focus and collection will concentrate on reflecting the interactive processes of contemporary art and visual culture in the Baltic Sea region.

The LMoCA intends to operate as a creative hub and social condenser platform, serving as a meeting place to share cooperation projects and expertise, carry out creative experiments, and short-term co-production projects.
Before the LMoCA is completed, its collection will be not accessible for viewing either in person or electronically (the part purchased by ABLV Bank is available electronically, and it has been compiled in a book and published).
Similarly, there is a critical shortage of exhibition halls where to view Latvian contemporary art. Therefore, the LMoCA is going to improve the situation, not only in the context of availability of space and collections, but it will also allow Latvia to participate in the international arena with the help of museum organizations, involvement of curators, and creation of programmes in collaboration with other museums.