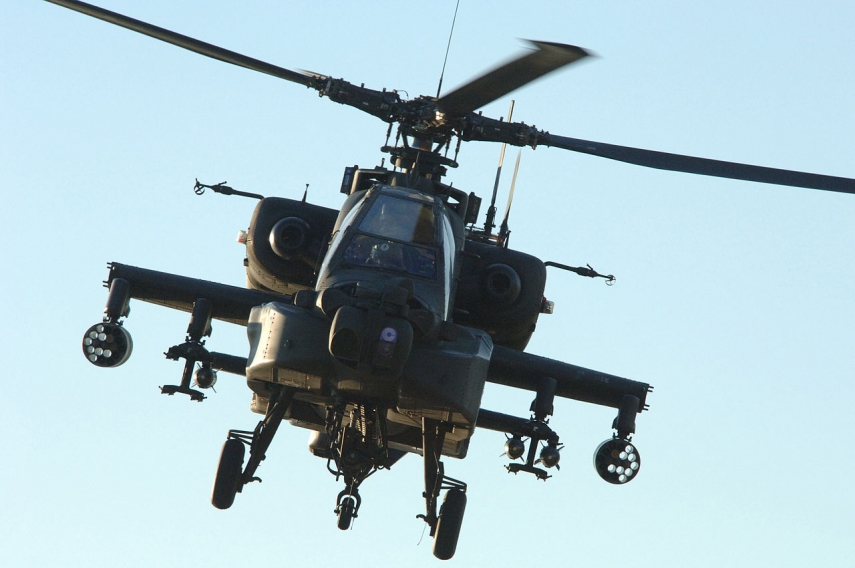 TALLINN – Five AH-64 Apache attack helicopters of the British Army landed at the Amari air base in Estonia on Saturday to engage in interaction with the Estonian defense forces and allied units for the next three months.

The Apache attack helicopters of 663 Squadron took off from their base at Wattisham Flying Station in Suffolk on Monday. Third Regiment Army Air Corps is deploying to the Baltics for three months, with the Apaches to be working in tandem with the Army's Wildcat battlefield reconnaissance helicopters to provide training opportunities to NATO allies on Estonia's annual exercise Kevadtorm (Spring Storm) and to the UK-led battle group deployed on NATO's enhanced Forward Presence (eFP).

"The deployment to Estonia is a fantastic opportunity for the squadron to challenge itself. It will test how we deploy and operate overseas, develop our operational partnership with the Wildcat and our ability to work alongside our NATO allies. Everyone in the squadron -- from ground crew to pilots -- has worked hard to prepare for Estonia, and we're looking forward to establishing ourselves in theater and contributing to NATO's Enhanced Forward Presence," Maj. Dave Lambert, commanding officer of 663 Squadron, said.

The helicopter deployment will boost the UK's presence in the Baltics -- known as Operation CABRIT -- to around 1,000 personnel, making the UK the largest contributor to eFP. The Wildcat's surveillance ability combined with the Apache's sensors and weaponry will be a steep change in troops' capabilities to detect, track and engage targets during the exercises they participate in, spokespeople for the British Ministry of Defense said.

Four multi-purpose AW159 Wildcat helicopters of the British Army arrived at the Amari air base last Saturday. The Wildcat, normally based at Royal Naval Air Station in Yeovilton, Somerset, are part of the UK Army Air Corps' 661 Squadron, and like the Apaches they will be located in Estonia at the Amari air base. The Wildcats will remain in Estonia until the end of May.

The crews of the helicopters that have arrived in Estonia will soon start familiarization and training flights in the Estonian airspace, including in the Tallinn area, and from time to time during the dark. These flights are extremely necessary for the pilots to get familiar with the Estonian airspace and terrain, and the pilots of the allies will do their utmost for the flights to disturb the day-to-day lives of residents as little as possible, military spokespeople in Tallinn said.

The UK for the first time deployed its helicopters to Estonia last spring.

Since mid-March, King's Royal Hussars of the British Army have been making up the core of the British-led NATO battle group deployed to Estonia.