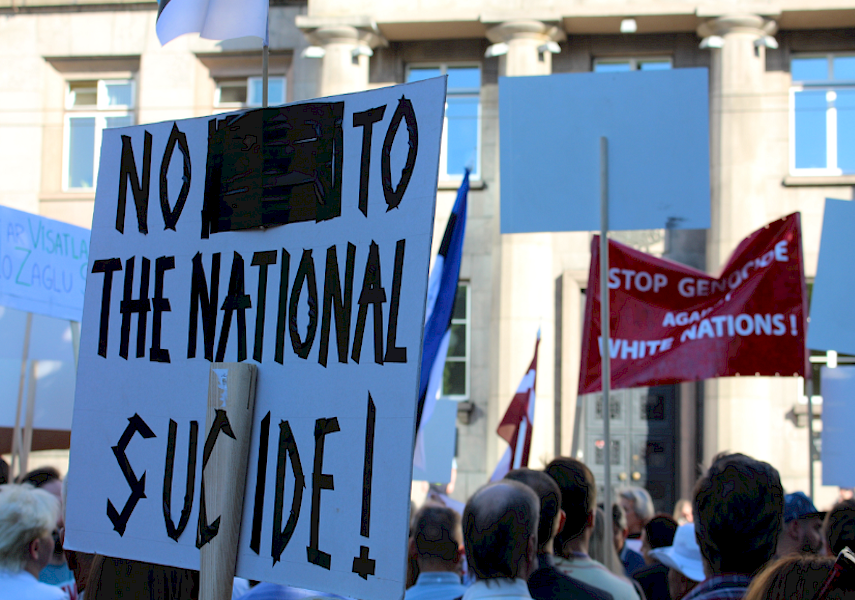 AT THE PICKETS: 300 protestors gathered by Latvia’s Cabinet of Ministers Building to protest the government’s decision to take in 250 refugees.

RIGA - In the early evening of August 4, just a short walk from crowds of sweltering tourists and ice cream vendors by Riga’s Freedom Monument, a three hundred strong crowd of protesters were picketing by Latvia’s Cabinet of Ministers Building. One of them: an old woman playing a folk song on her violin.

“I’m afraid of losing my traditions,” she said with tears in her eyes, putting her violin back in its box. “I already suffered under the Soviets. Finally we live in a free nation, and I don’t want to lose this again.”

The protest — organized by the right-wing grassroots political association, the Guards of the Fatherland — was opposing government plans to take in 250 refugees.

Initially the European Commission had assigned Latvia to admit 730 refugees — a quota designed to share the burden of the migration crisis in the mediterranean with other EU member states.

According to the UNHCR, the number of people applying for asylum in the European Union has risen by 44 % in the last year; a result of the ongoing humanitarian crises and wars in North Africa and the Middle East.

Only after testy negotiations in Luxembourg did the Latvian government agree to take in 250 refugees over the course of two years, starting this winter.

But even this compromise was not enough for the protesters on August 4. The protesters do not see 250 refugees as a small number in this small Baltic nation of 2 million people.

“For Latvia these ethnic compositions that we already have are very critical,”  said Janis Dombrava, a member of parliament from the National Alliance party, a right wing partner in Latvia’s center-right government coalition.

Since gaining its independence from the Soviet Union in 1991, Latvia has been at pains to integrate its large Russian speaking minority of almost 40% of the population.

A quarter century on, 12 per cent of the population still remain “non-citizens”, holders of  grey passports that technically belong to no state.

“Latvians can become a minority once again in their own country and we don’t want this to happen,” he told The Baltic Times, quick to classify this as Latvia’s own refugee problem that should exempt them from taking refugees.

Dombrava believes Latvia has enough challenges as a fledgling nation without being saddled with burdens from Brussels.

“I think Mr. Juncker sees some political opportunities and he doesn’t respect the countries that will be affected by his decisions,” stressed Dombrava. “I think everyone should know that you cannot push things on countries that go against its will.”

He was attending the protests because he believed Latvian negotiators showed insufficient political will at the negotiating table, pointing to Hungary’s exemption from taking on refugees.

Members of several public organizations and nationalist groups members of parliament were there in force to show their opposition to the government’s immigration policy.

They were joined by their ideological kin from Lithuania and Estonia. Many from these two neighboring Baltic States had driven at least four hours on a hot working day to show their support in the Latvian capital.

The upstart Conservative People´s Party of Estonia (EKRE) — which gained its first seats in the elections to the Estonian parliament, the Riigikogu, this March —has forged an agreement of understanding with the National Alliance in Latvia on this issue.

“In Estonia, there are already big protests, even bigger than in Latvia,” says Jaak Madison, referring to demonstrations in the Estonian capital of Tallinn back in June.

At 24, Madison is the youngest politician ever to be elected to the Riigikogu, and is already presiding as Vice chairman of its EU affairs committee.

Estonia has agreed to take in 150 refugees — the lowest in the EU apart from Hungary, Malta and Cyprus.

“There have already been Latvians joining the protests in Estonia … We have to stick together,” he tells The Baltic Times. “We have the same goal.”

In Lithuania there have not been any protests so far — the rationale behind members of the Lithuanian Nationalist Youth Union making their day trip to Riga.

Many protesters called on the government to hold a referendum. Some posters were extreme. “No to NATO victims in Latvia,” read one. “An international tribunal for Latvia’s top officials,” read another.

Two protesters carried one which read: “Stop Genocide Against White Nations!”
Like many protestors, those bearing this poster refused to give their names, but mentioned that they feared an African invasion of Europe.

One protester was escorted out of the crowd by police. His sign “I’m with stupid” had gone down badly with the rest of the crowd.

When spoken to, many in the crowd were not against taking in refugees in general but against what they see as the undemocratic way the decision had been made.

On the one hand they have the feeling that Latvia’s rights as an independent and sovereign nation are suppressed by the European Union.

On the other hand they feel betrayed by their own government that took on the decision without bringing it to the Parliament.

Others prefer to call them economic migrants rather than refugees, confused about why refugees could flee all the way from the mediterranean to the Baltic or were not going to safer places in their continents of origin.

Another fear of the protesters is that their government is only taking refugees in but has no policy how to integrate them.

For the former Latvian president Vaira Vike-Freiberga, however, the protests are part of the “political circus” surrounding the refugee issue in Latvia, which has little to do with integration issues, economics or humanitarian concerns, but simply a means for politicians to pursue their narrow political interests.

It would be embarrassing, Vike-Freiberga noted, speaking on national television on the morning of the protests, should Latvia struggle even slightly with accommodating and integrating such a small number of refugees.

“If we say that we are not able to ensure accommodation to such a small number of refugees and integrate them in our society, then Latvia would sign a certificate of poverty, discrediting itself morally,” she said.