An Analysis of the Estonian banking sector 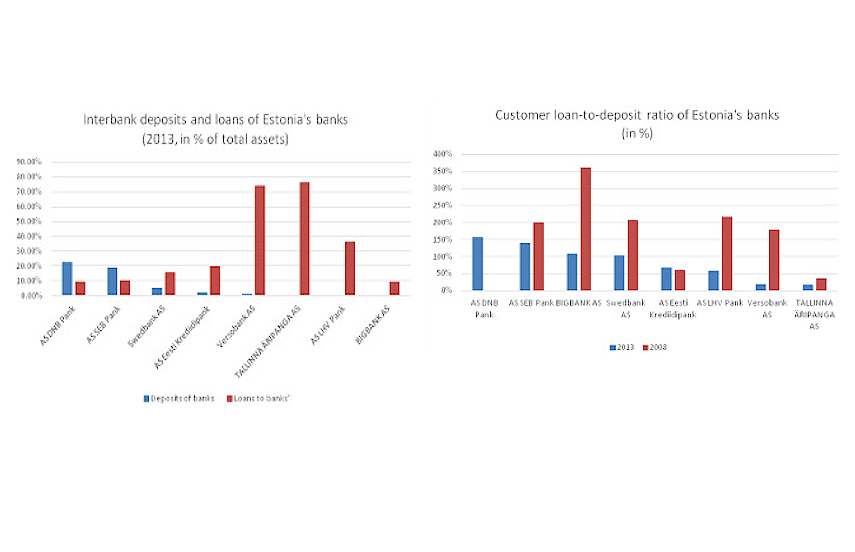 The Estonian banking sector is not large: 15 billion euros of assets altogether in 2013. There are 8 banks licensed by the Finance Inspection and 6 of them are classified as small banks. The market is mainly dominated by those medium-sized Banks whereas the share of small-sized Banks in terms of assets is 12%. The stylized fact typically observed in the European data, namely that small Banks focus on standard commercial Banking activity is not corroborated by the Estonian data. Indeed, in the Estonian market, medium-sized Banks seem to focus on standard commercial activities whereas smaller Banks tend to lend less as a fraction of the balance sheet and invest more in financial assets for trading purposes. Concerning the funding structures and the observed leverage ratios, they are broadly in line with the European benchmark.

Asset Allocation and Income models
In order to have a closer look at Estonian banks’ asset structures and income models we analyze the data on customer loans activity, the ratio of assets held for trading activity as well as the exposure to derivative products. The first Exhibit indicates the Customer loan-to-deposits ratios of Estonian Banks. Note that, all, except two small banks exhibit ratios of more than 50%. Notably, market leaders such as Swedbank (68%) and SEB Bank(86%), together with DNB Bank and BIGBANK exhibit high customer loan ratios implying the concentration on the  traditional banking Business Model. Given the comparably high loan ratios of Estonian banks, investment banking plays a minor role in their activities.

In fact, only two out of 8 banks hold more than 5% of assets for trading activities on their balance sheets: Eesti Krediidipank (11%) and LHV Bank(12%). The notional amount of derivatives for all Banks is below 1 percent. Those indicators are thus relatively low if we compare with the 10 largest European banks, as the latter hold more than 20% assets for trading. The notional amount of derivatives outstanding as a percentage of total assets ranges from 3000% to 0% for large European banks. Market leaders such as Swedbank and SEB Bank hold less than 1% and 3% trading assets respectively.

For large European banks, there is an interesting relationship between amount of trading assets on the balance sheet and the amount of risk-weighted assets. Typically, high amounts of trading assets and low volumes of risk-weighted assets are observed. This seems to indicate that large European Banks are relatively conservative in the credit risks they take, but try to increase profitability through their investments in the trading book.   For Estonian Banks, however, the consolidated data on the evolution of assets for small and medium banks shows that the share of basic lending activity in recent years has not diminished, contrary to the European data. For medium Banks the proportion of customer loans has remained at the same levels since 2011 and for small Banks this ratio has even been increasing since 2010. Actually, the Estonian banking market seems to have recovered from the crisis relatively well.

Banks’ Liabilities and Funding ratios
The bank’s capital and funding structure indicates banks’ readiness to cope with external financial risks. It is also useful to analyze the Banks’ respective Business Models. The ratio of Equity in the Balance sheet is an indicator of the level of leverage. The amount of Equity is subject to two countervailing effects. On the one hand, Equity is costly for the management, on the other hand it acts like a buffer under stress situations. In Estonia, the equity funding for banks ranges from 7% to 22% of total assets. This implies that the funding base of Estonian banks is relatively stable. Estonian banks also exhibit relative homogeneity in their customer deposit ratios. They are at high levels and range from 58% to 89% of total assets.  Smaller Banks have slightly higher deposit ratios, but overall all Estonian banks have higher deposit taking activity indicators than the benchmark of large European banks, typically between 20% and 60% of total assets.

The efficiency in transforming deposits into loans is analyzed through the loan-to-deposit ratio. The data shows significant variation among Estonian banks: from 18% to 158%. This leads to an interesting observation, namely that banks with the lowest consumer lending activity have the highest deposits from customers. Due to this mismatch, some of the loan-to-deposit ratios are quite low. For example, we see that Versobank AS and Tallinna Äripanga AS had the lowest customer loans exposures and at the same time, they were among most active deposit takers. At the same time, the examples of Scandinavian banks and Bigbank AS show the loan-to-deposit ratios above 100%. It means that they lend more than a euro for every euro they bring in as deposits. A good benchmark of loan-to-deposit ratio is around 80-90%. Overall, it seems that the deposit market in Estonia is more homogeneous than the lending market. The lending market has been ‘occupied’ by larger banks whose lending activity compared to deposit taking seems to be excessive (European benchmark shows 60-20% of loan-to-deposit ratios).

Banks’ interbank exposures as well as balances with central banks, indicate that Banks which had the excessive customer lending relative to customer deposit taking, collect the ‘missing’ deposits from credit institutions. Whereas, Banks whose consumer lending was lower than deposit taking, lend to other credit institutions. If for the large European Banks the interbank deposit taking activity was larger than the lending, in Estonia the situation is vice versa. Smaller banks tend to have high interbank loans ratios that reach 76% of total assets. Larger banks, such as DNB Bank and SEB Bank, have solid interbank deposits ratios around 20%. From the perspective of the stability of the Estonian banking sector these funding patterns seem to be more stable. High interconnectedness through interbank lending for several smaller Estonian banks would probably not have implications for the whole banking sector.

The consolidated data on the evolution of liabilities for banks in Estonia shows that the increases in liabilities during recent years correspond to the increases in customer deposits and equity (traditional banking). Thus, the concern that banks may excessively grow their funding from more risky sources, for example, trading of complex financial instruments, is not justified.

Ownership structure and organization of cross border activities
As already alluded to, the Estonian banking sector is dominated by the subsidiaries of large Scandinavian banks. Those subsidiaries are fully owned by their parent legal structures in Sweden and Norway. Usually the foreign bank in a host country operates several other entities apart from the banking business. For example, Swedbank AS and DNB Bank have subsidiaries in Estonia focusing  on leasing and insurance services. SEB Bank owns subsidiaries that deal with the car rental, asset management, data communication services and information processing. From a risk management perspective, even though risks are measured at the local Business Units,  Scandinavian banks tend to apply centralized funding models for their Baltic subsidiaries.

Apart from the large Banks’ subsidiaries there are smaller Banks with headquarters in Estonia. Those are banks with a few or no cross-border offices. In case there are, they are  often established in neighboring or closely-located states such as Latvia, Lithuania and Finland, most probably due to geographical considerations. The structures of Estonian banks’ foreign expansion differ from one bank to another. Some banks create the group’s legal entities in the host country as well f.i. BIGBANK AS, but the majority of banks incorporate their subsidiaries in the home country to manage separate business lines across several geographic regions they operate in. The group entities of Estonian small banks largely deal with real estate management. On top of that, there are various group entities dealing with leasing, asset management, agricultural production, debt collection, and hire purchase services. This variety of activities of small banks possibly is the result of high dominance of the market by large subsidiaries that push smaller banks to specialize.

There is high level of institutional ownership of Estonian-based banks. All except one Bank has majority shareholders that are institutional investors. Two of these majority shareholders are of non-European origin. For the majority of small banks the shareholders are also involved in the management through the Council or the Board of the Bank. This is important as institutional owners have higher incentives to monitor and control the entity. Overall, the ownership of Estonia’s banks is highly concentrated. On the one hand, the largest banks are owned by their Scandinavian parent banks. On the other hand, the smaller domestic banks have majority institutional and private shareholders. Due to the high dominance of large banks, the smaller ones have created various non-banking related group entities for different business lines. The scope of cross-border activities is not broad, mainly oriented to neighboring or closely-located countries since the geographical proximity is very useful in daily management of the business.

Alina Rekena is a consultant at SLF Specialists in Law and Finance.