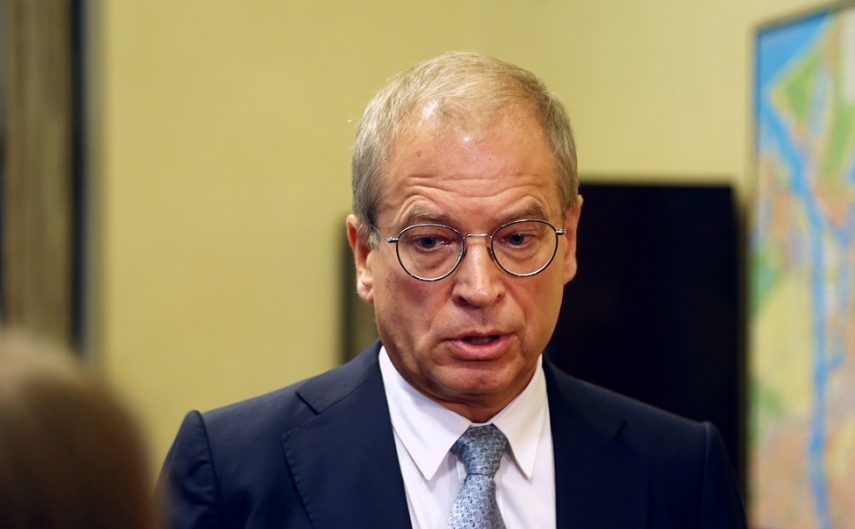 Ameriks announced his decision to journalists on Monday.

After resigning as Riga vice mayor, Ameriks will still remain a member of the Riga City Council.

Ameriks has been holding the office of Riga vice mayor since 2010.

In his words, any politician can be faced with a situation where reputation becomes the main issue. “I do not want to make excuses for what I have not done,” Ameriks said, adding that he wanted to give facts in the situation where “hypotheses and assumptions have become like unquestionable evidence”.

According to media reports, law enforcement officers have searched Ameriks’ home, but he has refused to give any comments about this matter, maintaining that his conscience was clean. “I am repeating - I even have no idea about these procurement deals, it’s not my sphere,” Ameriks told TV3 commercial TV channel.

Ameriks claimed he had never met Igors Volkinsteins, director of the Rigas Satiksme infrastructure development department, who has been put under arrest in connection to the corruption case. However, Ameriks admitted he was acquainted with businessman Maris Martinsons who has also been remanded in custody as part of the corruption probe.

Aleksandrs Krjaceks, another businessman arrested in this case, is a member in Ameriks’ GKR party and has donated over EUR 70,000 to the party in the past six years.

Ameriks said he was distancing himself from Krjaceks and promised to expel him from the party this week.

Ameriks believes that the fact that he knows Martinsons personally is the reason for all suspicions against him. “I have never been involved in any unlawful dealings since I know him, nor have I aided such activities,” the politician said. He is confident the investigation will prove his innocence.

Ameriks said that he purchased the bonds that are being mentioned as the main evidence implicating him in the corruption scandal through a bank and that anyone in Latvia or elsewhere could have bought them as well. All his transactions were declared in his public official’s asset statement in which “no supervisory or law enforcement authority had ever found any irregularity”.

“I can only repeat that I have not been linked to the Rigas Satiksme tenders and the company’s unlawful dealings investigated by the Corruption Prevention Bureau,” Ameriks said.

He also believes that in the situation where investigators are probing particular violations in the Riga City Council, the reputation of the city council and his GKR party is under threat.

GKR will nominate another candidate for Riga vice mayor in the next few days, Ameriks said. He refused to answer journalists’ questions and left the press briefing.

As reported, the Corruption Prevention Bureau (KNAB) has started a criminal investigation into suspected bribery and money laundering in

As reported, the criminal probe started by the Corruption Prevention Bureau (KNAB) against Rigas Satiksme is related to three tenders organized by the municipal transport company. KNAB representatives said that the bureau’s investigators are probing suspected bribery and money laundering in connection with these three Rigas Satiksme tenders.

One of these tenders was organized in 2016 to purchase low-deck trams for EUR 62,597,477, KNAB representatives said. Information from BNS Archive shows that the tender to supply the 20 tram cars to Rigas Satiksme was awarded to the Czech company Skoda Transportation.

The third tender, organized in 2013, was about the rights to supply 175 new passenger buses to Rigas Satiksme for EUR 75,808,297. The tender was won by Poland’s Solaris Bus&Coach company, which is expected to deliver the last buses in 2019.

The KNAB representatives added that the Latvian anti-corruption bureau started cooperating with foreign colleagues on this investigation slightly more than a year ago when KNAB informed Poland’s anti-corruption agency (CBA) and other partner services about particular persons’ possibly unlawful activities. The services took coordinated action to check the facts.