Aluksne Banitis Station: an exhibition as a virtual journey through space and time 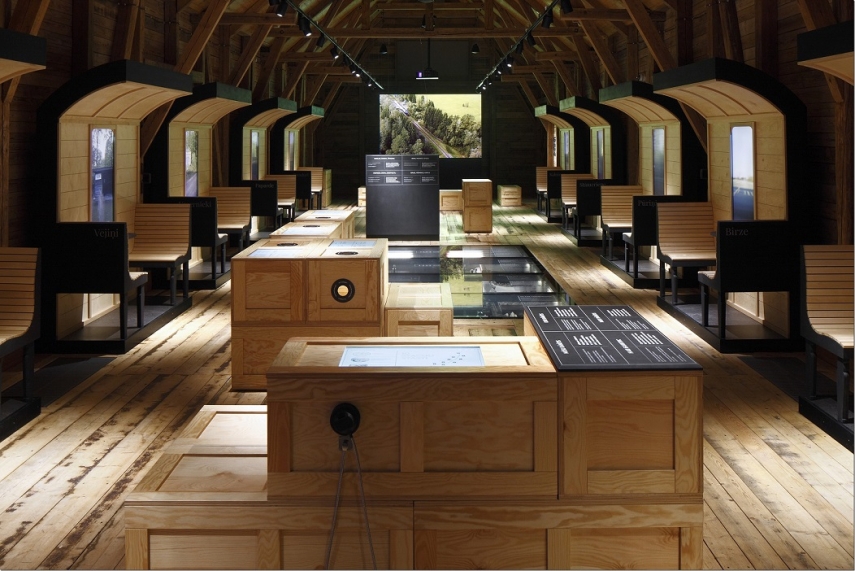 LATVIA - A new exhibition has been created in Latvia about a unique narrow gauge railway line that is not only significant in the context of European railway history, but is still operating today. Installed in what was once a baggage repository, the exhibition has
been created as a virtual journey in which visitors are offered the chance to sample an all-encompassing spatial, visual and sensory experience through sight, hearing and smell.

The exhibition was conceived by Latvia’s leading design studio H2E and it was opened in the autumn of 2018.

The exhibition’s design generates associations with travelling in a moving railcar. The impression of movement was achieved in practice through a combination of spatial layout, the use of multimedia and the dynamic composition of sound and lighting. In
the historical building around the perimeter along the wall, 10 improvised passenger benches are located and on monitors that are integrated into the railcar windows, passengers can observe the slowly moving surrounding landscape. Video footage is augmented by local residents’ stories about the little train “Banitis” that rolls along the railway line, conjuring up an all-encompassing pictorial narrative of important historical and local events as well as technical details of trains and rail transport.

Referencing the building’s original function, wooden baggage boxes are used to position exhibits, which now store information instead of freight. The contents of the baggage boxes vary – some have monitors or graphic boards integrated into them,
whereas others contain authentic exhibits. To make the acquisition of information interactive, exhibits can only be viewed by peering into a box through a round hole. An inclusive engaging experience for visitors is provided by 3D virtual reality that allows them to see the world through the train driver’s eyes and to acquire knowledge about the most important technical features of the engine that propel the train into motion.

During the graphic identity development stage, historical materials such as typefaces, tickets, trademarks and other station documents were studied and reinterpreted in new graphic language. For obvious reasons, we chose to emphasise a graphic black
and white line. The light blue tone used in the graphic works was adapted from historical train timetables. Its lightness is synonymous with the freedom that accompanied the advent of railway transport.

Inguna Elere, Creative Lead of H2E: “The goal of the exhibition design was to create an illusion of movement in a stationary space. The virtual journey tells the story about the history of the railway and its technical aspects, which would highlight the importance of local industrial heritage in the context of broader transport history. However, the most pressing concern was to achieve a balance between the use of digital and analogue communication media, in order to make it easier for visitors to perceive the overall message.”

In the first few months after it was opened to the public, the exhibition has significantly increased tourism in the region, as well as increasing public interest in industrial heritage and strengthening local patriotism.