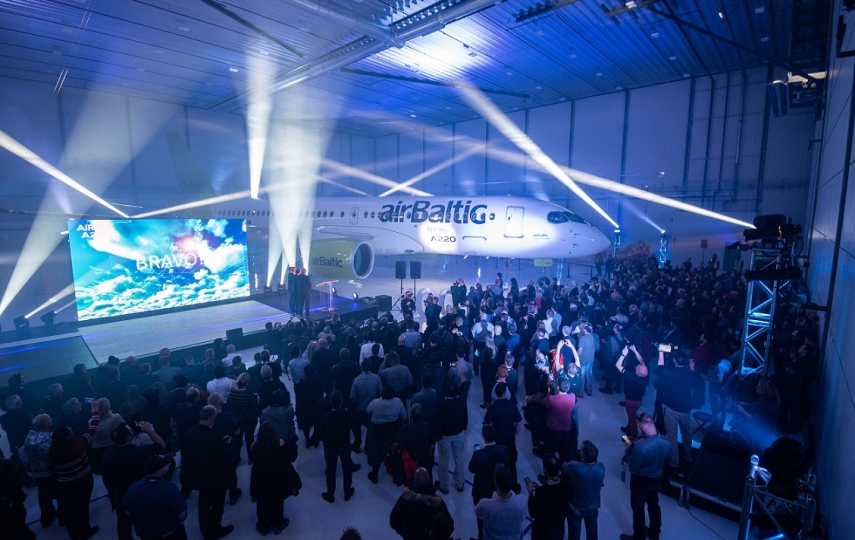 MONTREAL - Latvian airline airBaltic on November 28, 2019, at the Airbus aircraft programme’s headquarters in Mirabel, Canada celebrated its 21 st Airbus A220-300 jet, registered as YL-AAU in an improved livery. The 21 st aircraft for airBaltic marks the next phase in the airBaltic fleet modernization plan. From now on, all the company's new aircraft will have greener tails, thus emphasizing airBaltic's commitment to becoming a more sustainable airline operating one of the greenest fleets and launching other sustainability initiatives in the near future.

Martin Gauss, Chief Executive Officer of airBaltic: “We are truly proud to be the launch operator of the Airbus A220-300 aircraft which, being an integral part of airBaltic’s fleet over the last three years has demonstrated an outstanding performance. To introduce this aircraft was a forward-thinking decision that has most certainly paid off as A220 family aircraft are not only considerably more fuel-efficient and environmentally friendly, but also more convenient for both passengers and staff. The vision of an all- Airbus A220 fleet by 2023 is the backbone of airBaltic’s Destination 2025 business plan and the celebration of our 21 st A220-300 aircraft from the newest order marks another step towards the set aim.”

The 21 st Airbus A220-300 is the 100 th manufactured aircraft of this type thus in the honour of this milestone a special ceremony took place yesterday at the Airbus aircraft programme’s headquarters in Mirabel, Canada gathering Airbus and airBaltic representatives, partners and media.

As informed previously, airBaltic aims to minimize complexity and benefit from the additional efficiency of the Airbus A220-300 aircraft, which will be the only jet type operated by airBaltic by the end of 2022.

airBaltic (AIR BALTIC CORPORATION) is the most punctual airline in Europe connecting the Baltic region with over 70 destinations in Europe, the Middle East, and the CIS. airBaltic is a joint stock company that was established in 1995. Its primary shareholder is the Latvian state, which holds around 80% of the stock, while Lars Thuesen holds around 20% through his fully-owned Aircraft Leasing 1 SIA. The airBaltic fleet consists of 37 aircraft – 20 Airbus A220-300s, 5 Boeing 737s and 12 Bombardier Q400Next Gen aircraft. airBaltic has received numerous international awards for excellence and innovative services. In 2017, the airline received the CAPA Regional Airline of the Year award, while in 2018 airBaltic received the ATW Airline Industry Achievement Award as the Market Leader of the Year. In addition, in 2019 airBaltic received Sector Leadership Award by Airline Business. airBaltic achieved the best on-time performance globally in 2014, 2015, 2016, 2017.