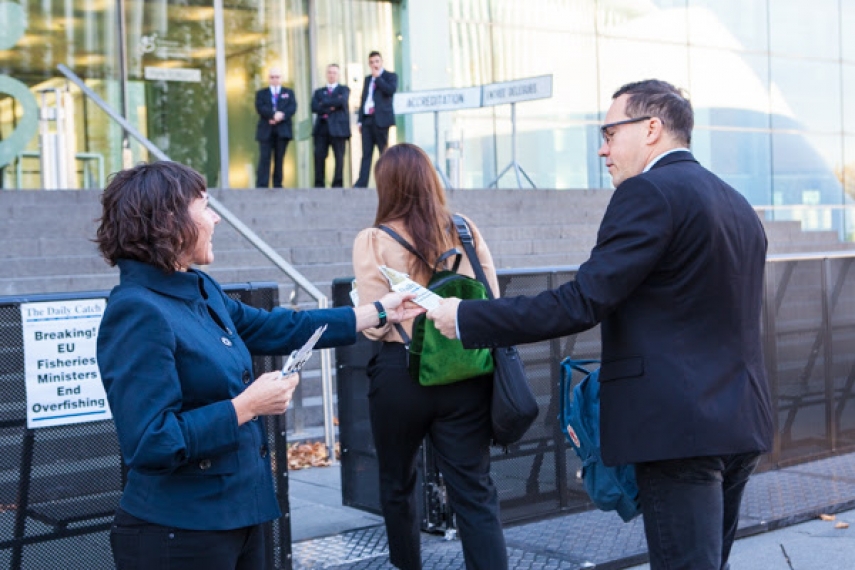 LUXEMBOURG – As the annual AGRIFISH meeting opened this morning in Luxembourg, EU Member State delegates were greeted by an Our Fish fishmonger who offered them a chocolate herring, wrapped in a special edition of the satirical Daily Catch newspaper, in return for their commitment to end overfishing of Baltic fish stocks.

“EU fisheries ministers continue to receive the best available scientific advice for conservation of Baltic fish stocks, gift-wrapped - yet to date, they have ignored this advice and just kept on overfishing”, said Our Fish Programme Director Rebecca Hubbard. “With just one year until the final 2020 deadline to end EU overfishing, today’s AGRIFISH meeting is crucial to determining if fisheries ministers are serious about putting the future health of Baltic fisheries and communities ahead of short term profits and political interests”.

“Herring is an iconic cultural fish for the Baltic’s EU Member States, such as Denmark and Germany, yet catches are a fraction of their former size, and stocks are in such poor health that the International Council for the Exploration of the Sea (ICES) has advised zero catch. Without urgent action from fisheries ministers, the herring fishery cannot rebuild”, she continued. “EU Fisheries ministers have a duty to respect natural limits and return these stocks to healthy and profitable states”.

“Despite hopes that one strong year class will power its recovery, Western Baltic cod remains at its lowest levels in history, so it is crucial that Ministers do not jump the gun by setting fishing limits too high again this year. They must not waste this opportunity, and instead protect this new recruitment, so that it can truly benefit both the stock and Baltic fishers in the future”, said Hubbard.

‘Despite EU Commission promises to end overfishing in EU waters, it has inexplicably proposed fishing limits far above scientific advice for Eastern Baltic cod - an iconic fish stock that has been struggling from overfishing and poor environmental conditions for years. The most simple thing Member States can do to help eastern Baltic cod - especially countries with the largest shares of quota, such as Denmark, Poland and Sweden - is to follow the science when setting the fishing limits”, commented Hubbard.

In October 2017, ministers set four out of ten fishing limits above the advised maximum sustainable levels – so 40% Baltic and Atlantic fish stocks continue to be overfished.

Independent indicators also suggest that 10.1 million Western and Eastern Baltic cod were illegally discarded and not counted towards catches in 2017. For eastern Baltic cod in 2017 - scientists estimate that just 1/17 of all unwanted undersize catches were landed and recorded (compared to what was actually discarded).

“It is unacceptable for EU governments to turn their heads away from the widespread unreported and illegal fishing activity taking place in the Baltic Sea. It is time for ministers to put aside the pressure of short term profits, and instead show leadership by setting fishing limits in line with scientific advice, and ensuring industry practices follow the law. Nothing less is required to rebuild and preserve Baltic fish stocks for the benefit of all Baltic and EU citizens, and to secure sustainable coastal communities, by 2020,” concluded Hubbard.