A fond farewell to the litas - but clear off, Farage! 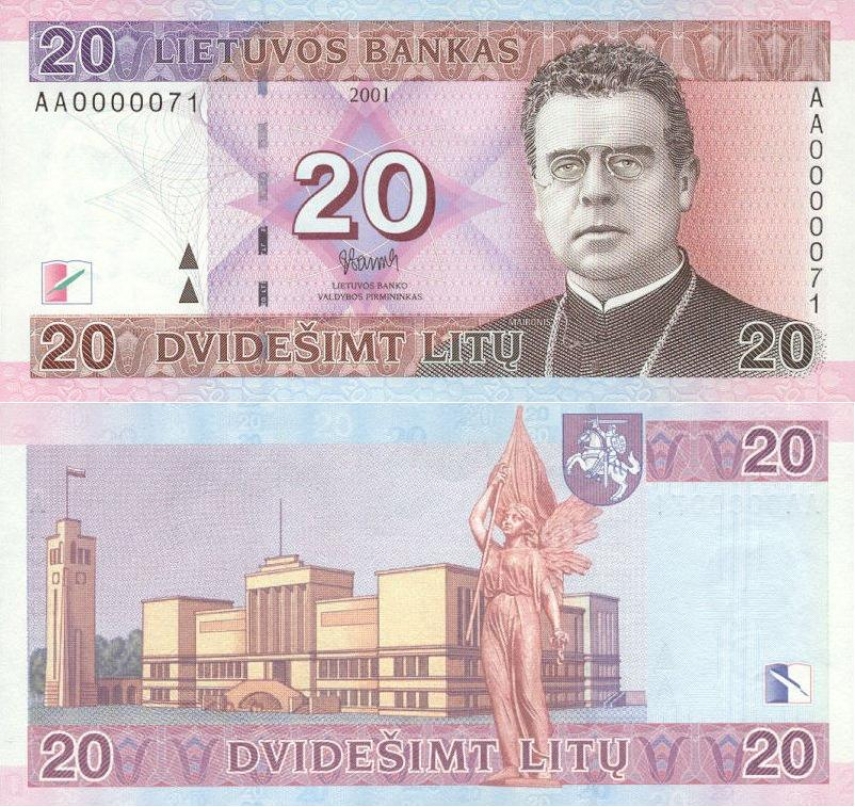 At the stroke of midnight on New Year’s Day 2015 the bell will toll, heralding the start of a new year and a new era for Lithuania. Yet the fireworks and jubilation will play out against a backdrop of sadness as Lithuania’s national currency, the litas, dies a death.

It will all be very dignified, of course, meticulously planned and executed like a mercy killing in a Swiss euthanasia clinic. The litas will bow out with dignity and grace as the euro comes in, promising to make Lithuania a part of something bigger.

The main advantage of euro adoption will be greater economic stability and ease of trading. But there is more to it than that. There is also an element of belonging to the “club” that is the EU. Adopting the euro currency is seen as a key indicator of “Europeanness”, and as a game of catch-up with the other two Baltic states, which have already joined the Eurozone.

Seeing as the litas is still an active currency for another two weeks, it may be premature to eulogise. But I think it is worth mentioning at this point that the litas has an interesting, if not chequered, history. On more than one occasion the introduction of the litas has symbolised the end of a period of suffering at the hands of foreign occupying forces. First introduced in 1922, the litas replaced the ostmark (or “auksinas”) that was introduced by German forces during WWI. It survived until April 1941 when it was replaced by the Soviet ruble.

Yet the ruble left with the Soviet Union, and Lithuania’s independence in 1991 saw the introduction of a new currency to mark a new chapter in the nation’s history — the talonas. But the talonas turned out to be easily-counterfeited “monopoly money”. Its life as a currency was short-lived and those turbulent times were calmed by the proud return of the litas. Now, some 92 years after its first introduction, the litas is being withdrawn from use.

Lithuanians, broadly speaking, welcome the adoption of the euro as a sign of progress, and it is interesting to note how this sharply contrasts with attitudes in Great Britain, where I have been living for a number of years. Brits tend to baulk at the idea of being part of a single currency. For them it’s very much a question of “God save our queen, and God save our pound!” This begs three questions: is a country’s cultural identity tied up with its currency? Has, for example, France become any less “French” since adopting the euro? Or did the Netherlands, for instance, fizzle into oblivion along with the demise of the guilder?

The simple answer, to all three questions, is no. The identity of a country is held largely in collective spirit, language, culture and attitude, on which the banknotes and coins in one’s wallet have little bearing. A currency is merely a token with which to make a transaction.

So why are Brits so scared of the euro? Why is scepticism of the EU still such a strong force there? And should this be any cause for concern in Lithuania? Again, the answer is no: the Brits could ditch the pound tomorrow and everything would be entirely alright for them, as it will be when Lithuania joins the eurozone next month. But Brits have a different concept of Europeanness that alters their view. Their culture contains an island mentality and they talk of “Europe” as though it is over there, somewhere else, when in fact their nation first joined the European Economic Community, the precursor to the EU, over 40 years ago.

Nigel Farage, the leader of Britain’s foremost anti-EU party, is attempting to position himself as the champion of this island mentality. It never fails to amuse and irritate me when I read articles about Farage in the eurosceptic British tabloid, the Daily Express. The paper plays up to this image, making him into some grotesque but magnetic caricature, almost always showing him pulling faces like Mr Bean, his mouth gaping open like a crocodile as he receives the slavering adulation of those who believe he is “on their side,” and that he will save Britain from a perceived invasion of foreigners.

But they would be misguided to think so. The man is an unscrupulous, manipulative opportunist. Even his clothes betray him as a fake: a former city slicker masquerading in as an honest farmer in a tweed suit, all to evoke a combined sense of nostalgia and pride. It’s a natty little image though, one that chimes with the UK’s working-classes, who seem to be soaking up his anti-EU schtick like a sponge absorbing dirty bath water.

Yet there’s no chance anyone with any sense in Lithuania thought Farage was “on their side” when he visited Vilnius last weekend. He was speaking at a congress put on by the Order and Justice Party, a small anti-EU party in Lithuania that Farage is obviously looking to keep on good terms with — just so he can cause more mischief in Brussels, no doubt (while, at the same time, pocketing a hefty salary for being an MEP).

Farage even had the nerve, while he was in Vilnius, to weigh in on a decision that is entirely in the hands of Lithuanians: the decision to join the euro, claiming he was “astonished” that Lithuania would be joining the eurozone, calling it a “short term temptation.” He slammed the idea of Lithuania joining a “bigger club”, casting doubt on future investments coming to Lithuania while warning Lithuanians they are entering "a full economic and monetary union with Greece, Italy, Portugal, Spain and Cyprus.”

I have to admit: I do feel a touch of grieving for the litas, but certainly not because of Farage or any of his trumped-up arguments, crocodile smiles or tweed suits. I feel a pang of sadness, of loss, even in the twilight before its demise, and I can’t easily explain why.

One thing I am certain of is that its symbolic value and legacy as “the currency of peace” will live on. Hopefully Lithuania won’t change too much. It is great as the quirky little place it is. So goodbye, my dear litas. Luckily our language will still be there, as will be the lovely trees, the meandering rivers and verdant, beautiful nature. And luckily Farage has now cleared off.

The writer is a European journalist and broadcaster with a special focus on British, French and Lithuanian culture, news and current affairs.