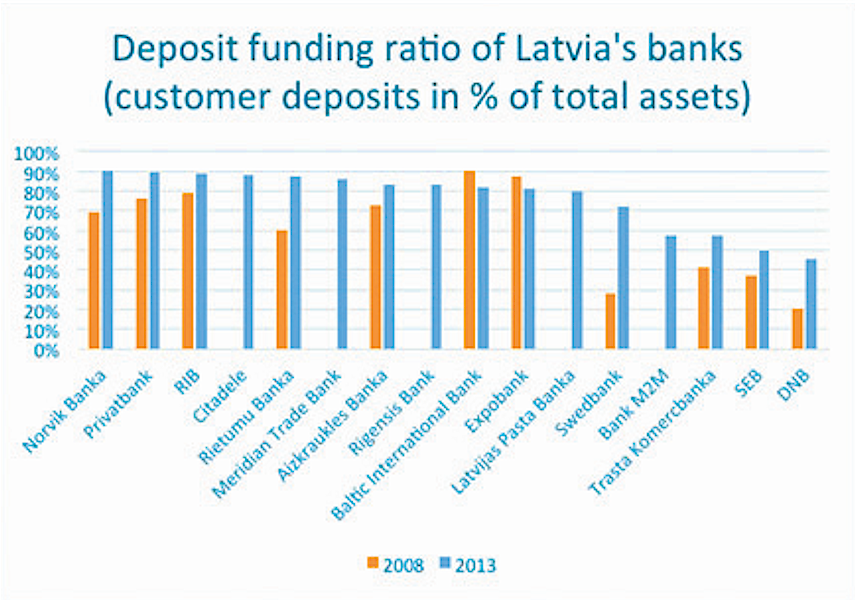 RIGA - In our last article in the November issue, we provided a first very broad introduction to the Latvian Banking Sector by analyzing the balance sheets of 17 Latvian banks. We pointed out that bank business models are not exclusively characterized by the size of the bank, the bank’s customer base, asset structure and income model, but also by the capital and funding structure, the governance and legal structure as well as the way cross-border operations are organized. In this article, we will focus on the latter characteristics.

Significant variation in capital and funding
Latvia’s banks seem to exhibit different capital and funding structures than most European banks. If we focus on core equity capital, for European banks the proportion ranges from 2% to 8% as a fraction of total assets. The ratio is a broad measure of leverage. In Latvia, those ratios are much higher with a much bigger dispersion. Indeed, as the Exhibit 1 indicates, the ratios vary from 5% to 36%. In a sense, this might be good news in terms of stability of the financial sector. From another viewpoint, however, equity capital is costly and a high ratio of equity might entail low return on equity, a major performance indicator for investors. Even though the appropriate level of equity capital depends on the riskiness of each individual bank, namely the risk weighted assets, some ratios are astonishingly high. Overall, the high equity capital for Latvia’s banks seems to indicate that the banks’ funding base is more stable.

The ratio of customer funding as a fraction of total assets is another major determinant of the funding structure. European studies indicate that this ratio varies from 60% to 20% for large European Banks. In Latvia, this customer deposit funding ratio is higher than for large European banks and ranges from 90% to 45%. Another indicator for discussing the banks’ funding structure is the customer loan-to-deposit ratio. In the European banking sector, this ratio ranges from 300% to 70% for large banks. A combination of prudence and regulatory requirements suggests that a loan-to-deposit ratio of around 80-90% would be a good benchmark. In Latvia, with few exceptions the majority of banks exhibit a loan-to-deposit ratio of 50% to 20%, which is less than for European banks and less than the benchmark. A ratio below 100% means that a bank lends less than a euro to customers for every euro that it brings in as deposits.

In the European banking sector the large banks also vary in the extent of their interbank exposures, measured by the share of loans to and deposits from other banks. For these banks the deposits measured in % of total assets are higher than the loans and range from 30% to 4%. In Latvia, however, the interbank exposures report different pattern which is a mirror to the customer exposures mentioned earlier. For the majority of banks, interbank deposits from other banks account for less than 6%, but loans to other banks range from 13% to 89%. This high proportion of interbank loans implies that the banks are highly interconnected and might be propitious to instability under stress situations.

Overall, the evidence indicates that banks with larger capital buffers performed better during the global financial crisis. Moreover, small banks with higher capital were more likely to survive both banking and market-related crisis. As previously outlined, Latvia’s banks seem to follow the standard commercial banking model. Their capital and funding structure is different from large European banks due to difference in size, customer base, asset structure and income model. In Latvia banks seem to be more cautious in their funding strategies: they hold more equity capital, higher deposits and less customer lending on their balance sheets than large European banks.

Ownership concentration
Although being long and detailed, banks’ financial disclosures often do not provide a clear picture of their liquidity and solvency situation, profitability drivers, robustness and resilience. In the European Banking sector the ownership of banks’ shares tends to be very dispersed both in their degree of blocked ownership (where shares are held by clients or other interested parties) as well as in their degree of institutional shareholder ownership. Therefore, the ability and incentives for shareholders to monitor the large European banks is limited. Moreover, because of the explicit as well as implicit guarantee of deposits, the complexity and opacity of banks’ activities, depositors and other bank creditors also have limited incentives to monitor the banks. This lack of external monitoring gives rise to an agency problem, which allows bank managers to act in their own interest that is not necessarily in the interest of the owners or other investors of the bank.

Of the sample of Latvia’s banks considered here, there are two banks with a public ownership structure and several banks, the largest ones, are fully foreign-owned subsidiaries. Overall, the bank ownership cannot be considered dispersed, as the total % owned by top 10 stakeholders constitute from 72% to 100% in all cases. The ownership structures seem to be more concentrated which means that owners have more incentives to monitor the business. The degree of institutional shareholder ownership also matters. In that respect, a fraction of the Latvian Banking sector is held by foreign institutional investors. In principle, large institutional investors have a long term view which implies a bigger stability of the sector.

Geography dictates business models
The large EU banking groups usually have a complex corporate and legal structure, in some cases including more than thousand different legal entities (direct subsidiaries), driven by regulatory and tax considerations. Due to the complexity of their organisation, it is very difficult to depict a group’s organisational structure.
As already alluded to,the Latvian banking sector is dominated by subsidiaries of large foreign banks, such as SEB, Swedbank and DNB Bank. Historically, there are different factors that influence the choice of the funding model of a bank during its foreign expansion. The two most important ones are the physical distance from home to host market and the way banks expand business lines abroad. Along those lines, centralised funding is usually established in case of market proximity and regional integration. This is the case for Scandinavian banks in the Baltics, including Latvia. While decentralised funding is chosen in case of more distant markets, such as in case of different continents.

Apart from the large foreign players, there are smaller banks and medium-sized banks headquartered in Latvia. They include specialised private banks, state-owned banks with different business lines and customers. Therefore, their cross-border business activities are typically organised very differently from one bank to another. They can, for example, be organised according to geographic areas with dedicated legal entities for each business line, or according to geographic areas, with a legal entity carrying out several different business activities, or finally,  with a legal entity carrying out a specific business activity across several geographic areas. In the  Latvian banking sector at least two of these organisational models can be observed.

For example, Latvia’s banks operate investment management subsidiaries and client service centers in other countries, or they open a representative office in foreign country which both services clients and advises on investments. However, the precise information on legal structures of banks’ entities is very limited and, as said before, they tend to be complex. Also, for complete assessment of differences across banks’ business models in Latvia, the degree of integration of the risk management of the banking group as a whole should be considered.

Foreign subsidiaries seem to follow the same principles in the organisation of their foreign business expansion. They have opened different entities for each business line apart from banking services. In Latvia, for instance, in asset management, leasing, and real estate-related services. Similarly with large EU banks, Latvian-based banks face decisions on whether to set up branches or subsidiaries in cross-border expansion which depend on several factors, including the regulation, tax, and the distance between home and the new market. Latvia’s banks choose to set up branches or representative offices rather than subsidiaries. The distance factor seems to be the decisive factor in this choice, as subsidiaries are set up in neighbouring countries such as Lithuania. However, the regulatory requirements also might play the role.

Then, it was observed during our survey that many of Latvia’s banks concentrate on Eastern , non-European, mostly CIS countries. It was observed that many representative offices of Latvian banks are situated in Russia, Kazakhstan, Tajikistan, Azerbaijan, also Ukraine, and others. Moreover, several banks target their cross border activities solely to the CIS markets, among them being large banks such as ABLV and Rietumu, as well as TKB. Another feature is that the shareholders of several Latvian banks are Russian citizens (Bank M2M Europe, Expobank, Rigensis). Providing banking services to non-European residents seem to constitute substantial part of business for Latvia’s banks.

To close this discussion, it seems that all those results indicate apart from specific cases, the Banking sector in Latvia seems relatively stable compared to other European countries that were highlighted as risk countries. We expect that the Latvian Banking market is on a way to further sophistication of its Business Models.