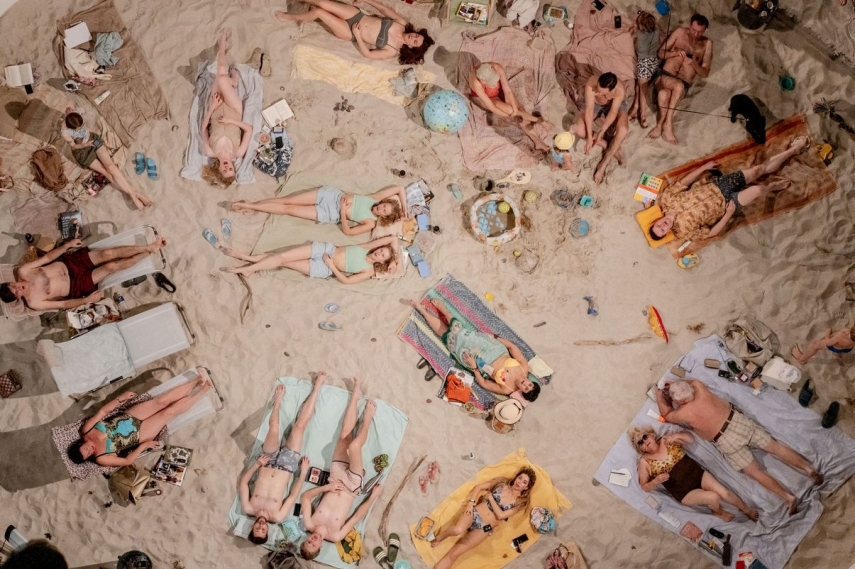 Sun & Sea, the opera-performance that stunned audiences at the 2019 Venice Biennale, and received the top award, the Golden Lion, returns to its native Lithuania on 8–11 December. Created by the three Lithuanian artists Rugilė Barzdžiukaitė, Vaiva Grainytė, and Lina Lapelytė, the work will be held in Lithuanian and, exclusively on the 8th of December, in English. These particular shows will be sung by an international troupe of performers, with whom Sun & Sea has toured over 25 cities in 18 countries in the past three years.

The opera-performance is staged on an artificial beach which will pop up in the former Vilnius taxi park. The exclusive venue with an 8-storey spiral ramp driveway will let the audience move along and observe the view from a solar perspective above the stage in different scales – like zooming in or out.

The setting – a crowded summertime beach, created by the director Rugilė Barzdžiukaitė – conveys an image of laziness and lightness. Holidaymakers dressed in brightly coloured bathing suits lie under the artificial sun, building sand castles, reading books, playing games, having snacks, and singing their stories subtly written by the librettist Vaiva Grainytė. As these multiply, everyday micro-events slowly give rise to broader, more distributed anxieties related to the planetary anthropogenic climate change. Themes of corporeality and universal fatigue of the human and the planet unfold in the work in a captivating and mildly ironic way, intensified by an unsettling soundtrack by the composer Lina Lapelytė. In this context, the message follows suit: contemporary crises unfold easily, softly – like a pop song on the very last day on Earth.

Curated by Lucia Pietroiusti, founder of the General Ecology project at Serpentine, the work has toured the world. Notable presentations include BAM (New York), MOCA (Los Angeles), Teatro Argentina (Rome), LIFT festival (London), as well as presentations at E-WERK (Luckenwald), Kiasma (Helsinki) and others. The New York Times hailed the piece as “the greatest achievement in performance of the last 10 years” and Time Out London called it “a heartbreakingly beautiful elegy for our relationship with the planet”.

This is the second collaboration for the three artists, after the opera Have a Good Day!. Sun & Sea piece was originally presented in its first English-language, durational-performance version as Sun & Sea (Marina), the Lithuanian Pavilion at the 58th International Venice Biennale, and was awarded the Golden Lion for Best National Participation.