“The Flower of the Sun” 2019 announced all awards 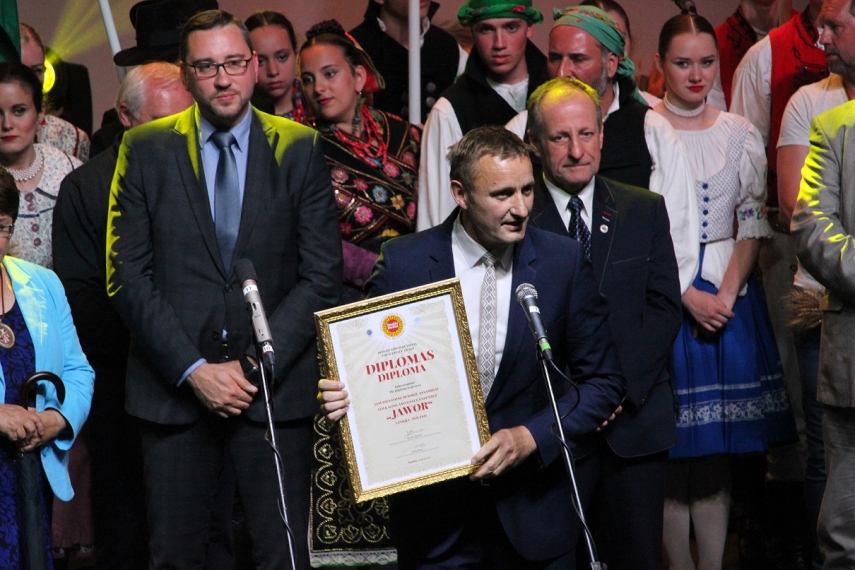 In the evening of the 7th of July, a large crowd of people gathered in Šiauliai concert hall “Saulė” (meaning “the sun” in Lithuanian) to take part in the finalising concert of one of the largest folk festivals in Lithuania, “The Flower of the Sun”. The winners of the “Grand Prix” were announced. This year the ensemble from Spain, “Don Sancho”, was awarded the “Grand Prix”.

“The Spanish performers demonstrated their excellence in various categories of the contest, also were very active in workshops and other events throughout the entire festival, created a good atmosphere and enshrine their traditions,”– these were the impressions of the art director of the contest-festival, Darius Daknys.

This folk ensemble represents folklore of the country’s regions Zamora and Castile at national and international festivals, has been awarded for the sound, authenticity, diversity and quality of national costumes, the energy demonstrated on stage. Since the founding of the ensemble in 1994, it has taught traditional culture to over 1500 people who participated in various workshops, courses, presentations and the Traditional Dance School in Zamora. Moreover, this association has accumulated one of the best collections of traditional clothes of the West of Castile and León region, which comprises original exhibits of the 19th and 20th centuries.

In its home country, the ensemble arranged all Zamora international folk festivals. In collaboration with the Ethnographic Museum of Castile and León, it also organises periodical seminars on the traditional culture related to various aspects of the popular culture studies.

An ethnomusicologist, associate professor Zita Kelmickaitė also ascended the stage; she awarded the ensemble “Monte Verde” from Madeira, Portugal, with a Special Prize for Enshrining the Traditions. Z. Kelmickaitė gave a Baltic psaltery handmade by an artist Egidijus Virbaitis to the performers, emphasising the development and preservation of traditions and authenticity. A special prize was also awarded by a Chair of the Jury, ethnomusicologist Dr Loreta Sungailienė. The colourful folk ensemble „Shrusti Performing Arts“ from India were awarded by L. Sungailienė with an instrument – a horn – handmade by a folk artist Albertas Martinaitis from Šiauliai. Moreover, a Mayor of Šiauliai City, Artūras Visockas, also ascended the stage to congratulate and award the Audience Prize. It went to an ensemble “Jawor” from Poland.

The member of the jury, Gabriel Frontera Mestre from Spain, was delighted with the interest in folklore that was demonstrated by Šiauliai citizens. “Unbelievable, how many people gathered to watch not the pop art but folklore,” – said the guest from Spain addressing the audience from the stage. According to him, it was a difficult task to assess the participants of the contest because all of them were worth being awarded.

The third place in the category of stylised folklore was taken by an ensemble from Serbia „Djido“. The second prize went to the Chilean ensemble. The first place brought much joy to the ensemble “Jawor” from Poland. In the next category dedicated to the groups of traditional folk dances, the third prize went to a Spanish ensemble “Don Sancho”. The second prize was awarded to energetic Hungarian performers of “Muzsla”. An ensemble from Portugal, “Monte Verde,” came to be the best in this category.