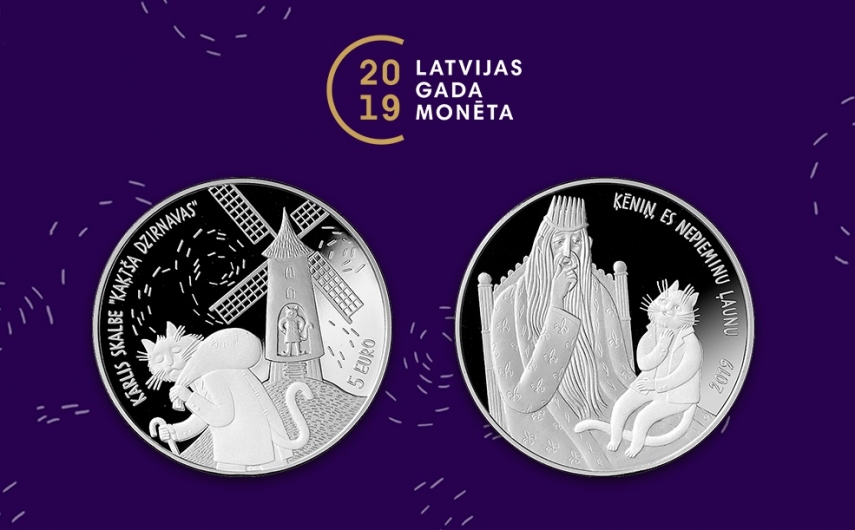 The collector coin "Cat's Mill" dedicated to the literary work of the Latvian poet, prose-writer and politician Kārlis Skalbe (1879–1945) has been voted Latvia's Coin of the Year 2019 in the traditional public vote.

Overall, the public vote organised by Latvijas Banka and the news portal "Delfi.lv" received nearly 6000 votes, including about 2200 votes cast in favour of the coin "Cat's Mill".

The graphic design of the collector coin "Cat's Mill" has been created by Elīna Brasliņa, whereas the author of the plaster model is Ligita Franckeviča. This has been the young and talented Elīna Brasliņa's debut in coin art. She is publicly known as a book illustrator: more than 20 children's books with Elīna Brasliņa's illustrations, including the "Art Detectives" series, have already been published. Her first animated film "Jacob, Mimmi and the Talking Dogs" has also been recently released to the cinemas.

The coin features the Cat, Black Cat and King – the characters of the fairy tale "Cat's Mill" contained in Kārlis Skalbe's collection "Winter Tales" (1913) that has been included in the Latvian Cultural Canon. The moral of the fairy tale is: do not spread evil and learn to forgive. Other values taught by this fairy tale are honesty, diligence and love. The fairy tale's multi-faceted message is useful at any age. The coin has been struck by UAB Lietuvos monetų kalykla (Lithuania).

"It is symbolic that we announce the coin of 2019 in these globally challenging times when universal human values, including empathy, care for those in need of help, readiness to make sacrifices for the common good, once again come to the fore. Fairy tales by Kārlis Skalbe contain a moral code which, deeply rooted in the consciousness of our nation, helps and invigorates people in hard times," stresses Jānis Blūms, Chairman of the Coin Design Commission of Latvijas Banka and Head of the Cash Department of Latvijas Banka.

This year, too, the expert commission of the Latvian National Museum of Art (LNMM), composed of Māra Lāce, LNMM Director, Inese Baranovska, Head of the Decorative Art and Design Department, and Elita Ansone, Head of Collections and Scientific Research Department, have selected the most outstanding coin in terms of artistic solution, whereas the Culture Information Systems Centre (KISC) has announced the preference of library users.

LNNM named the silver collector coin of a specific shape dedicated to the creative heritage of Niklāvs Strunke (1894–1966), Latvian painter, graphic artist and stage designer, the most outstanding coin in terms of artistic solution. The graphic design of the collector coin "Niklāvs Strunke" has been created by artist Paulis Liepa, whereas the author of the plaster model is Ivars Drulle.

Māra Lāce, LNMM Director: "The coin features the works by Niklāvs Strunke in a laconic yet absolutely convincing way; they show his signature style in the period of classic modernism and have been included in the Latvian Cultural Canon. The composition of the round coin with a cut edge brilliantly evokes association with "Man Entering a Room" and "Self-Portrait with a Doll", the two paintings by Strunke featured on the obverse and reverse of the coin where we see impressive intensity differences of frostings used. The letter design characteristic of the style of 1920s–1930s has been used. The shape and finish of the coin, the interaction of the text and images create a laconic, powerful and impressive visuality."

The special award from KISC was awarded to the coin "Cat's Mill". Sandra Ozoliņa, Deputy Director of KISC: "We are happy that, despite the non-standard circumstances when libraries are closed to the public, many of the libraries have still found a solution and have actively invited their readers to participate in the traditional beautiful Latvia's Coin of the Year event organised by Latvijas Banka. We participate every year, in cooperation with the digital learning resource letonika.lv. The public libraries of Latvian municipalities have nominated their candidate for the most beautiful coin of the year award this year as well, and it is not a coincidence that the winning coin in a libraries vote was a coin based on a literary work – Cat's Mill.

We encourage you to read Kārlis Skalbe's fairy tale in the digital reading room at letonika.lv, because the Cat's message embodied by the coin is of a particular importance at this difficult time when the society mobilises itself to secure the victory of the good."

Out of all the registered participants in the vote for the best collector coin of 2019, twelve will receive one of the nominated coins. The list of the lucky winners will be published on www.bank.lv, and the winners will be contacted personally as to how to receive the coins.

In support of the #stayhome and #E-culture initiatives, Latvijas Banka invited the population to use the virtual activities developed within the framework of Latvia's Coin of the Year to find information on our cultural and historical values immortalized on Latvian coins.

The erudition game "Inquire about Cultural Symbols on Latvian Coins" available in the digital environment https://www.letonika.lv/article.aspx?id=moneta19 provided an opportunity to test one's knowledge about the coins issued in 2019 and the values they represent. Overall, the game was played by nearly 400 participants in 122 libraries.

Four collector coins were issued in 2019. The collector coin "Cat's Mill" encourages us to remember and read once again our favourite literary fairy tales, including the ones written by Kārlis Skalbe. The silver coin of an unusual shape "Niklāvs Strunke" invites us to dive into the art world and find out more about the life story and art of Niklāvs Strunke. The collector coin "Gifts of the Forest", created by two authors, tells a story about our traditions and the natural wealth, while the patriotic coin "Freedom Fights (1918–1920)" delivers an informative message to those interested in the history of Latvia.

Since 1993, Latvijas Banka has issued 98 lats collector coins and 35 euro collector coins, with over 50 Latvian artists having participated in designing them. The Coin Design Commission of Latvijas Banka (the former Commission for the Thematic Concept of the Banknotes and Coins), operational since 12 November 1993, plays an important role in the coin issuing process. The Commission consists of the employees of Latvijas Banka, outstanding Latvian experts of art and culture as well as artists and scientists.

Why you should be trading internationally

How Cryptocurrency Affects the Gambling Industry