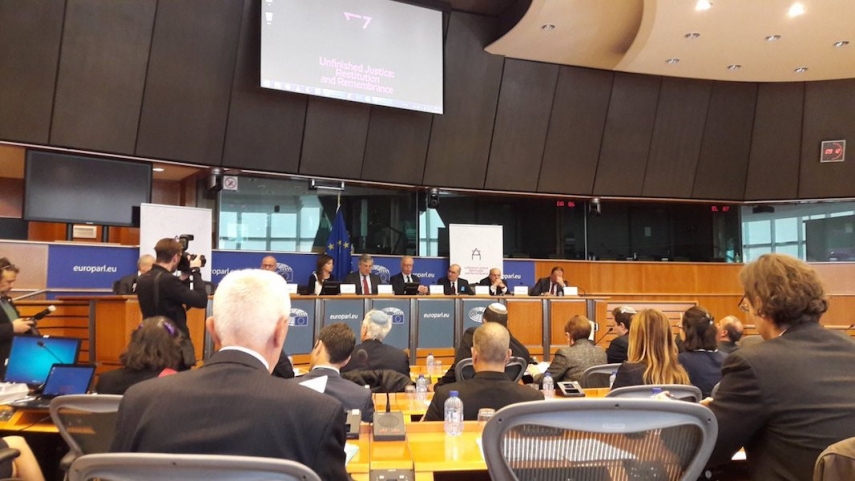 The failure of 12 countries, including Poland and Bosnia and Herzegovina, to return or compensate for Jewish property stolen during the Holocaust has been condemned in the European Parliament.

Speaking as a new report showed that Holocaust survivors are still being challenged by legal and technical problems over property confiscated more than 70 years ago, the President of the European Parliament Antonio Tajani, said: “Restitution, together with remembrance and reconciliation, is a fundamental element to restore justice after the Holocaust.”

He called on Member States authorities to assist victims and their families during the complex legal proceedings, adding; “Some countries have done a lot and have even developed best practices. Others should do more.”

President Tajani’s endorsement of a campaign to achieve justice for Holocaust survivors and their families over property came as he officially opened on April 26, 2017 an international conference, “Unfinished Justice: Restitution and Remembrance”, which examined the current state of post-Holocaust restitution in Europe.

The conference focused on the findings of a new report the Holocaust (Shoah) Immovable Property Restitution Study, published recently, which highlighted how each of the 47 countries who endorsed the 2009 Terezin Declaration on Holocaust Era Assets has responded to its commitment to return or provide compensation for land and businesses confiscated from Jewish communities and other persecuted groups during World War II.

Most states in Western Europe have largely complied with the principles of the Declaration. However, many former Communist states of Eastern Europe, notably Poland, have not yet fulfilled their Terezin Declaration obligations to enact comprehensive immovable property legislation, and a ‘substantial amount’ of property confiscated from European Jews remains unrestituted, according to the study.

This includes both pre-war Jewish private property currently in the hands of the state and private individuals or entities, and Jewish religious and communal buildings such as synagogues, clubs and social service organizations that have never been returned to the local Jewish community. The Terezin Declaration held the widely-recognised view that no state should benefit from heirless property, and that special funds should instead be allocated to needy Holocaust survivors. Yet in most countries in Eastern Europe, property that became heirless as a result of mass murder reverted to the state, and has not been returned.

There are approximately 500,000 survivors alive today, of whom it is estimated that up to half live in poverty.

According to the study, Poland and Bosnia-Herzegovina stand alone for failing to take any steps towards enacting workable immovable property legislation covering property taken during the Holocaust and Communist eras.

Baroness Deech DBE QC, a supporter of the restitution campaign, gave a passionate speech during the conference in which she openly challenged Poland over its record. “Sometimes it feels like Poland is just waiting for Holocaust survivors to die so the issue can go away,” she said.

She added: “Restitution was to have been a condition of entry into Europe for Poland. It has gone back on that promise.”

In some countries, important areas of the law regarding restitution does not yet meet the standards of the Terezin Declaration. For example, Croatia, Lithuania, Macedonia, and Slovenia limit eligible claimants to those who are currently citizens of their respective countries, the Study says.

Ownership over many formerly Jewish religious and communal properties in Latvia remains in dispute and are not subject to current restitution legislation.  Croatia, where the restitution law passed in the early 1990s covered only Communist era property confiscations, excludes property that was taken during the Holocaust, and does not cover properties that were owned by different Jewish legal entities.   In Poland, fewer than half of 5,550 Jewish communal property claims filed under the 1997 restitution law have been adjudicated.

The level of compliance to the Terezin Declaration has been lower for confiscated, heirless property than for any other form of immovable property, and a dozen European countries have not enacted special heirless property laws. Among them are Bosnia-Herzegovina, Bulgaria, Croatia, Czech Republic, Denmark, Estonia, Latvia, Lithuania, Luxembourg, Montenegro, Slovenia and Poland. In the case of Hungary, the country has taken certain legislative measures with respect to heirless property since 1997, but the Jewish community views these measures as only a “down payment” by the government against the value of all heirless property in Hungary, it was reported.

During the conference, “Unfinished Justice: Restitution and Remembrance”, members of the European Parliament called on the European Commission and all Member States to each appoint Special Envoys for Holocaust Related Issues, including restitution, to accelerate activities aimed at securing justice for victims.

He added: “The support of the European Parliament sends a strong signal about the importance of fulfilling the pledges countries made under the Terezin Declaration. Countries have a moral obligation to ensure that workable property restitution laws are put in place and we hope that they will respond by re-affirming their commitment to providing justice for the remaining survivors, their families and Jewish communities as a matter of urgency.”

Former Israeli Deputy Prime Minister Natan Sharansky also attended the conference. Speaking on behalf of the State of Israel, he said:  “It is high time that all signatories to the Terezin Declaration take full responsibility to implement their commitments. This is not only an issue for individual states, it is a multilateral European concern.”

President Tajani’s support was welcomed by Gunnar Hökmark MEP and Chair of the European Alliance for Holocaust Survivors: “On behalf of the EAHS, we sincerely welcome the support of President Tajani, and are heartened by the recognition that has been shown towards the crucial issue of restitution. We urge the European Parliament to continue to do everything possible to give survivors and their families the peace and dignity they deserve, and help them secure what is rightly theirs.”

Among the most moving speeches came from Holocaust survivors Ben Helfgott MBE and Hania Rosenberg. “Committing to a substantial, broad and coordinated programme of restitution goes some way to recognising the suffering, anguish and torment that occurred directly to those Jews present at the time, and the damage it caused for generations afterwards,” said Mr Helfgott, “There is a moral obligation to the survivors and the dead, to memory and identity, the link of families to their roots and repairing a historic injustice.”

Mrs Rosenberg described her struggle to claim property stolen from her grandparents in Poland during WW2. She said: “I have met with a great deal of obstacles over the 26 years this has been going on. My conclusion is that the demands required from us in order to retrieve our legacies are unjust and should be openly declared as such. Many survivors, like my mother, have passed away or were forced to give up their efforts to recover their property. They do not have the necessary strength or the time left to pursue the struggle as the process is extremely time consuming. The clock is ticking for all of us.”

Launching the ESLI study at the conference, Anežka Nekovářová, Director of the European Shoah Legacy Institute, said: “During the Second World War, over six million Jews were systematically murdered and millions were imprisoned or exiled. Entire families and communities were destroyed or completely wiped out. Today, more than seventy years later, many victims and their families are still awaiting justice. The devastation of EuropeЂs Jewish communities is even more outrageous when you consider the fact that the looted personal and immovable property contributed to their own death.”

Following the conference, organisers urged the European Union to agree “to provide technical advice and support to assist and monitor  various restitution processes in Member States and to encourage  the implementation of the Terezin Declaration.”

MEPs were also asked to formally declare their ‘enduring commitment to the provision of adequate and immediate social welfare support for Holocaust survivors, the demarcation, protection and preservation of Jewish cemeteries, mass graves and other burial sites, the preservation of Jewish heritage sites, and the promotion of Holocaust education, research and remembrance.”

The conference was organized by the European Alliance for Holocaust Survivors (EAHS), a coalition of Members of the European Parliament committed to issues impacting Holocaust Survivors, the World Jewish Restitution Organization (WJRO) and the European Shoah Legacy Institute,  together with the European Jewish Congress  and B’nai B’rith International as well as the Permanent Missions of the State of Israel, the Czech Republic and the United Kingdom to the European Union and their respective Ministries of Foreign Affairs.

The ESLI Study was completed by a team led by Michael Bazyler, professor of law, author and The 1939 Law Scholar in Holocaust and Human Rights Studies, and included assistance from Terezin governments, stakeholders, pro bono attorneys, and experts in the field of property restitution.

About ESLI: ESLI was created in 2010 to establish international solutions for the restitution of immovable property, art, Judaica and Jewish cultural assets stolen by the Nazis; social welfare for Holocaust survivors and other victims of Nazism; and the promotion of Holocaust education, research and remembrance.

A full copy of the report as well as an overview and an executive summary can be found on the European Shoah Legacy Institute website at http://shoahlegacy.org/

Why does Lithuania stand out as Belarus’ staunchest ally?