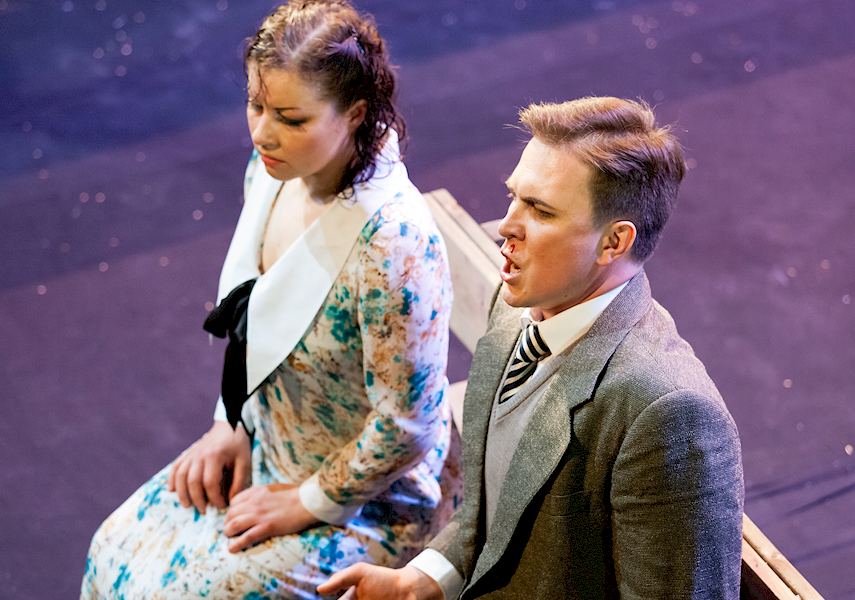 Tchaikovsky in “Eugene Onegin” is starting to set the chilly Arctic darkness of his later opera, “The Queen of Spades,” also inspired by Pushkin, which is far more intense and devastatingly destructive. It is evident in the lead protagonist himself, who has a similar recklessness to Hermann in “The Queen of Spades” and also in the intense heart-stabbing orchestral score, led by conductor Robertas Servenikas.

The title role in “Eugene Onegin” is performed with true volcanic passion by Eugenijus Chrebtovas, a restless, selfish man who doesn’t seem to know what he wants from life, toying with sisters Tatyana and Olga and killing his best friend Lensky in a duel. He isn’t a monster as he genuinely regrets his faults and actions deeply; more a self-destructive whirlwind who sweeps up anyone in his path. Chrebtovas is admirable in the leading role, convincing in his pain, wild impulsivity, and anguish throughout.
Despite craving a little more opulence and glitz from the ball scene, Zinovy Margolin’s set designs were impressive enough, often reflecting the characters’ moods as the full moon, the falling snow, and the composition of characters on stage is as carefully considered as any painted art gallery masterpiece.

Onegin aimlessly wanders the world after rejecting the lovely Tatyana (Julija Stupnianek) and then returns at a ball years later where Tatyana is now princess, married to Prince Gremin. He wants her back; in human nature we are always wanting what we can’t have. When it is there for the taking, there is no challenge.
Tchaikovsky’s love for the character of Tatyana is clear throughout the opera; she is perhaps the most well developed personality, full of childish longing, love, and sadness, becoming ever more elegant and refined despite the anguish she suffers due to Onegin’s careless behaviour.

Onegin cannot understand why he can’t repeat the past, sewing up the mistakes he made and winning back the heart he was once handed by Tatyana. It causes one to think of the classic novel “The Great Gatsby,” with Gatsby a man who also stubbornly believes he can recreate the past. “Can’t repeat the past? Why, of course you can.”
Except it has long slipped from his grasp; Onegin can no more possess Tatyana than he can reshape the moon.