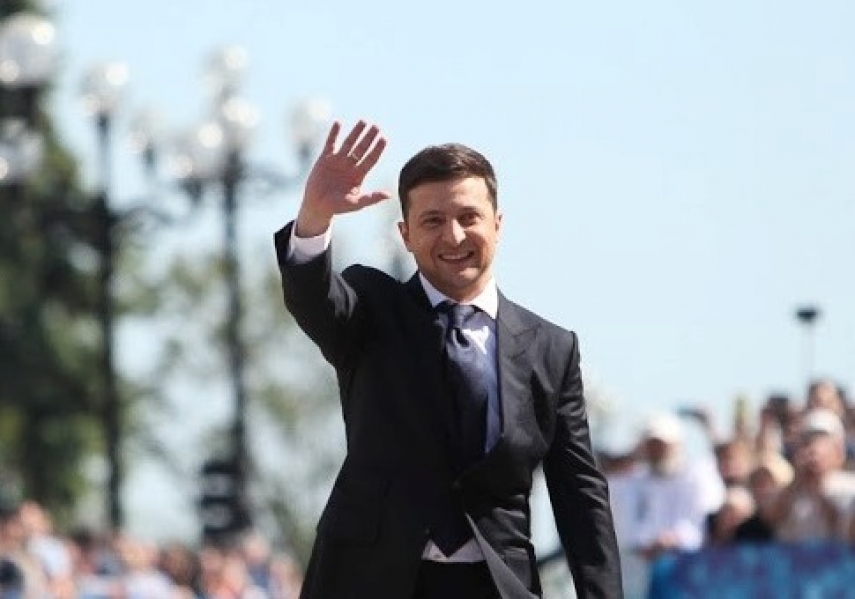 RIGA - The agenda of Ukrainian President Volodymyr Zelensky's upcoming visit to Latvia includes meetings with top Latvian officials and the local Ukrainian community, a tour of the Museum of the Occupation of Latvia, unveiling a memorial plaque, as well as other engagements, LETA was told at the Latvian president's office.

Ukrainian First Lady Olena Zelenska will be accompanying the Ukrainian president on his visit to Latvia, which is scheduled for October 16.

The Ukrainian presidential couple will be given official welcome in the square outside Riga Castle, which will be followed by a meeting with President Egils Levits, talks between two countries' delegations, as well as a statement of Levits and Zelensky to the media.

The meeting of the Latvian and Ukrainian presidents is expected to focus on bilateral ties, relations between the European Union and Ukraine, as well as the Three Seas Initiative.

During his stay in Riga, Zelensky will also visit Riga Ukrainian School and take a tour of the Museum of the Occupation of Latvia and meet with representatives of Latvia's Ukrainian community.

At the end of his visit, the Ukrainian president will unveil a memorial plaque at 6 Antonijas Street devoted to the opening of the Ukraine's diplomatic mission in Riga in 1920.

As reported, after his weekly meeting with Prime Minister Karins on Wednesday, Levits told journalists that he plans to discuss with his Ukrainian counterpart bilateral Latvian-Ukrainian relations, which in the president's opinion can be regarded as good both in trade and political cooperation.

"I would like to discuss with the Ukrainian president his perspective on domestic and foreign matters, his reform plans. We will have the opportunity to brief each other on our position on various issues," Levits said.

Speaking of trade relations, Levits noted that both Latvia and Ukraine are involved in the so-called Three Seas Initiative in which countries of the Baltic, Black Sea and Adriatic regions develop joint infrastructure projects to foster economic growth in these European regions.

Prime Minister Krisjanis Karins (New Unity) also underlined that Ukraine is a good and close ally of Latvia. The prime minister expects to discuss with Zelensky how to step up this relationship and cooperation in the future.

"At the UN General Assembly I noted that Latvia does not accept any infringement of Ukraine's territorial integrity and called on other countries to also support this position. It has to be voiced internationally in order to maintain the policy of non-recognition of the annexation in the long term. We, Latvians, know very well what it means, because in our case Western countries followed this policy for 50 years until the Baltic states regained their independence. Now, it is important to Ukraine as well," the Latvian president said.