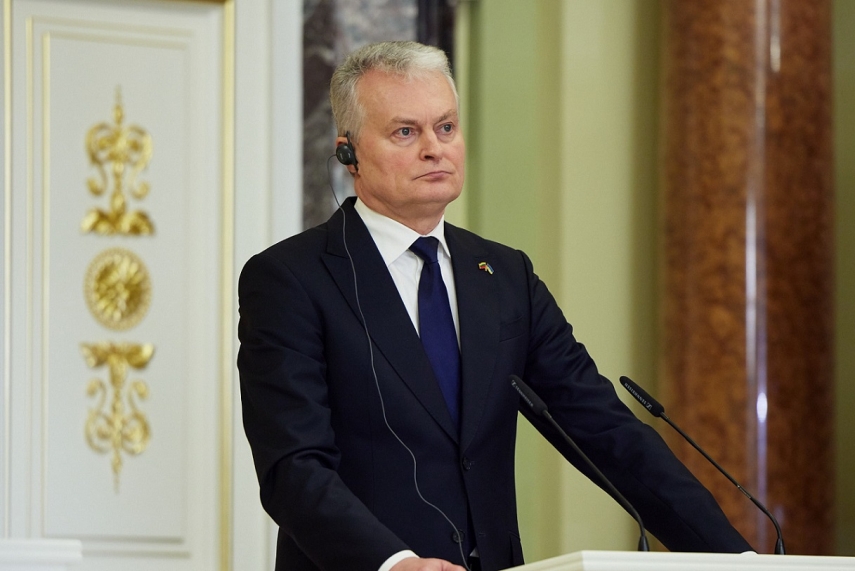 VILNIUS – NATO must clearly name Russia as a key threat to entire Euro-Atlantic security after it started a war in Ukraine, Lithuanian President Gitanas Nauseda says, adding that the Alliance must make decisions on the security of the Baltic region at the forthcoming NATO summit in Madrid.

"Putin started with Ukraine. But obviously, he has bigger plans. Such as destroying the entire Euro-Atlantic security architecture," the Lithuanian president said on Monday, addressing participants of the NATO Parliamentary Assembly's plenary session in Vilnius.

He also pointed out that NATO had received Russian demands and ultimatums "with very clear references towards the Baltic region, too." As Belarus has de facto become part of Russia, the Baltic region's security has changed dramatically, and the time for NATO to react shrinks almost to nothing, the Lithuanian president said.

"Thus, we must do everything it takes to make sure Putin never dares to test our boundaries and NATO’s resolve," Nauseda said.

The ongoing war in Europe requires immediate changes in NATO's deterrence and defense posture, the Lithuanian president said, adding that the battalion-sized enhanced forward presence needs to be upgraded to the brigade level.

"We must realize that the Russian threat will not disappear for years to come. Thus, we must clearly name Russia as a key and long-term threat to the entire Euro-Atlantic area," the Lithuanian leader said.

Russia has made a deliberate choice to destroy the world order as we know it, he said. After February 24, we should not have any illusions about that and "we must realize that our hesitations, passiveness, and appeasement will only encourage further aggression".

The Lithuanian president also expressed his shock over emerging calls for Ukraine to seize part of its territory to Russia to end the war.

"We are navigating through very dark and difficult times. We have each other and shared values to rely on. It is a priceless pillar we should never doubt or trade. We also have a collective obligation to stay on the right side of history," the Lithuanian president said.

The Seimas of Lithuania is on Monday hosting a plenary session of the NATO Parliamentary Assembly to discuss the ongoing war in Ukraine and threats posed by Russia.

The assembly was to be held in Kyiv, but due to the Russian invasion of Ukraine, the event had to be urgently moved to a safer location, and the Lithuanian Seimas proposed to hold it in Vilnius.