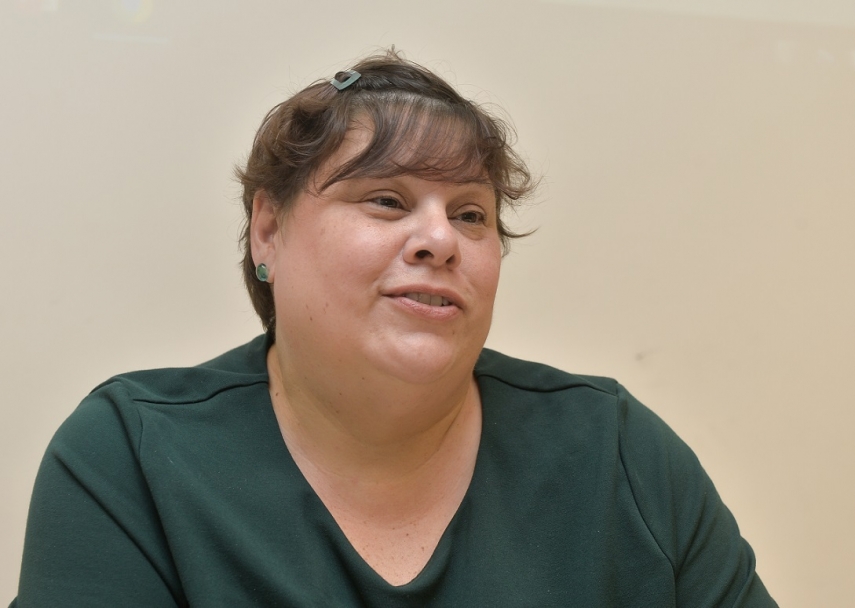 American Indian Kristina Schimmels from U.S. Says Historical Injustice is Better Understood Due to Her Own Background

I feel an affinity with Lithuanians due to my Native American Indian background, she says

This past summer, after her mother passed away in Oklahoma, Mykolas Romeris University (MRU) Lecturer Kristina Schimmels did not visit the U.S. as she did every summer for the past 8 years. Despite cousins and siblings who still live in Oklahoma and friends in Chicago, she said she feels “less inclined to go back.“ “I spent most of July crying,“ said Schimmels, who is still mourning the death of her 81-year-old mother, who passed away in March. A member of the Indian Choctaw tribe, she now calls Vilnius home.

How did you end up in Vilnius?

I was living in China. I was constantly getting sick. I had friends in Vilnius, who were teaching at the Pedagogical Institute. It turned out they knew someone who was looking for an English language lecturer. I sent my resume and got a job at MRU in 2013. I‘ve been here ever since. I teach English for Specific Purposes and Modern English and Literature courses. I love my students.

So you came to Vilnius from China? What did you know about Lithuania before coming?

I never expected to move to Lithuania, in the first place. I‘ve always known about Lithuania, but I never expected to live here because it was the Soviet Union, when I was growing up. Also, I had heard about Lithuania from basketball player, now basketball executive Don Nelson who visited Lithuania and played here decades ago. He came to our house, when he got back from Lithuania and told my family how much he liked Lithuania. So, I always knew where Lithuania was, but I never thought I‘d end up here.

You have American Indian blood and belong to the Choctaw tribe. Do you have any special rituals, beads or jewelry that you wear?

I have jewelry – necklaces, that I wear that is beaded and handmade. My grandmother many years ago gave me a beaded necklace that I like to wear, but it broke not so long ago. I also have turquoise bracelets, but I don‘t really wear many bracelets. Many American Indians make beaded jewelry that they later sell. Now many of the beads are just plastic, but years ago there were natural products – from nature, used to make the beads and necklaces.

Do you have any holidays or days which you celebrate with fellow American Indians?

Yes, every year there is an Indian 3-day event, the POW WOW, a festival where we meet and eat, sing, dance. Some of the dancing is in traditional Native American Indian costumes. Unfortunately, it is usually held the first week of September and I can‘t be there. Classes start and I must lecture at the beginning of each September in Vilnius. So, I have missed the POW WOW get togethers due to work.

You said you feel a special connection with Lithuanians due to your own American Indian heritage?

Yes, I am regaining a sense of pride in who I am. I feel such a connection to Lithuania because the Choctaw tribe were oppressed also. My grandmother, Bernice Wade, was only 6 years old when she was sent to an Oklahoma boarding school, after the death of her mother. She was not allowed to speak Choctaw language there. Children were beaten for speaking their native language and my grandmother would talk of being constantly hungry. She was taught to be white and not Indian. I feel the sense of injustice, oppression that my grandmother felt. She was discriminated against because she was Indian. She faced racism her entire life. Therefore, I understand Lithuanians and the occupation here of their country. Now, since Lithuania is free, Lithuanians are learning to be Lithuanian again – to capture who they were before the occupation of their country.

Is there interest about your heritage in Vilnius?

Sometimes I visit schools in Vilnius and nearby cities. I get the opportunity to talk about my heritage at these schools, about Indian customs and the Choctaw language.

Do you speak Choctaw yourself?

No, only a little bit. I know a few words, but not much more.

You are an avid reader and have started a Vilnius book club that meets about once a month. How did this idea come about?

I didn‘t start the book club. There were 6 of us that came together and we all liked to read. There were 4 Americans and 2 Lithuanians from Vilnius University. Each month a different person selects a book for us to read. We meet after about a month, when we have finished the particular novel. We meet in a cafe or a restaurant. One of our favourite meeting places is the Blue Lotus restaurant in Vilnius‘ center. This month we are reading John Steinbeck‘s travel journal called, “Travels with Charley.“

You are well-known as a great cook and hostess. What do you like to cook?

My favourite dish is the Cajun, Louisiana jambalaya. It‘s a Choctaw dish from my tribe which consists of rice, chicken, sausage and spices. I like it because it‘s easy to make and it‘s tasty. I cook it quite often.

I love Lithuanian food. I really, really like cepelinai and koldūnai. I also enjoy stuffed cabbage rolls – balandėliai and potato pudding, kugelis with sour cream. However, I do not cook Lithuanian food, as it is too complicated. I go out to restaurants to eat Lithuanian food. We always go out for cepelinai.

How is your Lithuanian?

I can get by, but I need to learn Lithuanian. I need to study more and learn more.

What are the advantages of living in Vilnius?

The public transport is great. It‘s relatively inexpensive compared to the U.S. I don‘t drive a car and have not during the time I have been living in Vilnius. I can get around with the bus. I had some health issues. I had an injured knee and if not for public transport, I would have had to search for someone to drive me everywhere Also, Vilnius is a pedestrian city and you can walk almost everywhere. I enjoy walking around the city and the Old Quarter.

You have lauded the doctors here and the medical care. You are satisfied with the operation you had?

Yes and extremely happy that “Sodra“ picks up the tab for operations. I had two operations for foot injuries and never paid anything. For just one surgery in the U.S., I would have paid about $30,000, despite the fact that I have health insurance. But in the U.S. I was paying $500 per month for health insurance and my deductible was $1,000. I think socialized medicine, which they have in Lithuania, is a good thing.

Do you plan to stay in Lithuania and continue teaching?

I‘m going to teach here, until I die. I think I‘m going to live in Vilnius for years and years. My passion is teaching and students are my priority.