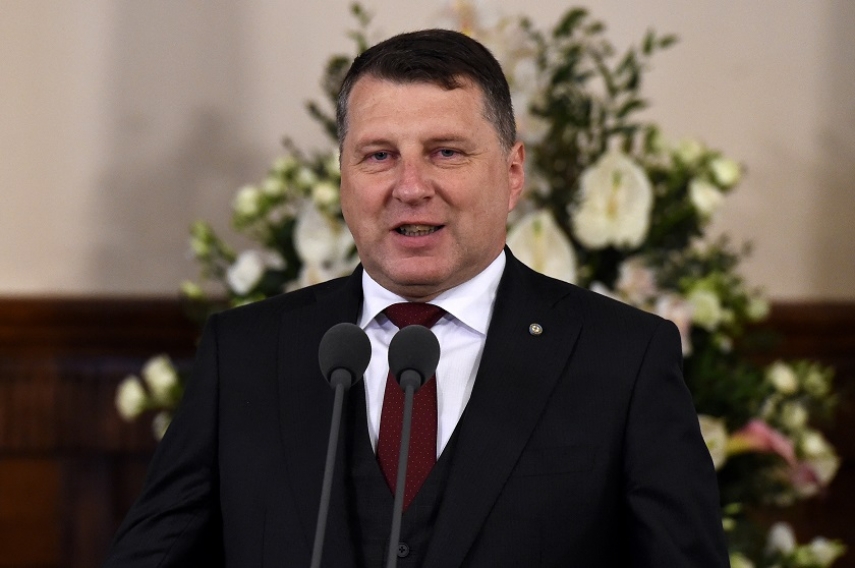 RIGA - At today's May 4 military parade in Madona, on the anniversary of Latvia's restoration of independence, Latvian President Raimonds Vejonis said that in the name of democracy every resident is invited to thing, participate, and, if necessary, fight for the interests of the nationand the country's prosperity.

''28 years ago, our nation’s fortitude overcame a great predominance. Our aspirations for a country mastered one of the most influential empires of that time. We did not know what the next day would bring, but we believed that it would be a better day in a free country,'' Vejonis said.

''Believing in independent Latvia, the then parliament, the Supreme Council, was able to agree and implement the will of the people,'' the president reminded.

''Hence, that was a victory of self-determination over obedience. The choice that gave hope and opportunity for everyone to create the future of their children and themselves. The freedom that our representatives voted for then was more than just a change of political system. It was independence for all and every one of us. Freedom to take responsibility for your own country,'' Vejonis emphasized.

''Then on May 4, 1990, I was at my workplace on Blaumana Street, here in Madona. I remember the excitement, the hot debate about the future and expectations that vibrated around. Moreover, if somebody had said that I would ever become the President of a free Latvia then, I would have not believed him. Then I was only 24 years old! Today, I can assure you here and now, without embellishment that everything is possible in a free, democratic, and independent country,'' the president said.

''Then Latvians, Russians, Poles, Jews, Belarussians, Greeks, and representatives of other nationalities took a firm stand for Latvia. Both in Riga and all the regions of Latvia, people convened, expressed their opinions and intention to shape a new Latvia, so that they would always be proud of it. Therefore, by democracy, today everyone is invited to think, to take part, and to fight if necessary for both their interests and the interests of their own region and for our shared prosperity,'' he emphasized.

''Today, I would like to remind of the historic vote on May 4, and I call you to perceive the elections to the thirteenth Saeima this autumn with the same sense of responsibility. Only participation in the polls can fully confirm that the right to decide for their future must be invested in all the people,'' Vejonis said.

''Now, the military parade in Madona is not a demonstration of power and aggression. It is a testimony to the protection of peace and national defense. We assert that we are ready to defend our motherland and its inhabitants with arms and armor against any enemy,'' the president went on to say.

''Hence, our troops stand alongside our fortitude. On a daily basis, we are guarded by thousands of experienced territorial, navy, and air soldiers. At the crucial time, many national guards and our reservists will come to their aid,'' Vejonis said.

''I extend my immense and genuine gratitude to them on behalf of everyone. I also thank border guards, police, firefighters, and everyone who serves their fatherland fearlessly. Of course, I also appreciate the young defenders of our country,'' he added.

''You see today that we are not alone! Today, our allies from Canada, Poland, Italy, Spain, Slovakia, Albania, Slovenia, and, of course, the United States of America join our soldiers in the military parade as our partners. It is a testimony to the whole world and every inhabitant of Latvia that we are not alone. Thank you, our allies, for being here,'' Vejonis said in his address.

''Today, Latvian troops have prepared for the parade in my hometown of Madona. Everyone comes from his or her own region, and everyone is ready to protect every part of Latvia: Riga, Vidzeme, Kurzeme, Latgale, and Zemgale,'' the president emphasized.

''So many young, energetic, and patriotic people from all parts of Latvia join the Latvian National Armed Forces and the National Guard on a voluntary basis! Men and women who devote their time and their efforts to strengthening the defensibility of our country,''' he went on to say.

''Looking at you, I do not doubt a moment that the decisions made on 4 May 1990 are recorded for the good! Let us meet today at the laid white tablecloth and celebrate this day! Let us remember the events of recent past! Moreover, I wish the same unity ruled and guided us nowadays as well,'' Vejonis said.

''I wish everyone felt like a soldier deep in his or her heart and deeds with adamantine ardour and ready to stand in the guard for freedom of Latvia at any time! Let us shape and protect our free and democratic country every day!,'' said the president.