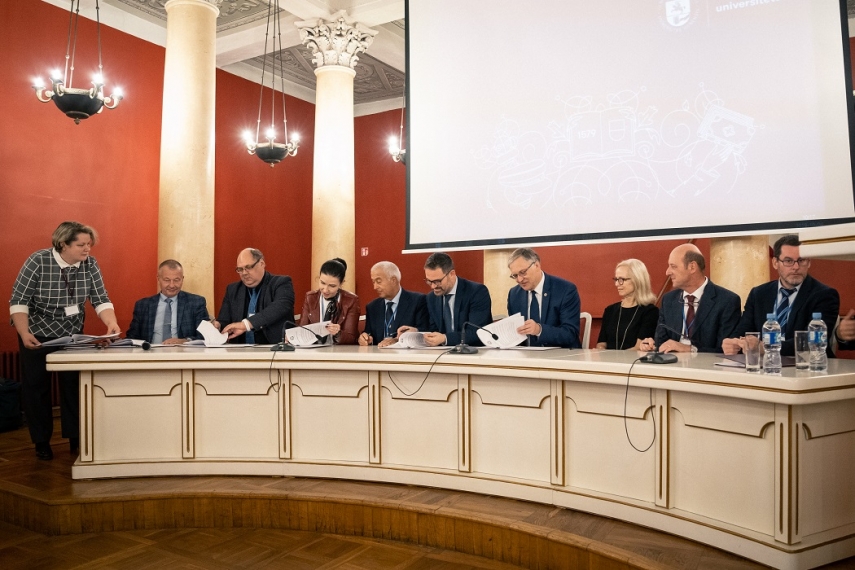 Last Friday, 4 October, the founding members of theAlliance4Life gathered at Vilnius University to sign a Memorandum of Understanding. Alliance4Life connects 10 leading life science institutions from nine countries in Central and Eastern Europe that have joined the European Union since 2004.

The mission of Alliance4Life is to support research excellence in New Europe and to strengthen its impact on society, human health and quality of life. The alliance started two years ago and has since developed a strategy that will be implemented in the coming years in all seven of its agreed focus groups: science evaluation; ethics and integrity; human resources and mobility; grants and funding; core facilities; knowledge and technology transfer; and science communication.

ToivoMaimets, a professor of Cell Biology at the University of Tartu, says that the 13 countries which have joined the European Union since 2004 are home to many talented scientists, collectively accounting for around 17% of all researchers in the EU. However, he adds that full use has yet to be made of their potential within the union. He explained that the members of Alliance4Life have spent the last two years analysing the reasons behind the innovation gap in the field of natural and health sciences and have given recommendations to universities, governments and the European Commission on how to bridge this gap. “The Memorandum of Understanding provides new impetus in all of our efforts to ensure that one day there will no longer be any need for ‘enlargement instruments’ or other catch-up measures in European Union research programmes,” he said.

Erik Puura, the Vice-Rector for Development at the University of Tartu and one of those who signed the memorandum, agreed that the gap in science funding and in the strength of research centres of excellence remains significant between older and newer Member States of the European Union. “The University of Tartu is one of the main partners in Alliance4Life and stands to gain a lot from it, since it will give us the chance to work with others and contribute to shaping policy,” he said.