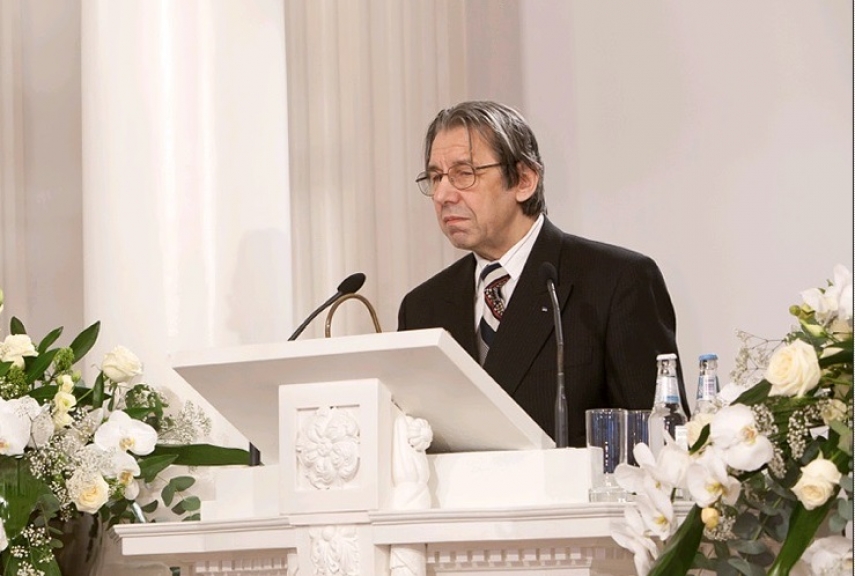 At the ceremony dedicated to the 100th anniversary of Estonia’s national university, the University of Tartu award for contribution to Estonian national identity was presented to poet, publisher, essayist and national thinker Hando Runnel.

Hando Runnel has passionately and effectively promoted the Estonian ethnic and national identity. His creative work centres on the poet’s relationship with his homeland and people, and with the great problems of life and society. At the decisive moments of restoration of independence in Estonia, he was one of the ideologists of freedom. He put Estonia and Estonians and the idea of our existence into words, determining the future of Estonia by these words. During difficult times of oppression, his well-known songs and poems helped to keep up people’s belief in the survival of Estonianness and hope for independence.

One example of Runnel’s work, carried by his sense of mission, extensive knowledge and intellectual curiosity, is the series of essay collections by Estonian thinkers, “Eesti mõttelugu” (“The Story of Estonian Thought”). The book series, which has been called “a national epic of essays” and “the encyclopaedia of Estonian intellectual life”, brings together and publishes the most valuable treasures of Estonian thought throughout history – collecting and adding value to what has already been published, and enabling the reader to enjoy the works of great Estonian men and women.

In addition, Runnel has influenced and directed national-mindedness as the first invited professor of liberal arts of the University of Tartu and as the refounder of the magazine Akadeemia. At the peak of the new national awakening he was one of the leaders working towards the reopening of the Faculty of Theology at the University of Tartu: he was convinced that a universitas must definitely comprise a school of theology and that the faculty which was closed by the Soviet authorities in 1940 had to be reopened.

A productive essayist, publicist and critic, Runnel in his writings draws attention to the challenges and sore spots of society, and to values we all should strive for, keep, hold dear and appreciate in order to ensure high level of intellectuality and cultural identity.

Above all, Runnel is beloved by Estonians as a poet; his poetry is carried by his love for his people and children. Runnel’s poetry has been described as having two main facets: his earlier works have been called the poetry of sunshine, and since 1970s, the poetry of destiny. Runnel who celebrated his 80th birthday last year admits that his prime years as a poet were the end of 1970s and beginning of 1980s. Yet he publishes new works to this day.

Hando Runnel has been called the greatest and most influential crossover writer in the Estonian literature. The themes of his poems speak equally to readers of all ages. He bravely and skilfully interprets different topics and areas, without fear of taboo subjects.

Runnel’s poetry is highly musical. Estonian musicians have compared his poems to songs, claiming that melody and rhythm has already been written into them. Probably this is why so many of Runnel’s verses have found a way to people’s hearts in music.

According to Toomas Asser, Rector of the University of Tartu, the decision of the award committee was unanimous. “Granting the “Contribution to Estonian National Identity” award to Hando Runnel is a telling summary of the first century of Estonia’s national university. By giving this award, the national university confirms that Estonian people and the Estonian language, culture and thought are free. Hando Runnel by his example and with his special contribution helps us remember that the measure of a nation is its people’s internal dignity and values.”

The University of Tartu has issued the award for Contribution to Estonian National Identity 16 times.