To the moonwalk and back 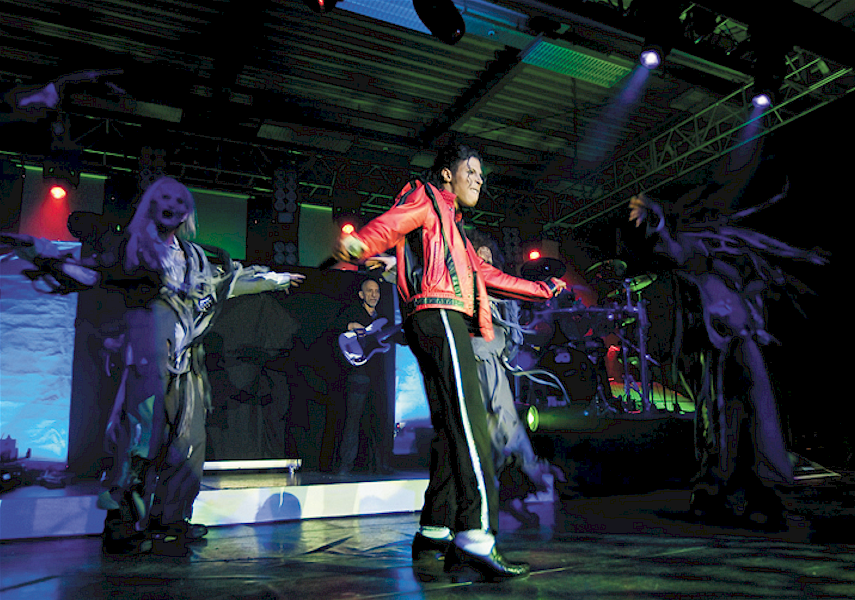 TALLINN - Idol...Icon...Superstar...Legend. Few entertainers achieve this level of success. Michael Jackson was, is, and always will be held in this highest regard. Perhaps no other performer in history has had such an enormous influence in defining pop music for his generation and generations to follow.

It was with the greatest of love and respect for Michael’s legacy that The Ultimate Thriller was created. For anyone fortunate enough to have witnessed Michael Jackson’s live shows, the experience was unlike any other. It was with this in mind that The Ultimate Thriller chose to re-create some of Michael’s most memorable concert moments.
But this was so much more than just putting together a show and going on tour. For the star of our show, it was about getting an amazing opportunity to perform the songs of the artist he’s adored the most his entire life, in front of thousands of people.

For the dancers, it was a chance to learn and execute some of the world`s best known choreography. For the band, it knew they were going to get to play some of the best music ever produced. And for the production staff and crew, it was about bringing out the best in the performers and being a part of something truly special. To achieve this monumental task would require people with an intimate knowledge of Michael and the inner workings of his live show.

“Keeping Michael’s spirit alive is our first priority,” says Robert Hyman, The Ultimate Thriller show producer and drummer.
The Ultimate Thriller – The Tribute to Michael Jackson is the most authentic and exciting musical bow to Jackson’s legacy. It was created with the greatest admiration and respect for Jackson and will usher in the 25th anniversary of his #1 smash award-winning worldwide BAD release and Guinness World Record breaking BAD tour (for the largest grossing and attended tour in history).

For millions of people Michael Jackson was an idol. For nearly four decades he formed pop music culture worldwide. He wrote the soundtrack for an entire era, influencing fashion, lifestyles and dances of generations in the process. He was one of the most successful artists in pop history, selling more than 750 million albums – including Thriller, charting 14 number one songs in the US, winning 18 Grammys, and performing the single most successful series of concerts at London’s Wembley Stadium.

The Ultimate Thriller combines parts of two of Jackson’s legendary tours: the “Bad World Tour” in 1987 and his “Dangerous World Tour” in 1992 to bring his best hits live on stage once again: “Man in the Mirror,” “Black or White,” “Beat it,” “Billie Jean,” “Thriller,” and many more unforgettable songs. The two-hour spectacle also includes The Jackson 5 hits along with other selections.

The onstage lineup for The Ultimate Thriller includes E’Casanova who many believe portrays the most accurate rendition of Michael Jackson in the world.
Audiences will be amazed at E’Casanova’s perfect emulation of Jackson’s persona, voice and dance. Together with an on-stage cast of 11, state-of-the-art sound and video, an incredible light display, authentic costumes and stirring choreography (including the legendary moonwalk), this extraordinary, multimedia-based tribute is guaranteed to keep Michael Jackson’s legacy alive for years to come.

To re-create some of Jackson’s most memorable concert moments, a monumental task, individuals with an intimate knowledge of Michael and the inner workings of his live show were recruited. The Ultimate Thriller production team includes LaVelle Smith, a five-time MTV Video Music Award winner for best choreographer and a principal dancer for Michael on the “Dangerous,” “Bad,” and “History” tours, Mic Thompson, who spent eight years as a principal dancer for Michael and can be seen in the videos for “Dangerous” and “Ghosts,” and Michael Prince, Michael Jackson’s longtime personal recording engineer. Their insight and experience with Michael Jackson have been instrumental in providing unparalleled authenticity to the production.

While Michael can never be replaced, fans can relive the magic with this spectacular show and share his legacy with new generations. For those who missed the opportunity to see his magic on stage, this is it! Add in state-of-the-art-sound and video, an incredible light show, costumes and stirring choreography (including the legendary moonwalk), not to mention Jackson’s greatest hits and you have a guaranteed formula for an extraordinary, multimedia-based tribute super-show!
Just as the appeal of Michael’s music spanned multiple generations, so does the homage paid by The Ultimate Thriller. The show brings together youthful passion and time-tested wisdom with only one goal: share in the magic, the music and the energy that Michael gave all of us.