The Tartu Call promotes the development of healthy lifestyles throughout Europe 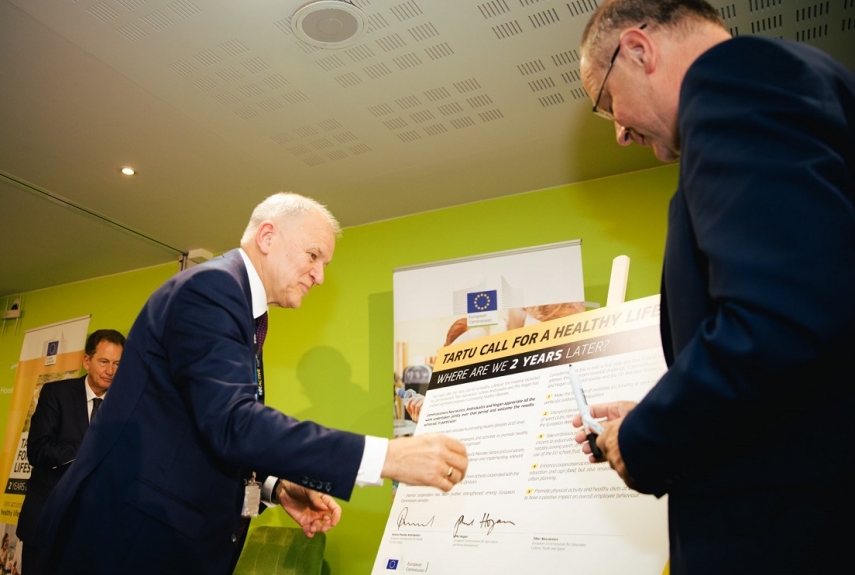 This week a summary was made in Brussels of the Tartu Call for a Healthy Lifestyle, announced in the year 2017 during the European Week of Sport in Tartu, when Estonia held the Presidency of the Council of the European Union. The call made the European Commission make 15 commitments for furthering healthy lifestyles.

The initial results indicate that since the Tartu Call, the European Commission has allocated more funds, increased awareness and gained new knowledge, in order to fight against unhealthy diets and obesity, as well as increase the physical activeness of people. The call encourages member states and civil society to contribute to the development of public health.

„While every fourth Grade 1 student in Estonia is overweight and more than half of adults are insufficiently physically active, such agreements which cover different fields and are made on the European level are very important. More important is that each one of us stands up for our diet, physical activeness and healthy lifestyle, spends time actively with our family and through that makes life better in Estonia“, said the Minister of Culture Tõnis Lukas.

The main results include:

1.       Increased funding. In the last two years, the European Union budget, supporting healthy lifestyles has grown continually. The budget for projects promoting physical activity, for example, has nearly doubled, growing from 6 million Euros in the year 2017 to close to 11 million Euros in 2019. In the framework of the EU Promotion Policy for the year 2019, 8 million Euros have been specifically dedicated to support healthy eating campaigns. Additionally, through the EU third health programme co-funding to the extent of 6 million Euros will be provided for a measure that shares best practices in the field of nutrition between European countries.

2.       Increased awareness. The EU School Scheme, which has an annual budget of 250 million Euros, is used to support the distribution of fruits, vegetables and milk to schools throughout the EU and is also used for increasing the awareness of the benefits of healthy eating. In the academic year 2017/2018, the programme reached more than 20 million children.

3.       Better knowledge. The European Commission released as part of the Tartu Call new country factsheets, which have been compiled with the cooperation of the World Health Organisation and which provide information about physical activity levels and promotion policies within the EU member states. The aim of the factsheets is to support evidence-based policies and to ensure that policy makers can rely on solid evidence to encourage people to be active.

In the year 2017 the Tartu Call for healthy lifestyles, was made at a seminar organised in Tartu, as part of the opening of the European Week of Sport, when Estonia held the presidency of the European Union. The call warns about the dangers of obesity of children, unhealthy diets and insufficient physical activity. The call also includes 15 commitments for furthering healthy lifestyles, which unit many fields such as, sports, nutrition, health, innovation and scientific research.