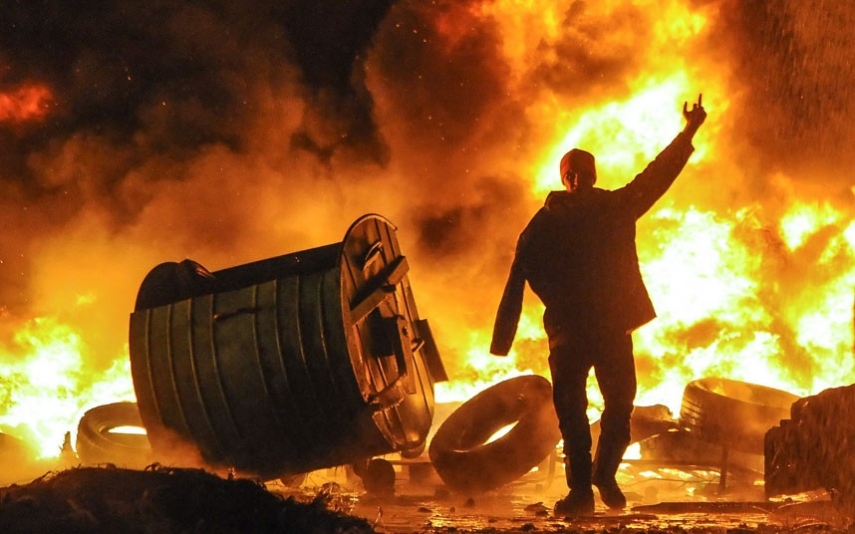 Riots once again broke out in Kiev on September 31 [Image: The Daily Telegraph]

Yesterday’s violent clashes in the heart of the Kiev — with grenades thrown towards the parliament, and eye-witnesses on the streets of Kiev reporting to the BBC about 'seas of blood’ — were horrifying to read about, but worryingly unsurprising to those who have been keeping track of the rising nationalism throughout the country.

Hundreds of people were wounded. According to the Ukrainian authorities, the initiators of the violence were representatives of Svoboda party, the well-known Ukrainian ultra-nationalists who are fighting hard now against the Minsk Accords, and are rejecting very idea of a peaceful solution to the conflict in Ukraine.

Svoboda was not alone at the bloody and violent protests against the ceasefire deal brokered in Minsk who were storming the Ukrainian parliament.

Many other ultra-nationalistic radical Ukrainian organisations participated there, including the Right Sector.

The same BBC report showed an interview with a Right Sector representative nicknamed "Byk" ( Bull) explaining the grounds of their protests and boasting of their active participation.

Since the beginning of the Ukrainian conflict, I have been wary of the rise of nationalism.

Starting from February 2014, I have underlined the risks involved with legitimising armed radical organisations. A vocal minority were showing, right from the outset, tendencies towards neo-Nazi ideologies.

Finally, some steps have been taken: a few months ago the US Congress issued a special amendment while voting on the US aid to Ukraine — specifically depriving neo-Nazi and other radical Ukrainian, ultra-nationalistic units of US-provided aid.

But is it a bit too little and clearly too late?

The Ukrainian leadership has committed a grave mistake by collaborating with these organisations, by giving them even an ounce of institutional credibility, in the first place.

The senior partners of Ukraine, both in the US and Europe, although slowly awakening to these all-too-well-known dangers, have been too inarticulate throughout in their insistence of eliminating the possibility of the rise of neo-Nazism in Ukraine.

Other supporters of Ukraine have just buried their heads in the sand when it comes to Ukrainian nationalism.

Among the most naive and deluded have been the leaders in the three Baltic States of Latvia, Lithuania and Estonia.

Since day one of the conflict in Ukraine, the Baltic States have been quite united in their unequivocal support of what they believe to be a new Ukraine on its path to European integration.

From the standpoint of foreign policy, it was an understandable move, especially at the beginning of the Maidan protest movement.

But then the Ukrainian realities became more and more disturbing. Namely, the outpouring of love to the darkest figures of Ukraine’s past.

The leadership of all three Baltic States have turned a blind eye to this in a way that is scarcely understandable.

This is all the more surprising considering the history of all three countries when it comes to the Holocaust.

And still more surprising, given the unspeakable crimes and limitless hatred shown towards the Baltic nations — in particular, towards Lithuanians — by the new historical heroes of Ukraine: Stepan Bandera and Roman Shukhevych, for instance, who both led organisations of Ukrainian nationalists.

Maybe, it would be worthwhile to recall at this point the existing resolution of the European Parliament voted for back in 2010.

“European Parliament 20. - Deeply deplores the decision by the outgoing President of Ukraine, Viktor Yushchenko, posthumously to award Stepan Bandera, a leader of the Organisation of Ukrainian Nationalists (OUN) which collaborated with Nazi Germany, the title of ‘National Hero of Ukraine’; hopes, in this regard, that the new Ukrainian leadership will reconsider such decisions and will maintain its commitment to European values.

The resolution instructs its President to forward this resolution to the Council, the Commission, the Member States, the Government and Parliament of Ukraine and the Parliamentary Assemblies of the Council of Europe, the OSCE and NATO”.
As far as the public knows, this resolution has not been annulled".

If Ukrainians were upholding historical figures unofficially, it would be bad enough. But the government in Kiev has even been naming streets after them, throughout the country.

Several governmental bodies and specially created committees have been preparing for the new school year in Ukraine thoroughly.

Recently, the education minister has proudly announced that “in the new school year, a new concept of the patriotic education will be implemented in the country".

This new concept is mandatory and it includes such nice courses for children, as The Course of Young Patriot for children from 9 year old ones; "I am a Young Patriot" program; psycho-therapeutic Theory of Race for the older students.

Simultaneously, the students in the universities and already graduated teachers will be tough to fit the requirements of this new national concept of the patriotic education". The minister said that “this all is only beginning”.

This promising beginning is in fact, fulfilment of two major recent decisions of the Ukrainian government: in June 2015, the Ukrainian president has signed a decree prescribing establishing a special working panel, and implementation of the Ukrainian National Strategy of the National-Patriotic Education (UNA-OUN) in the country until 2020.

In July 2015, the Ukrainian government has established yet another, their own commission on the national patriotic education.

It has been stated by the Ukrainian authorities, that among the projects conducted within the national patriotic governmental strategy, there are such events as producing the film on the Ukrainian Galician Army, and the annual ceremonies in honour of Bandera on his  birthday.

On presidential decree, the day of the establishing of the UNA-OUN has also become a new national holiday in Ukraine, very important one for them, the day of the Ukrainian Army.

(I have written a series of articles going into depth about this entire process. Part I is here; Part II is here; and Part III is here.)

How can the Baltic States not react to this?

This kind of political selective-vision may not be that unique in history.

Leaders justify it as support for 'a lesser evil' — a useful weapon in their arsenal of political tactics.

But turning a blind eye to the past can often back fire. It risks tarnishing the reputation of any statesman - or stateswoman, for this matter -  who opt to recklessly forget historical facts.

In this case, the back fire will come when historians look back in consternation at countries like Estonia, Latvia and Lithuania who did not speak out against the very obvious neo-Nazification of Ukraine.

Since the beginning of the Ukrainian conflict, it has been absolutely possible to achieve the goal of stopping this hysterical neo-Nazification in Ukraine.

It could have been possible, and still can be, to condition the Ukrainian leadership’s behaviour on their path towards the West with firm demands issued to them by Western, European, Baltic leaders.

These demands could stop the historical rehabilitation of nationalists who were Nazi collaborators, while helping Ukraine become a country that truly upholds European values.

There have even been attempts in the West to do so, which the Baltic leaders seem to have ignored.

Right at the beginning of the conflict in Ukraine, the European Parliament did accept a special written motion by the Finnish MEP Hannu Takkula, placing support for the integration of Ukraine into the EU on the condition of that country adopting a zero-tolerance approach to the blossoming in Ukraine of the glorification of Nazi collaborators.

Why was it so difficult for the Baltic leaders to see this? In 2013, my husband, the artist Michael Rogatchi, and I participated in a series of state events in Lithuania in commemoration of the 70th anniversary of the extermination of the Vilnius Ghetto.

We saw and spoke with the Lithuanian president at many of those events. We believed then that she was sincere in her attitude, her words, and her feelings which were palpable.

We also saw President Grybauskaite at Auschwitz at the commemoration of the 70th anniversary of its liberation.

We saw a person who did felt an adequate pain there. I am still waiting to hear from her and her colleagues, the Baltic leaders, on their reaction and attitude on the current Ukrainian policies on glorification of the Nazi collaborators and the steamy neo-Nazification of the country.

I am just curious - and I do know that very many people are too - for how long are we all supposed to wait?

Among the leading politicians in the region, who were all supporting Ukraine in the beginning of the conflict - mainly due to the understandable reason of its drifting away from under the Kremlin’s wing - two groups have subsequently formed.

The one group consists of those still supporting Ukraine, almost unconditionally, it seems — often for the sake of support and to re-confirm their strong Western orientation; the other group consists of those people who were shuttling to Ukraine and back very enthusiastically in the beginning, but then slow down having witnessed a wild party of the heavily racist, often anti-Semitic, and extremely arrogant atmosphere there, with rapidly growing fashion for neo-Nazism in the current Ukraine.

Those politicians stopped to visit Ukraine, stopped to talk about how great and promising the situation there is.

Some of them were insulted there personally, the same as Mikhail Khodorkovsky was when he did rush there among the first supporters, and somehow did not repeat his visit there ever since.

The second group of politicians do see the things in Ukraine as they are; they stopped to be vocal in their support.

But they are also numb in their rejection of the progressing dangerous and unacceptable neo-Nazification process there.

It is very daring to be a Western politician with a good reputation of a liberal and a promoter of the European values and to start to criticise Ukraine nowadays.

But why is this so? To be anti-Soviet, anti-Kremlin and anti-totalitarian does not mean to be manipulative, blind, ignorant, or not exactly honest.

It also does not mean to be pro-Nazi. I hope that many of good European and Baltic politicians will wake up to this simple fact of life.

Her forthcoming book is Dark Stars, Wise Hearts: Personal Reflections on the Holocaust in the Modern Times.

After national premiers of her film The Lessons of Survival: Conversations with Simon Wiesenthal in Australia, France and the USA earlier this year,  the film will be shown as the Special Commemorative Film series in Israel in October 2015.

She is the recipient of the Patmos Solidarity Prize 2014 for 'for the passionate and creative approach in a hard labour of memory'.

She was also awarded the Special Honourable Diploma for her 'contribution into the Holocaust education world-wide' by the Chicago Film Festival in June 2015.